Details on the date, time, and route are expected this morning. 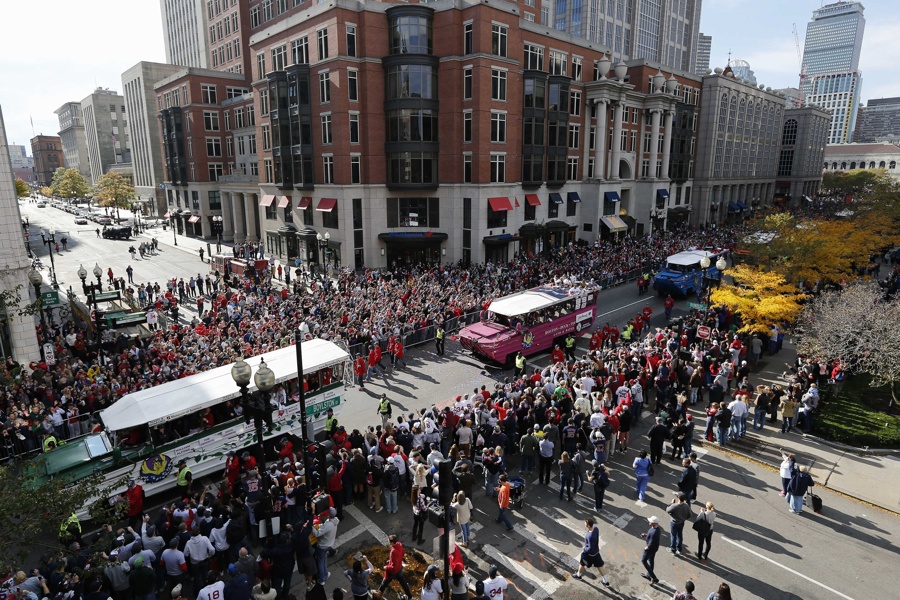 The Red Sox have won the World Series, and you know what that means: It’s time to call out of work, stuff Bud Lights in your windbreaker, and head to downtown Boston for yet another duck boat parade.

Congratulations to the #WorldSeries Champion Boston #RedSox! What a team. What a run. Thanks for the ride, all year long. Who’s ready for a duck boat parade? #DamageDone https://t.co/Kj9l2VVvuw

The parade will begin at 11 a.m. on Wednesday morning near Fenway Park before making its way up Tremont toward City Hall, officials announced in a Monday morning  press conference. There will not be a rally at City Hall Plaza.

“I’m excited as mayor to host my first Red Sox parade,” Boston Mayor Marty Walsh said. “We hope to see a big crowd out there.”

Here’s the route, according to a new page on the city’s website dedicated to info about the parade:

Parking restrictions will take effect at midnight on Tuesday morning and cars parked along the route will be towed, Boston Police Commissioner William Gross said.

Parking will be off-limits Tuesday and Wednesday on:

Both sides, from Brookline Avenue to Ipswich Street

Both sides, from Ipswich Street to Kilmarnock Street

Both sides, from Boylston Street to Brookline Avenue

Both sides, from Charlesgate East heading towards Fenway Park to Boylston Street (near CVS)

There will be more parking restrictions for Wednesday, which can be found here.

Fans are urged to take public transportation, and there will be additional coach cars on the commuter rail Wednesday morning.

As it will be Halloween, there will likely be a few fans out there in costumes, but Gross urged attendees to leave their replica firearms at home. Backpacks, coolers, strollers, and other large items are also off limits.

(And also, we were just kidding about the Bud Lights. Alcohol is prohibited.)

Officials also urged everyone to keep up the good behavior in the wake of the victory and to stay out of trouble. Police consider Sunday night’s celebrations a success, as there was only one arrest.

“Boston has certainly set a new tone around celebrations,” Walsh said Monday. “Maybe it’s because we have a lot of them.”

The last time the duck boats rolled through Boston with the Sox aboard, you’ll remember, was in 2013. Back then, when players’ facial hair was all the rage, the procession was led by a duck boat outfitted with a giant beard.