Even the Red Sox love it. 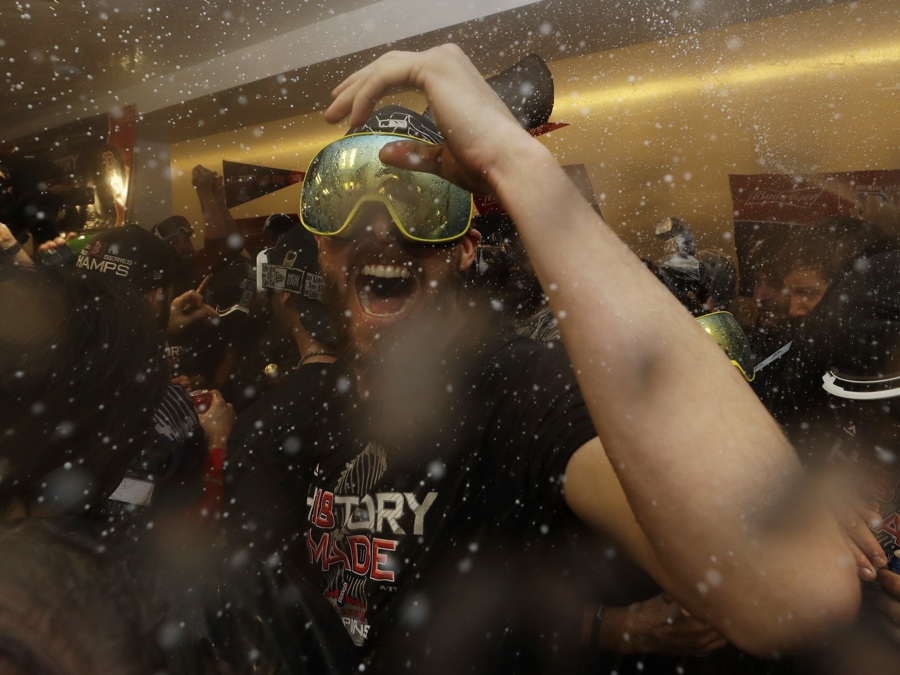 The Boston Red Sox Chris Sale celebrates in the clubhouse after Game 5 of baseball’s World Series against the Los Angeles Dodgers on Sunday, Oct. 28, 2018, in Los Angeles. The Red Sox won 5-1 to win the series 4 games to 1. Photo via AP/Elise Amendola

It’s official. The song of the World Series has arrived, and if you’re not bumping it all week to celebrate the Red Sox’ big win in LA, then you’re doing it wrong.

“Red Sox Nonstop Remix,” which comes to us from Jam’n 945 host Maverik, uses the beat from a Drake song and replaces the verses with odes to Red Sox stars:

We just won the ‘chip. I don’t know another city doin’ this. Pearce was hittin’ shots. Price was pitchin’ lights out now we at the top. We the champs doin’ damage we the Boston Red Sox

This the team that got the block hot. Super hot. Give us our respect. Look like MJ with my Benintendi catch. Stuntin’ like Joe Kelly in the specs.

And it now has the endorsement of the Red Sox themselves, who, according to a video posted by Brock Holt, were playing it on their plane back to Boston today.

Guys, stop what you’re doing. Listen to the song the Red Sox are listening to on their plane ride back to Boston… 💯 pic.twitter.com/sw6xzzGDXY

Maverik, who has written a handful of sports-related anthems when local teams make it to the championships (including back in 2013), says he stayed up all night after the Red Sox won the World Series writing and recording the song.

“I’m probably the biggest sports fan you know and I really know how to rap and, like, capture the moment,” he says. “It’s kind of like a time capsule if you’re capturing the essence of what’s going on in the moment, who’s making plays out there and stuff like that.”

It debuted on 945 this morning, and the station’s been playing it about once an hour all day. How the Sox first heard it out in LA is unclear, but Mav says he hears a friend of pitcher Joe Kelly texted it to him.

The Sox have apparently been playing it over and over ever since, and tweets featuring clips of it have been shared hundreds of times. It’s safe to say you’ll hear it on Wednesday when the duck boats roll through Boston.

This thing is a hit.

“When I saw Mookie Betts in his Instagram story singing along I was like, ‘Oh man, this is it,'” Mav says. “Mookie is one of my favorite players and I’m so glad he broke out last night so I’d have something dope to write about.”