Someone Damaged the World Series Trophy with a Thrown Beer

And someone beaned Alex Cora, too. 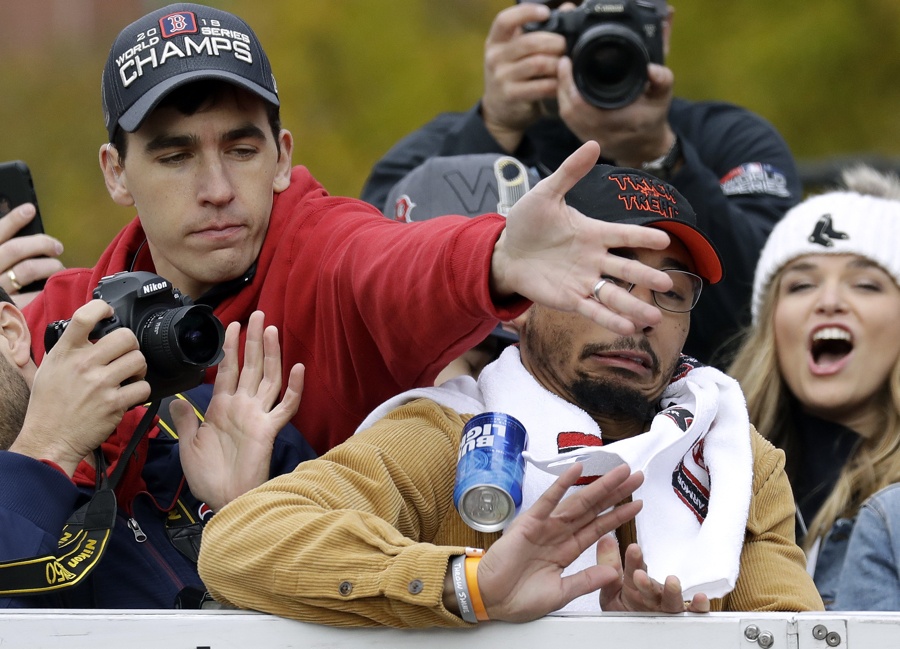 A Boston Red Sox staff member, left, tries to keep a tossed beer can from hitting Mookie Betts during a parade to celebrate the team’s World Series championship over the Los Angeles Dodgers, Wednesday, Oct. 31, 2018, in Boston. | photo via AP/Elise Amendola

Look, if you’re gonna throw beer cans at duck boat-riding athletes during a victory parade—and if history has taught us anything, you are definitely going to do that—at least learn to aim. And make sure the Sox actually want that beer before you chuck it.

One fan with a junk arm, attempting to toss a beer to the Red Sox, apparently struck the World Series trophy and damaged it. It “took a direct hit” and “got bent out of shape,” reports Chronicle‘s Anthony Everett. Photos show its wounds, and they aren’t fatal. A metal spoke or two is now bent at a weird angle and a couple flags are twisted the wrong way. It could be worse. But still.

That wasn’t the only beer-related mishap that went down today.

Another fan, identified as 19-year-old Patrick Connolly, of Sandwich, was arrested in Copley Square after police saw him “throw an unopened can of beer at one of the Duck Boats, striking an adult male party on board.” Although police don’t identify him, that man was reportedly none other than Red Sox Manager Alex Cora. He was not injured, police say.

Someone also threw an opened beer on Alex Cora and daughter. 🙄 pic.twitter.com/TbqDwFjOs1

Connolly is now due in court to face charges for underage possession of alcohol, disorderly conduct, and assault and battery by means of a dangerous weapon.

Another woman says a wayward beer can slammed into her face, apparently after someone overshot the throw to a duck boat across the street, and now she may need stitches, she tells the Boston Globe.

One #RedSox fan said she might need stitches after getting nailed in the face with a flying beer can. https://t.co/szTSCI87Et #RedSoxParade

Photos from the route also show other duck boat passengers (including a Globe photographer) near Mookie Betts had to swat incoming beers away from his head. “This definitely has got to stop,” Betts reportedly said.

Globe photographer Stan Grossfeld blocked a beer can from pelting Mookie Betts in the face during today’s #RedSoxParade. https://t.co/9YQB99xbxM pic.twitter.com/ux8BPMPmA1

Please do not hit Mookie Betts in the head, OK?

Stop throwing beers at @mookiebetts . We need him. @RedSox pic.twitter.com/f0B0T5tIxJ

Sharing swigs with our sports heroes during victory celebrations is a tradition at this point (what would a Pats duck boat tour be without Gronk chugging and spiking Bud Lights?). Public drinking is still technically off limits though, and officials had warned fans that alcohol would not be tolerated.

The mayor and other public officials also warned all of us while we celebrate not to “do damage” to the city (or, it follows, to the players). “Act like we’ve been here before,” BPD Commissioner William Gross said before the festivities.

And the thing is, we have been there before. And we’ve made countless perfectly executed beer throws in the wake of championship after championship. This year, for whatever reason, things went south. So give yourselves a round of applause, the uncoordinated among the victory parade horde. You just gave everyone who hates our guts a win. Although, I guess they could use one.