How Southie Responded to the Hateful Graffiti at Tynan Elementary

Police are still searching for whoever scrawled racist messages on the school in spray paint. 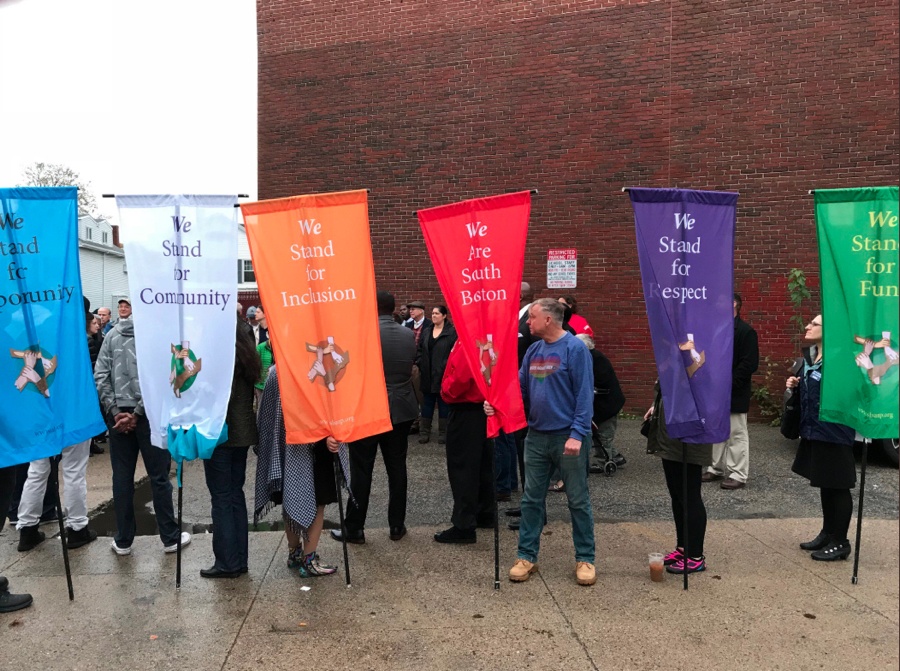 As the search continues for whoever was behind a racist graffiti incident at the Tynan Elementary School in South Boston, Southie turned out for a show of support Friday morning as students headed into class.

Holding multi-colored flags, clapping, and cheering, a large crowd was there to counter the hateful messages discovered written on the school Wednesday, which included racial slurs targeting African Americans.

An event organized on Facebook called on neighbors to do a “morning meet and greet” and let the students know they care:

Boston we have a lot of work to do! Black and brown men and women, we need to do a morning meet and greet of the kids and their families at the Tynan School this Friday! Our kids should not be filled with fear. They need to see that we stand with them.

And that’s what they did.

There was a wonderful display of unity outside the Tynan Elementary School in South Boston this morning. Thank you for everyone who display a positive message of love for our youngest students. #nohate @BostonSchools pic.twitter.com/6VoKrjrN0p

Tynan Elementary School students are welcomed off the buses with waves and applause after racist graffiti was sprayed on the school door Wednesday. #istandunited #inclusion #respect pic.twitter.com/5sVYaue2b7

Meanwhile, police are seeking the public’s help in tracking the culprit down. They believe the vandalism happened sometime between 11 p.m. Tuesday night and 5:45 a.m. Wednesday morning, when it was discovered. The Tynan school is located at 650 E. 4th Street in South Boston. Anyone with information can call 1 (800) 494-TIPS or text the word ‘TIP’ to CRIME (27463), to make an anonymous report.

“Racism and threats of this nature will not be tolerated in our schools or in the City of Boston,” Mayor Marty Walsh says in a statement. “To whoever wrote this message, you should be ashamed for spreading this message of hate where our young people go to learn. Boston is a place that is welcoming and inclusive of all.”