The Secret Life of a Boston Sports Hater

Boston is probably the greatest sports city in the world. But what if I don’t care? 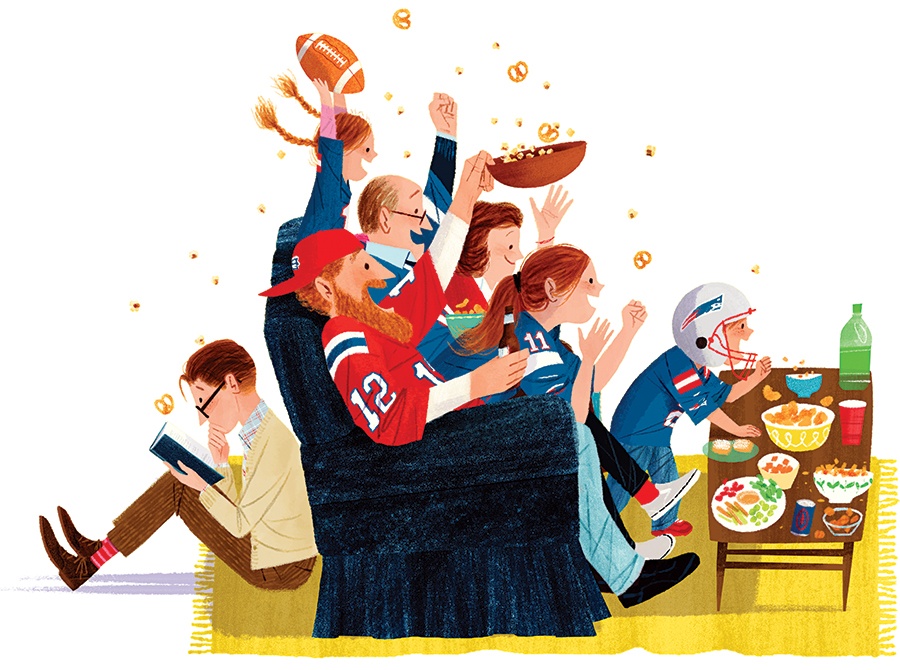 Everyone knows fall is the best time to be a New Englander. There’s the foliage, the crisp air, the spiked cider, and the renewed sense of possibility after the lazy, humid days of summer vacation. All of that, however, is secondary to the superlative annual occurrence that starts in September and runs deep into the winter. I’m referring, of course, to the window when nearly all of Boston’s sports teams are playing at the same time—i.e., when thousands of fans are thrown into a blender, topped off with Jameson, and let loose on the city. For the die-hards, it’s a time when the weekend can be consumed with a quadruple-header of Patriots, Celtics, Bruins, and Red Sox games.

It all comes to a head at Thanksgiving, a time when most Bostonians gather around a well-dressed table and try to avoid politics by talking about the only other thing on our minds in November: sports. There are exceptions, of course, the silent few who’d rather read a book or, you know, wait in line at the RMV than watch Sunday Night Football. And this is the moment they look around and wonder whether they are wildly out of place in a city that runs on medicine, learning, and innovation, but is ruled by sports.

How do I know this? Because, dear reader, I am one of them. Over the past two years, I’ve been to two measly baseball games, and I haven’t so much as stepped foot inside a sports bar or watched a Pats game all the way through. It’s a confession I don’t make lightly, because while today’s sports culture is only slightly more attractive to me than, say, joining a cult or watching nothing but car commercials for an afternoon, I’ve spent years being able to blend in at parties and all manner of social functions by passing as a fan. Sports, after all, are a bridge to talk to just about anyone here, a currency accepted by lawyers and Lyft drivers, caddies and cardiologists. Outing myself feels like setting that bridge on fire.

So why am I doing it? Because while sports can be a great way to bond with your uncle over turkey or to make nice with your wife’s boss at office holiday parties, I’ve decided that there must be more to being a Bostonian than giving your heart to a team of strangers. Right?

Before I go any further, I think it’s worth saying that I didn’t always feel this way. My older sister and I pretty much grew up swaddled in Boston sports fandom. Some of her earliest memories, she tells me, are of being propped up next to my dad while he watched Larry Bird tearing it up on the court. When I showed up a few years later, my dad almost immediately nicknamed me Rico Petrocelli—after the Red Sox’s slugging shortstop and third baseman—for reasons I still don’t entirely understand. Point being, the indoctrination was there.

It wasn’t just sitting around on Sundays watching games, either. A couple of times a year, my dad would pack the family into the car and make the long pilgrimage from Martha’s Vineyard, where we lived, to Boston to watch a game live. Though even then I preferred reading a book to watching sports, these were exciting trips, firstly, because going to the mainland was always an event, but also because I had been taught that Fenway Park and the old Boston Garden were holy ground. Fandom wasn’t so much about wins and losses—there were a lot more of the latter in those days—as about appreciating these feats of skill and strength as something close to the divine, like going to Mount Olympus and paying tribute to the gods.

A lot of this outlook had to do with the fact that the time when my folks lived in Boston before they moved to the Vineyard—the ’60s and ’70s—can only be described as a golden era of Boston sports. The Celtics, led by Bill Russell and Red Auerbach, won nine NBA championships in the 1960s, and the team won two more in the ’70s. Watching Bobby Orr skate for the Bruins was described as something close to a religious experience by my dad. And while, yes, the Red Sox were still decades away from reversing the curse and winning a few World Series trophies, they were a source of perennial hope. (The Patriots sucked, but whatever.) Given that this was back when you didn’t have to take out a second mortgage to buy tickets to a game, it was easy to be a witness and feel a part of the highs and lows.

Needless to say, this vision of the Hub as the promised land of sports left an impression. From my early years into my twenties, it pretty much defined the city for me, like it or not. My sister went to BU, and when I visited her we’d catch a hockey game or sit in the bleachers at Fenway. For a while, she lived in an apartment overlooking the ballpark’s parking lot, and we’d hang out in her tiny kitchen watching the games on a TV on top of the fridge. When there was a big play, we’d hear the crowd erupt a full three seconds before we got to see what happened on the slightly delayed broadcast. During college in Maine, I’d grab my fake ID and walk to the bar down the street to pound PBRs with my friends and yell at the Patriots, who, after a few Super Bowl–winning seasons, were blowing it again. Later, while living in Washington, DC, I’d while away afternoons sipping a pint and bullshitting over a game.

Just beneath the surface, however, bubbled a truth I didn’t dare speak: While my upbringing, my cultural DNA, had helped me learn and appreciate the language of sports, I didn’t truly relish the games. I was going through the motions, and once I hit my thirties and returned home to Boston, I realized I didn’t need to pretend anymore.

Back when I lived in DC, I knew a Capitol Hill reporter who used to track all the teams his sources followed and would check the scores first thing when he woke up, so he’d have something to talk about when he saw them in the hallway. He didn’t care a lick about sports, but it was a good strategy—a way to build immediate rapport.

On the flip side, admitting my ambivalence toward baseball, football, and the like in Boston, where fandom is so intense, almost seems like an act of aggression. At parties and events all over the city, sports is often the safest subject to broach when approaching a thirtysomething dude, which means I’ve been asked, “Did you see the game last night?” more times than I can count. The conversation gets pretty awkward when you simply say no.

That said, I’ve found there are upsides to my disinterest in sports. Unsurprisingly, there are plenty of people like me in this town—a grumbling majority, even—who cringe at the hollering dudes in Sox hats at the bar and ruin Thanksgiving by bringing up politics when everyone is perfectly happy to debate whether Tom Brady will still be playing at 45. Freeing myself from the poorly performed charade of fandom has opened my eyes to those less-dominant subcultures that also thrive here.

During this past Super Bowl, for instance, I ate dinner with friends at Myers + Chang, snagging a last-minute prime-time reservation. While the rest of the city suffered losing to…someone (I don’t remember who, to be quite honest), we slurped dan dan noodles and sipped Hitachinos surrounded by a crowd that seemed to hum with the self-satisfaction of not being beholden to the obsession that gripped our fellow citizens.

The truth is, fandom—and all of the endless arguing and gossip-trading that comes with it—exists in many forms. When I asked an old friend what he gets from sports, he pointed out that the draw is pretty much the same as what I get from political Twitter—which, yes, is a sad cultural junk food all its own. In other words, in a city so rich in nerdery, there are plenty of other communities to join, whether you’re into rock-climbing, dining out, or simply avoiding sports bars at any cost.

Will I ever be a fan again? It’s hard to say. I have fond memories of watching the Sox finally reverse the curse. But odd as this may sound, I think one of the worst things that happened to Boston sports teams in my lifetime was that they started to win. While sports culture has always been in the water here, it went down a little easier before we became the City of Champions. When you’re rooting for the underdog, the boisterousness that makes fandom fun doesn’t have that unseemly braggadocio that comes from winning all of the time. Rooting for the Pats or the Sox now feels more like cheering for the rich-kid teams that were the villains in every ’80s sports movie I grew up on.

That means, for the moment, at least, I’ll take my Sunday afternoons and see where they lead me. There’s a whole city out there, and I’m excited to give it a sporting chance.