Election Day 2018 Has Arrived in Massachusetts

Three ballot questions, a Senate race, and a long-shot challenge to Charlie Baker take center stage in the midterms. 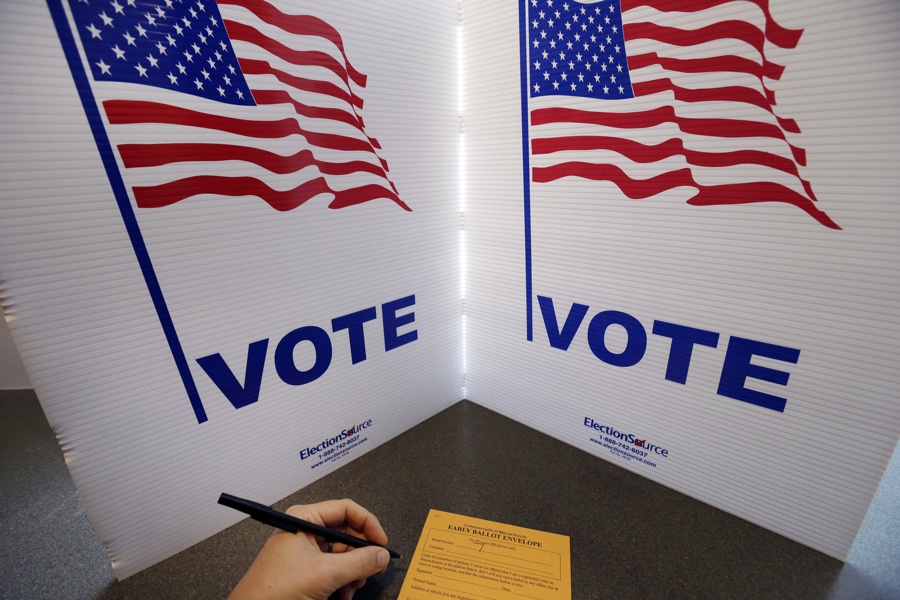 An early ballot envelope is about to be filled out at town hall, Monday, Oct. 24, 2016, in North Andover, Mass. For the first time in Massachusetts, voters can cast their ballots for president before Election Day. Early voting begins Monday and will continue through Nov. 4. (AP Photo/Elise Amendola)

Nationally, it’s anyone’s guess what is about to happen. Will the Democrats take over the House or, by some twist of fate, the Senate? Anyone who thinks they’ve got a rock solid forecast for either of those things is lying to you and perhaps to themselves.

Here in the great state of Massachusetts, it’s shaping up to be a high-participation midterm. More than half of all the registered voters in the state are expected to turn out to the polls, including those who vote today and the 584,000 who voted early, according to Secretary of State Bill Galvin’s office. That’s 2.4 million voters out of about 4.6 million registered.

As for election hacking, which is on a lot of people’s minds these days and it seems for good reason, Galvin says there’s nothing to worry about. “We’ve had, I would say, minor efforts to penetrate but none of them have been successful,” he said, according to the State House News Service.

As of noon, turnout in Boston was about 22 percent, according to the city’s election department. Polls close at 8 p.m.

If the midterms nationwide are anyone’s guess, locally things are a little more clear. Barring a major upset, Democrat Elizabeth Warren will soon be reinstated as your senator and Republican Charlie Baker will remain governor, after maintaining a solid lead in the polls over Democratic challenger Jay Gonzalez. Gonzalez, who has hammered Baker on his record on the MBTA and his backing of Trump supporters on the Republican ticket, maintains he has a better shot than the polls have given him credit for. “I think we’re going to surprise a lot of people,” he has said. We’ll see.

Suffolk County, meanwhile, will likely have a new District Attorney in Rachael Rollins, who ran on a platform of criminal justice reform. She’s running against former defense attorney Michael Maloney, an independent.

Boston City Councilor Ayanna Pressley, who is not facing a Republican challenger, will officially be elected to the U.S. Senate, the first black woman Massachusetts has ever sent to Congress.

Meanwhile, all eyes are on the ballot questions.

Question 1, which would shake up the way hospitals are staffed in the state, had been seen as a toss-up early on, but the no side has gained a sizable lead of 58-31 in the latest polling and appears to have momentum on its side. That’s despite the near universal endorsement of the union-backed ballot measure from top Democrats in the state.

Question 3, the nation’s first statewide referendum on a transgender protections law, appears poised to keep the law in place and has maintained a commanding lead in the polls. The debate over the ballot question got a boost from a must-see 11th hour video from a local ad firm that features a foul-mouthed “Masshole” opining on preserving the liberties of his trans brothers and sisters and urging viewers to vote “yes” on 3 (although, the state’s largest pro-trans rights group would prefer you focused on the fact that the law is supported by both the law enforcement and sexual violence prevention communities).

Here’s what our #YesOn3 volunteer teams have accomplished in the last 48 hours:

Let’s keep it up! Sign up here to get out the vote: https://t.co/5ecIR6PbIB pic.twitter.com/KREHgKTPpi

Question 2, an almost entirely symbolic measure in opposition to dark money in politics, will pass by a landslide. Good for Question 2.

Will the flying piece of interstellar junk that a Harvard researcher says may or may not be a piece of an alien spacecraft play a role in the midterms? It remains to be seen.

This afternoon, look for an update from the Election Protection coalition at around 3 p.m. on any potential problems at the polls, be it voter intimidation or excessively long lines. A voter hotline to report problems can be reached at 1-866-OUR-VOTE, or, for Spanish speakers, 1-888-VE-Y-VOTA.

Please take care of yourselves tonight, avoid staring obsessively at The Needle, and expect that maybe this giant quasi-referendum on Donald Trump won’t wrap up by bedtime.

See you on the other side.