The latest on the top races as results come in. 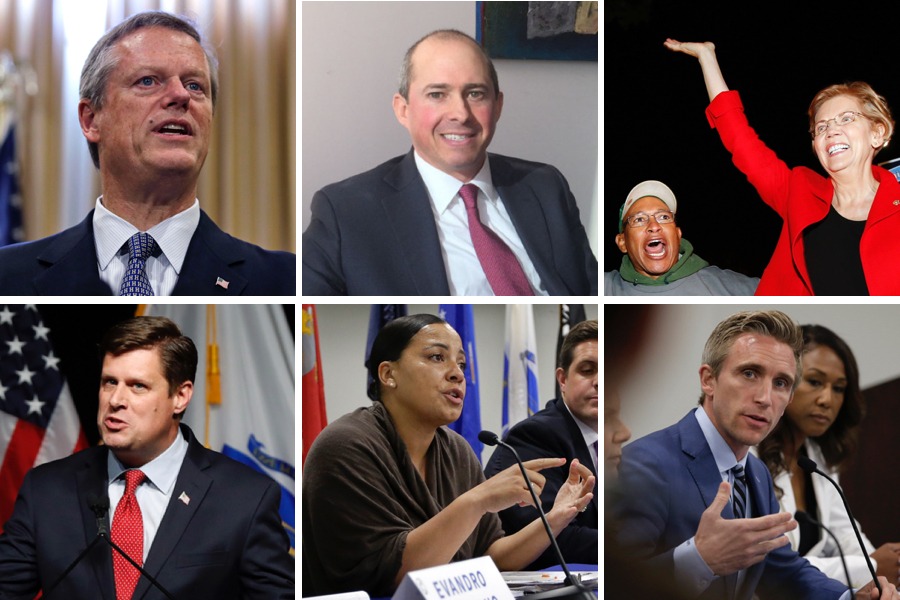 Results are pouring in from the 2018 midterm election in Massachusetts, where voters are weighing in on races for governor, Senate, District Attorney, as well as three ballot questions.

The Associated Press and several other outlets have called the races for both Sen. Elizabeth Warren, who faced a challenge from Republican Geoff Diehl, and for Republican Gov. Charlie Baker, who faced Democrat Jay Gonzalez.

Boston City Councilor Ayanna Pressley will also ascend to her role as the first-ever black woman Massachusetts has sent to Congress. She beat U.S. Rep. Michael Capuano in the Democratic primary earlier this year and did not face a Republican in the election. She’ll join a slate of Democrats who did not face midterm opponents and will coast to Washington tonight: Reps. Richard Neal, Joe Kennedy III, and Stephen Lynch.

Voters also voted down ballot question 1, which would have mandated nurse staffing ratio levels, despite the endorsements of most of the state’s Democratic elected officials.

And in a move backing the state’s landmark transgender protections law, voters overwhelmingly voted in favor of Question 3, the nation’s first statewide referendum on trans rights.

VICTORY: #Massachusetts votes #YesOn3 to uphold dignity and respect for our #transgender neighbors! Together, we’ve secured the first-ever statewide victory for transgender protections at the ballot box. pic.twitter.com/wPTwaWuGQj

Secretary of State William Galvin has won re-election to his seventh term, pulling ahead of Republican Anthony Amore 71 percent to 25 percent, with 27 percent of districts reporting as of 10 p.m. Galvin survived a feisty primary challenge from City Councilor Josh Zakim.

Attorney General Maura Healey has pulled ahead as well, besting Republican James McMahon 69 percent to 30 percent, per results with 29 percent of the results in.

Thank you Massachusetts! I’ve loved being your Attorney General – and I’m so lucky to get to do this job. I’m so happy I get to be your AG for FOUR MORE YEARS. pic.twitter.com/1oNk1KODXi

Democrat Lori Trahan has also won the 3rd District seat vacated by Rep. Niki Tsongas, taking 60 percent of the vote to Republican Rick Green’s 36 percent and the 4.2 percent brought in by independent Michael Mullen, according to results with 15 percent reporting. Trahan narrowly beat former Marty Walsh aide Dan Koh in a nail-biter of a race that went to a recount earlier this year.

Out in Utah, former Gov. Mitt Romney cruised to victory as well. He’s headed for the U.S. Senate, with a 17 point lead over his Democratic opponent.

We will update as more results come in.