She brushed off a challenge from Geoff Diehl. Now what? 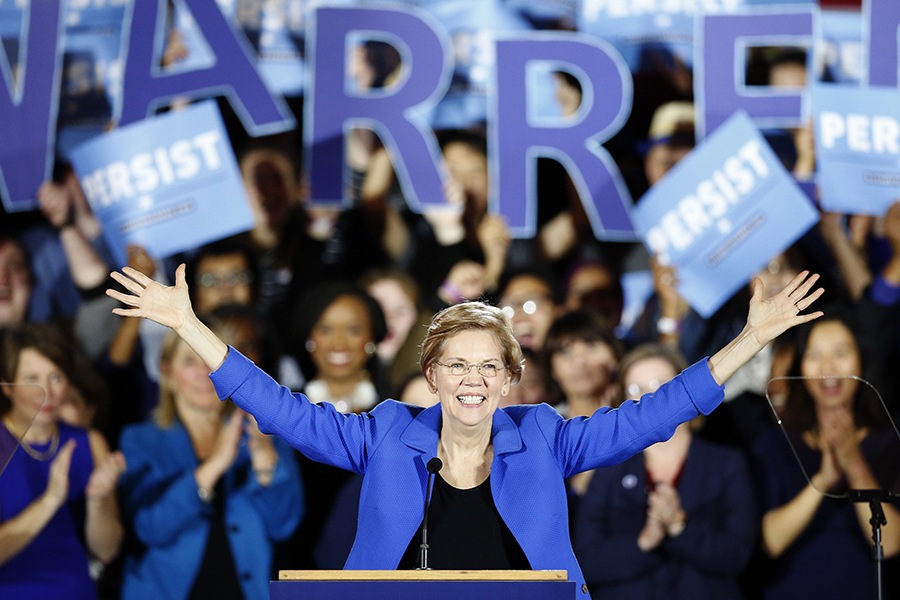 Brushing aside a challenge from Republican Geoff Diehl, a proxy for Donald Trump on what could be a path to a presidential showdown in 2020, Elizabeth Warren has won re-election in Massachusetts.

Warren had about 61 percent of the vote to Diehl’s 36 percent. Shiva Ayyadurai, the independent, pulled in about 3.4 percent of the vote. The vote tees up another term for the former Harvard professor, who took on the role after routing Republican Scott Brown in 2012.

She’s celebrating at the Fairmont Copley Plaza in Boston.

“Thank you, Massachusetts!” she said in a statement via her campaign. “Six years ago, I promised to go to Washington to fight for you every single day. Tonight, let’s send the powerful interests a message: We’re just getting started.”

Let the party begin at Fairmont Copley. Band playing on stage. Little cheer when it flashed that @SenWarren is declared winner. pic.twitter.com/fKIo4EnOyH

.@elizabethforma has been the fighter we need in the Senate. Thrilled about her reelection tonight! Congratulations, Senator! #mapoli #bospoli https://t.co/0OGOKz8td6

In a speech Tuesday night, Warren celebrated both her win and the Democrats’ victory in flipping the U.S. House of Representatives, calling it a chance to push back on the agenda of President Trump.

“Tonight I make you this promise,” she added, “we are just getting started.”

Addressing his supporters in a concession speech, Diehl said he had called to congratulate Warren.

“Unfortunately we came up short on this final goal,” he said, “but I am proud of the honest and principled campaign that we ran.”

The prospect of unseating Elizabeth Warren was always pretty distant, as she has maintained a sizable advantage in the polls over Diehl, leading him 54-32 in the latest survey from WBUR/MassINC.

In Massachusetts, which opposes the president more than any other state, Diehl had been linked by Warren and others to Trump, for whom he served as Massachusetts’ campaign co-chair. Trump, who probably saw the writing on the wall, did not campaign for or even endorse Diehl, as he has done for other candidates across the country.

There may be more than another six years in the Senate at stake during this race, which had been seen as a chance to wound Warren ahead of a possible presidential campaign and get the anti-Warren machine moving way ahead of 2020.

The clearest sign yet that she’s gearing up to take on Trump came during a campaign stop and town hall in Holyoke, where she announced she would take a “hard look at running for president” after the midterms.

Warren and her team also poured resources into races outside Massachusetts, moves designed to help Democrats in tight races, and would also help her get an edge later on.

“I feel the urgency of the moment nationally,” Warren told the Washington Post, explaining this. “It’s two parts: It’s holding Donald Trump accountable for what he does. It’s also trying to push this country toward working better for hard-working families.”

Diehl’s campaign frequently pointed out the fact that she is probably going to run, beating the drum in ads and from the debate floor. “She doesn’t care about your house, she cares about the White House,” he said.

If she does give it a shot, it’s still too soon to say how it might go. At home, at least, there doesn’t appear to be overwhelming enthusiasm about it. A Suffolk University/Boston Globe poll from September found 58 percent of voters here think she should sit out the 2020 race. In national polls, other prominent names have ranked more highly than she does, including former Vice President Joe Biden, Vermont Sen. Bernie Sanders, and California Sen. Kamala Harris. She could also have some competition from former Gov. Deval Patrick, who is said to have been encouraged to run by allies of Barak Obama and has publicly chewed over the idea. John Kerry also appears on several 2020 shortlists, and hasn’t really ruled it out.

If her deep-pocketed opponents have some really good dirt on Warren, it seems like they’re keeping it close to the chest. Besides a mini-scandal aired in the Boston Herald over tax breaks she and her husband got for donating clothes worth an unlikely sounding $50,000 (she later revised that number), there was nothing new unearthed by this campaign season that could pose novel problems for her in a future campaign.

That is, unless you count her DNA.

In what may well be her first major pre-2020 misstep, Warren chose to respond to Trump’s “Pocahontas” insults by releasing the results of a test showing she does in fact have a Native American ancestor, several generations removed. It didn’t quiet her critics (“Who cares?” said Trump, who has continued to use his abrasive nickname for Warren), and it opened her up to a new line of attack, only this time with a figure that is ready-made for mocking her: 1/1,024, the researcher’s low-end estimate for the amount of Native American blood in her veins. It’s unclear which voters if any might be swayed by the release of the results, and the whole spectacle even earned Warren a rebuke from the Cherokee Nation.

Warren did, however get to hammer Trump on the promise he made at a rally to pay her $1 million if she took a DNA test. The president is now denying ever making such an offer.

Diehl for his part tried to wield the heritage issue during his campaign, regardless of the test results. “I don’t care what your Native American heritage is or isn’t,” Diehl said at their first debate. The fact that she was ever listed as such in a registry, he said, is “inappropriate” and was “taking a minority hire away from somebody else.” This won’t be the last she hears about this.

Warren had also faced off with Ayyadurai, an MIT alum and entrepreneur who claims to have invented email as a teenager. After leaving the Republican primary to run as an independent, he led an unconventional, vicious, meme-fueled campaign that derided Warren as a “fake Indian” and sought unsuccessfully to be treated as a viable candidate and included in debates.

So Warren will head back to Washington. At least, for now.