In Other News, Harvard Says Interstellar Object Might Be Alien Spacecraft

'Oumuamua could also be "a probe sent intentionally to Earth vicinity by an alien civilization." 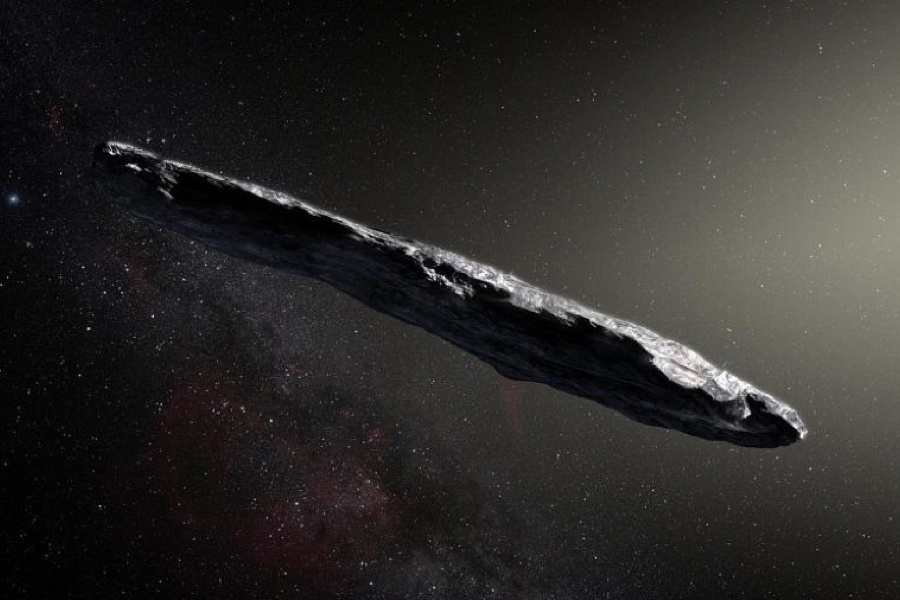 An elongated piece of junk that came hurtling into our solar system from far far away last year may have just been a blob of rock, sailing through vast, cold, emptiness past our doorstep before continuing into the vacuum of space. But where’s the fun in that?

Harvard researchers have dared to think bigger. According to Abraham Loeb and Shmuel Bialy at the Harvard Smithsonian Center for Astrophysics, the object may in fact be a hunk of alien technology.

Dubbed ‘Oumuamua after it was discovered on a Hawaiian telescope (it translates to “a messenger that reaches out from the distant past” in Hawaiian), the rock had some curious properties when it was seen flying through our area in October of 2017. Unusually thin, it accelerated at an atypical rate, and did not show a “tail” the way comets traditionally do, and is the first ever object observed that is believed to be of interstellar origins.

More boring explanations abound, but there are other possibilities, which the researchers probe with a scientist’s eye for data in a recently released report. Including an “artificial origin.”

They speculate that the object could have been a device called a “lightsail,” powered by solar radiation, “floating in interstellar space as a debris from an advanced technological equipment.” The paper notes that similar technology has been proposed as a way of sending a spacecraft from Earth to neighboring stars, including via the Starshot Initiative.

“The lightsail technology might be abundantly used for transportation of cargos between planets,” it continues, “or between stars.”

Or maybe, they’re watching us. “Alternatively, a more exotic scenario is that ‘Oumuamua may be a fully operational probe sent intentionally to Earth vicinity by an alien civilization,” the researchers wrote.

It’s unfortunately too late to get a closer look, as ‘Oumuamua is long gone at this point and can no longer be examined with telescopes. But the researchers urged other scientists to keep closer watch next time and look for signs of intelligent life.

Will this have any impact on the midterms? Not everything has to be about the damn midterms, OK? But ultimately who’s to say.

Update: The The Hawaiian astronomer who discovered Oumuamua has doubts about Harvard researchers’ theory that it might be alien technology. The scientist, Robert Weryk, tells CBC it’s all just “wild speculation” and “not true based on the data we obtained.”

But…  maybe he’s wrong? For the time being, I choose to still believe. The truth, as they say, is out there.

I know there’s a lot going on right now but… excuse me https://t.co/SicgVqmuzv

There was a joke made at a pre-election meeting on Friday that the one outcome we hadn’t prewritten was “aliens descend on the Earth,” and this is why we don’t make jokes https://t.co/vQCV0JxWFX

who wants to smoke the giant space blunt https://t.co/bSj824DIsb