They briefly clashed with left-wing activists at an anarchist book fair held at Boston University. 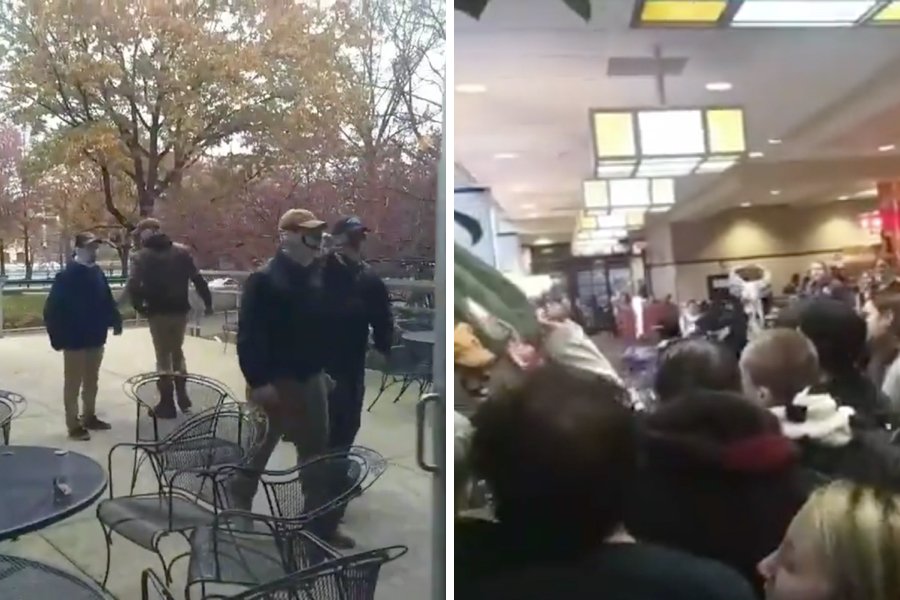 Wearing bandanas over their faces and baseball caps on their heads, a half-dozen men barged into an event at Boston University on Sunday, chanting the white nationalist battle cry “blood and soil.”

Video from the scene shows the men briefly confronted several dozen left-wing activists gathered inside BU’s George Sherman Union building, before a crowd shouting “Nazis out!” shooed them away. The disruption was over in a few minutes, and the men appear to have left the campus without incident.

The clash came on the last day of the Boston Anarchist Bookfair, a two-day event organized by local anti-fascist groups and hosted by BU’s Center for Gender, Sexuality & Activism. Attendees were invited to peruse leftist literature and attend workshops on topics like community organizing and self-defense.

The protesters were wearing bandanas with insignia from Patriot Front, a Texas-based organization that the Anti-Defamation League has labeled a white supremacist and anti-Semitic hate group. You might remember hearing the phrase “blood and soil” shouted by torch-carrying demonstrators at last year’s deadly white supremacist rally in Charlottesville. A Twitter account for the group also shared a video of the event on Monday and said its members had “confronted anti-American agitators.”

Last year, several men with alleged ties to Patriot Front showed up to harass a similar event in Houston.

This was only the latest clash between far-right and antifascist groups in major cities—and some of those clashes have gotten violent. The situation at BU fizzled, though, and no punches were thrown. Instead, the video shows, the fascism-aligned protesters quickly ran out of steam and stopped chanting, possibly noticing that they were outnumbered inside the student center. Some in the crowd can even be heard laughing as the men stood in an awkward silence. Then, confronted with jeers and a mass “Nazis out” chant, they left.

Things could have gone very differently. One attendee said the bandana-clad men were antagonizing people inside, and mentioning the rhetoric anti-fascist groups use on social media.

“They were saying, ‘We’re not on Twitter anymore. You want to punch a Nazi? Here I am,'” says Mike, a “bookfair” attendee who shot video at the scene. “They were trying to start a fight.”

Mike, who asked me not to use his last name but identified as a member of the local branch of the Democratic Socialists of America, says Boston-area left-wing groups have come to expect that extremists on the right will try to tangle with them in public—usually with cameras, so they can film the mayhem if fights break out.

“Usually it’s more like the alt-lite as opposed to the alt-right. In this case it was pretty blatantly something a little bit more hostile and ominous,” he says, adding, “We’re not afraid of them, we’ll confront them, but we’re not gonna start shit with them physically because that’s what they want.”

So the fascists showed up at the Anarchist Bookfair…

The book fair’s organizers do not appear to have hired a security detail for the event (remember: anarchists). And even as a group of masked men descended on the college campus, no one called for help. “No police were involved,” BU Police Department spokesman Colin Riley tells me. “Apparently it was over and done with in short order.”