Massachusetts’ Pot Industry Is off to a $2.2 Million Start

A report on the first five days of legal marijuana sales is in. 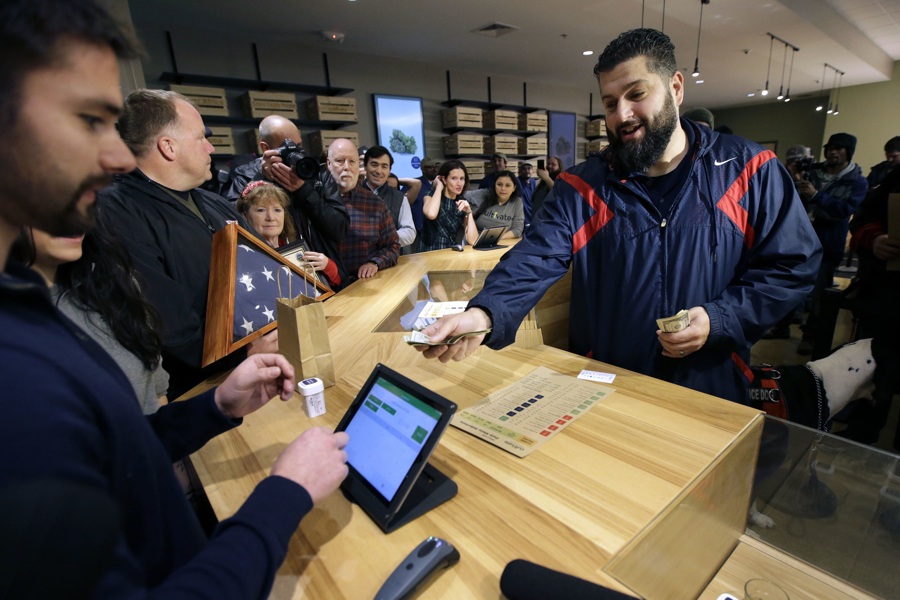 Stephen Mandile, right, an Iraq War veteran from Uxbridge, Mass., is the first to purchase recreational marijuana at the Cultivate dispensary in Leicester | Photo via AP/Steven Senne

Turns out this state was really excited to buy legal weed.

Massachusetts marijuana sales came in at about $2.2 million for the first five days recreational marijuana shops were allowed to begin selling their buds, tinctures, THC-infused candies and other products. According to a report released by the state’s Cannabis Control Commission Tuesday, there were 56,000 products sold in that first week, and the average amount customers spent was $39.33, on an average of 3.4 items per person (for example, a trio of purchases might be a couple grams of buds, a pack of gummies, and a vape cartridge).

The biggest day of sales was on November 23, Black Friday, when marijuana customers spent a total of $480,000.

Demand has been strong at the two stores, Cultivate in Leicester and NETA in Northampton, where lines have continued to snake out the door and surges in car traffic have continued to irk neighbors. Following a community meeting, Cultivate now says it’s implementing new traffic measures, adding 70 new parking spots and hiring an additional police officer to work detail, the Boston Business Journal reports.

All of that money spent adds up to a whole lot of tax revenue for the state, which will take in $376,995 in its cut from the sales. Northampton and Leicester will also collect $66,528 in local taxes between the two communities. The CCC did not provide numbers on how much each store sold individually.

It’s also pretty clear that being first out of the gate has been pretty good for both those companies’ bottom lines. Other dispensaries are expected to open their doors soon, most likely in Salem, Easthampton, and Wareham. It’ll still be a while before one opens in Boston. Mayor Marty Walsh says he expects the first to arrive early next year.