The GOAT responded to a super-fan's dedication on Instagram. 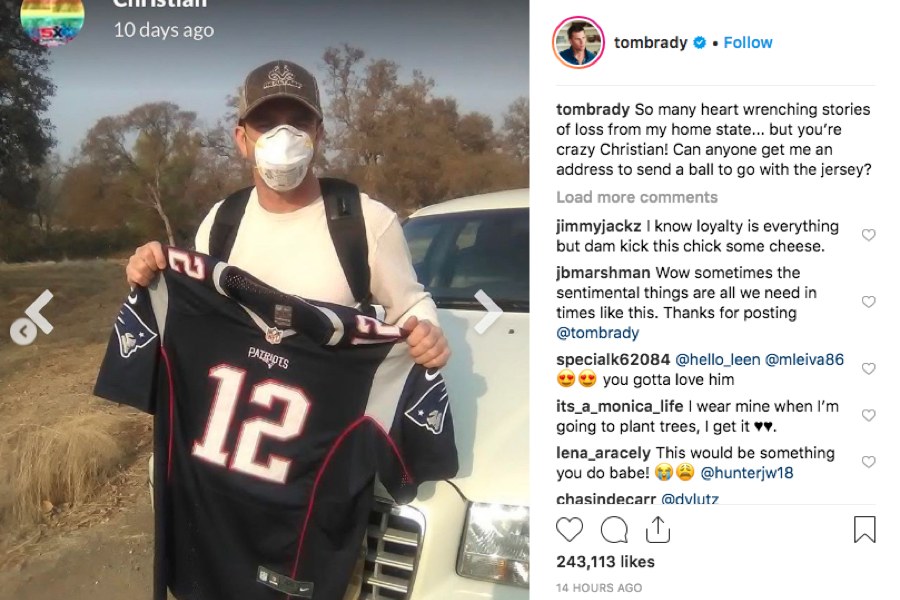 A California resident has caught the eye of the GOAT himself after sharing a photo of himself holding up what is apparently a Brady game jersey, which he says in an Instagram post is “the only thing I grabbed out of my house” when wildfires ripped through Paradise, California. The Insta user, identified by the name Christian, also shared a photo of a house in shambles. “I lost everything,” he wrote, adding, “GO PATRIOTS.”

Brady shared screenshots of Christian’s posts via his own account. “So many heart wrenching stories of loss from my home state,” wrote Brady, who is from San Mateo, near San Francisco, “but you’re crazy Christian!”

So many heart wrenching stories of loss from my home state… but you’re crazy Christian! Can anyone get me an address to send a ball to go with the jersey?

He also asked his followers for help tracking the fan down so he could send him “a ball to go with the jersey,” and later wrote that he had been given an address for the fan.

He’s not the only Californian to prioritize their love of TB12 even as their community went up in flames. Talk show host Jimmy Kimmel earlier this month poked fun at the husband of a producer on his show, who, after they were given an order to evacuate and limited time to collect their things, apparently grabbed a stuffed Tom Brady doll.

A producer from the Jimmy Kimmel Show had to evacuate their house in the middle of the night because of the California wildfires.

They had a couple minutes to grab anything important.

The only thing the producer’s husband grabbed was his Tom Brady doll.pic.twitter.com/9OJ1A8Ni6F