A man who jumped into the water Wednesday morning was rescued after clinging to the artwork. 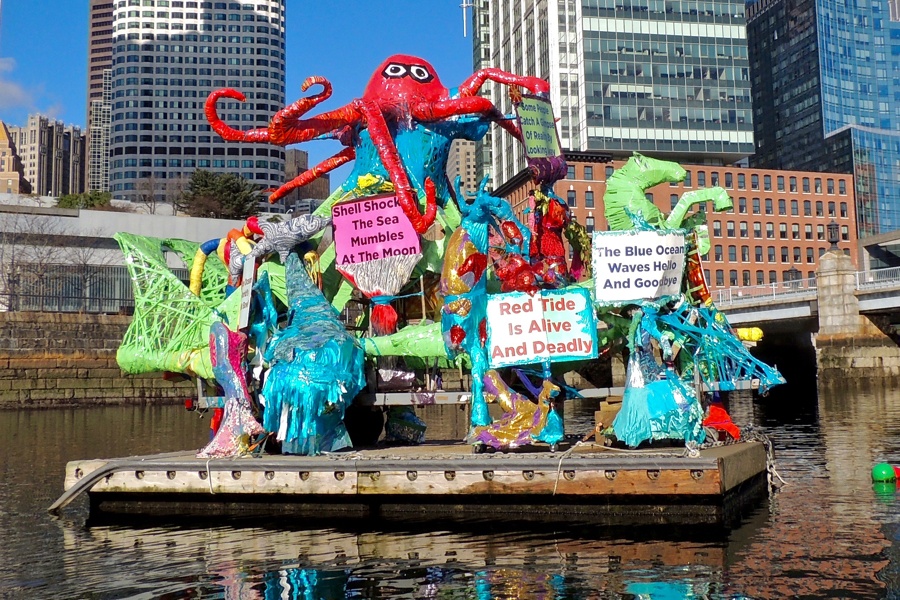 The artist behind a piece of floating artwork in the Fort Point Channel is awestruck today after his ocean-themed art project may have saved the life of a man who jumped into the water early Wednesday morning.

“Every day is an adventure,” says Jerry Beck, of the Revolving Museum in Fitchburg. “I love this public art stuff. You just never know how everything is gonna happen. From sinking, to coming back to life, to catching criminals and saving lives at the same time. I mean, it’s all fantastic.”

Police say a man, identified as 29-year-old William Thoresen, of Shirley, jumped into the Channel at around 3 a.m. Wednesday morning after he allegedly broke into a building on South Street, then stole a taxi cab at South Station, injuring another taxi driver in the process, and drove the car to the nearby Summer Street Bridge before leaping into the chilly water below. Police later found Thoresen had taken refuge on the artwork, a barge covered in sculptures of colorful sea creatures called the Create Coral Reef II.

Man allegedly steals cab from South Station, crashes about a block away on Summer St. bridge, then jumps into Fort Point Channel. Gets himself out on floating dock, which is an artistic coral reef. Quite a morning. #WCVB pic.twitter.com/hb1RGoBJHP

The man was taken to a nearby hospital with undisclosed injuries. He faces a number of charges, including carjacking, assault and battery, and breaking and entering. Police have not offered an explanation for his alleged bizarre behavior.

We’ll never know if the floating artwork saved him from drowning, but anyone plunging into the freezing cold waters would not have had many options for things to grab onto in the channel, a long, wide waterway not designed for swimming, with tall stone walls on either side.

It almost wasn’t there. An earlier version of the artistic coral reef, built in the hull of a sailboat, was removed from the channel in October after high winds caused it to capsize. After towing the damaged artwork back to his studio in Fitchburg and raising some $4,000 from friends and supporters for materials, Beck and his crew constructed a sturdier version on top of a barge, and had only set it up in Boston this past Friday.

Beck, who says he is recovering from surgery for a knee injury he sustained while fixing up the artwork, says this is just one more example of public art impacting the world in unexpected ways and, weirdly enough, another way to reach a wider audience.

“The ultimate goal is that this coral reef brings attention to the importance of the water in terms of saving lives and in terms of changing policies,” he tells me. “It’s just an incredible thing that somehow, who knows, maybe he saw that paradise out there and thought he could be saved. We don’t know what his story is, but the fact is, even though this happened, it certainly helps us bring attention to this project. I feel like we’ve educated so many people about coral reefs.”

It’s unclear how long Create Coral Reef II will remain in the water. Beck says he’s asked the Fort Point Arts Community, which commissioned the piece, to be allowed to keep it there through the spring.