Rates are rising, recession is looming, and markets all over the country are slowing down. But does any of that matter here? 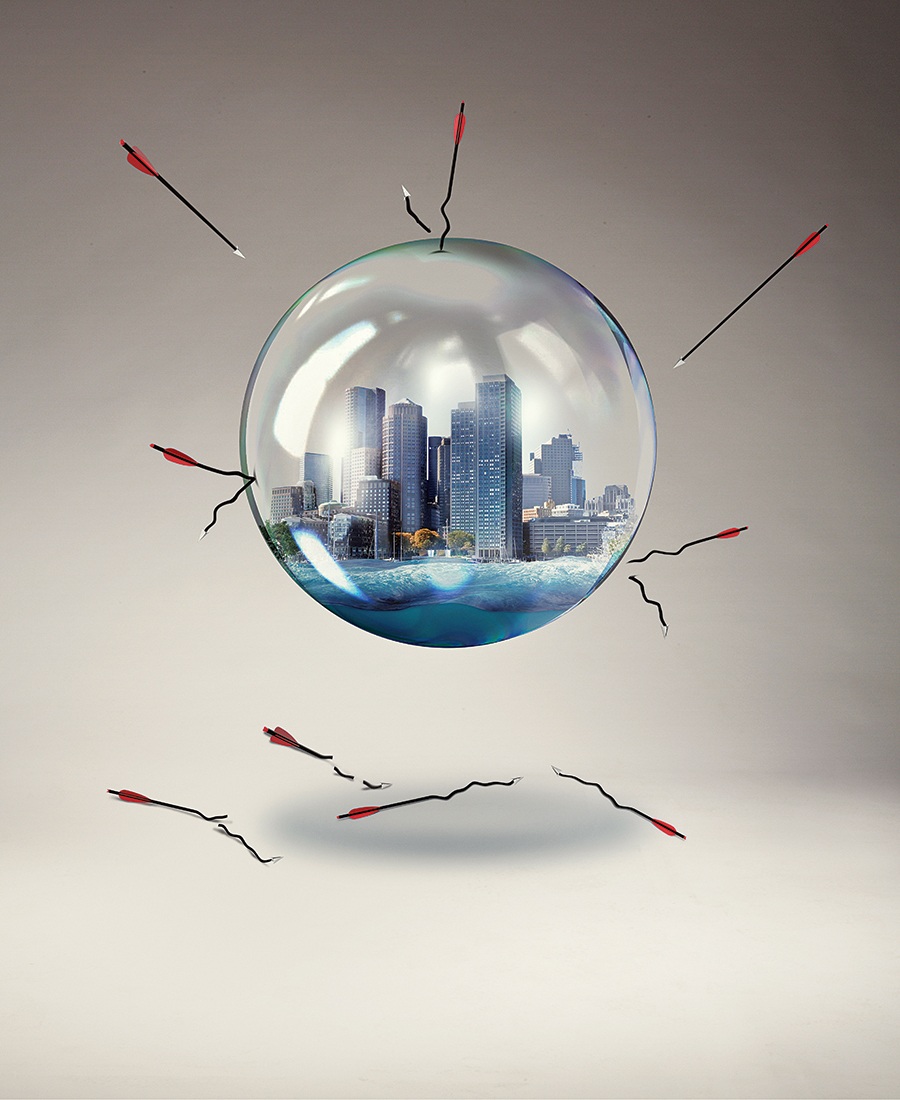 If you’ve so much as thought about buying property in Boston lately, you’ve probably noticed that the upward march of real estate prices seems less like a trend than a Newtonian principle—what goes up must come down, unless it’s the value of a deed in Suffolk County, in which case it shall continue tracing its skyward arc. It’s an equation that even your idiot brother-in-law couldn’t screw up, if he happened to have a down payment on hand. Except that lately, things have started to feel a little shakier: Nationally, the housing market has begun losing steam; the Fed is hiking rates after a decade of easy money; and murmurs that we’re overdue for a recession have grown louder and louder. So with Procter & Gamble deciding to put 6.5 of its 40 acres in Fort Point on the market earlier this fall for a windfall predicted at more than $200 million, it’s hard not to wonder: Do they know something we don’t? Is the Boston bubble about to pop?

It’s not as crazy at it sounds. In the housing market, for instance, there’s been a recent uptick in the number of properties for sale, and they’ve been staying on the market longer. Prices, while still going up, are rising more slowly, and the Republican tax bill, which capped the mortgage interest deduction at $750,000, is poised to put the squeeze on expensive markets like Boston and stall prices. (Moody’s Analytics predicts changes from the tax bill could push average prices here down by more than 6 percent compared to what they would have been without it.) Not to mention that Boston property values have only recently recovered from the Great Recession. Taken together, it could all point to a party that’s about to end.

But not necessarily. According to Felipe Chacón, an economist at Trulia, the slowdown—with price cuts in the exurbs and extra inventory on the market—is still more like comparing good and better than good and bad, and he argues that we’re a long way from bubble territory. For instance, we haven’t seen the kind of building boom that flooded the market ahead of the 2006 crash. (In fact, building can’t keep up with demand right now, as you might have heard.) So, he says, a little cooling isn’t a bad thing. “Broadly speaking, we expect to not see the same home-value appreciation that we’ve seen in the past five years,” Chacón says, but he notes that the market is “cooling off in a healthy fashion” that could be a boon for first-time buyers. Even if there were a sudden economic downturn, he says, neighborhoods all over Boston, Cambridge, and Somerville—the ones where values have been rocketing up at 12 percent per year—are virtually recession proof.

What makes Boston so special? According to PwC partner and business development leader Mitch Roschelle, our mix of universities, tech, medicine, and finance makes us particularly resilient. “I’m not shy about saying that things feel bubbly,” Roschelle tells me, “but Boston feels like a robust economy.” Our universities, he says, not only create a steady demand for housing, but a pipeline of talent that makes the city a particularly enticing destination for companies. In fact, PwC named Boston the seventh-best city in America in which to invest in real estate—comfortably ahead of techy rivals Seattle (16) and San Francisco (41)—in part because of our diverse economy, which can insulate us from national downturns. James Elcock, president and managing partner at Colliers International Boston, is particularly bullish on this point, saying, “I wouldn’t say that we’re bulletproof, but if anything happens to Boston, it’s going to be a dimmer switch” rather than a crash.

Does that mean the real estate market is untouchable here, destined to climb ever upward—sometimes faster, sometimes slower, but up, up, up? I mean, let’s not go wild. But, if you’re sitting on the edge of your seat, waiting to hear that pop!, well, we’re likely still a long way from bust.