Why Is a Video of Alexandria Ocasio-Cortez Dancing at BU Going Viral?

A random critic has exposed her for being... cool and fun as a Boston University undergrad. 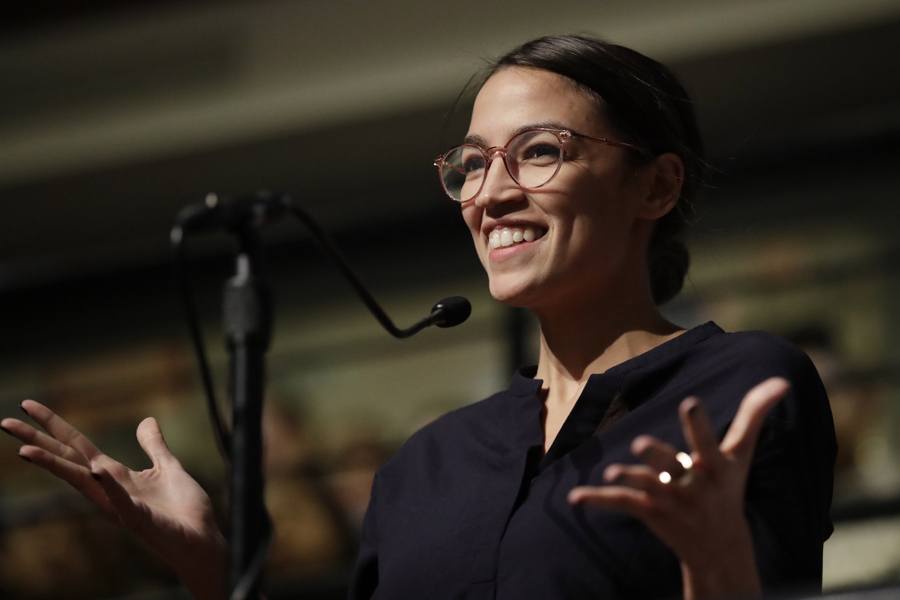 Alexandria Ocasio-Cortez—the freshman Congresswoman from New York, Boston University alum, and ally of Ayanna Pressley—really bugs a lot of the worst people online. There’s just something about the combination of her outspokenness and lefty politics, her relative youth, and her bartender-to-D.C. backstory that breaks a certain kind of brain on the internet.

Back in November, there was the Washington Examiner writer who posted a creepy photo of the Congresswoman-elect from behind, in an effort to, I guess, criticize her for having a nice jacket. The backlash was severe, and the tweet was so bad it became a meme. There has also been some (also creepy) dissection of her high school yearbook photos, as well as an ongoing obsession with the fact that she’s an advocate for lower-income people and yet grew up in a house.

Knowing about the specific hang-ups of this particular hive mind is helpful when trying to parse what ticked off this one random Twitter guy, who on Thursday shared a video of a much younger Ocasio-Cortez dancing to some music, and invited us to shame her for it. The account shared 30 seconds of footage of Ocasio-Cortez busting a move on a roof, which the user said incorrectly was taken when she was a high schooler, and called her a “clueless nitwit.” A few hours later, the Congresswoman was trending, and not because she was being sworn in today, but because of this:

Here is America’s favorite commie know-it-all acting like the clueless nitwit she is…
…High School video of “Sandy” Ocasio-Cortezpic.twitter.com/s723Vga9zF

The footage was not actually from her high school days, but in fact came from her time as an undergrad at Boston University, where she got a degree in economics and international relations in 2011. In the original version, posted to YouTube in 2010, you can see Ocasio-Cortez and a number of her BU peers dancing along to the Phoenix banger “Lisztomania” and re-enacting moves from The Breakfast Club (this was a trendy thing to do at the time). The playful, if a little dorky, video was the work of a film student, who made it for BU’s Howard Thurman Center for Common Ground, where Ocasio-Cortez was a student ambassador.

“We made it primarily to be a fun video to get people interested in the Thurman Center,” says Eric Baker, who produced the video and graduated from BU in 2013. He says the university also used to run it frequently on TVs around campus “just to kind of keep people feeling good about the school.”

But later, as Ocasio-Cortez’s star began to rise last year, Baker’s cutesy dance video became a magnet for trolls. “I turned off the comments months ago,” he says.

Versions of it continued to make the rounds in weird corners of the internet. One, posted to YouTube in July, refers to her as a “communista hottie.” A since-deleted post on LiveLeak from three days ago suggested the video showed she was “on drugs.” (Baker insists that is not the case. “We shot that at about 7 a.m.,” he tells me).

It’s frustrating to see a college project become a vehicle for mocking a friend, Baker says, but what can you do? “I think that if these folks, whoever they are, are gonna try and come at her with a wholesome, joyful video of her dancing, then best of luck, I guess.”

Plenty on Twitter have come to her defense, and mocked the idea that the footage was supposed to be embarrassing. There is now even an account dedicated to edited videos of Ocasio-Cortez dancing to various songs.

Oh shit, now that they’ve found a [spins wheel] video of her [spins wheel] remaking the dance scene from The Breakfast Club, set to [spins wheel] a Phoenix song, she’s done for! https://t.co/WvP6XLbzeC

Then on Friday, she responded with another video of her own, a short clip of her dancing to the song “War” in front of her new office. “I hear the GOP thinks women dancing are scandalous,” she wrote. “Wait till they find out Congresswomen dance too!”

I hear the GOP thinks women dancing are scandalous.

Wait till they find out Congresswomen dance too! 💃🏽

Have a great weekend everyone 🙂 pic.twitter.com/9y6ALOw4F6