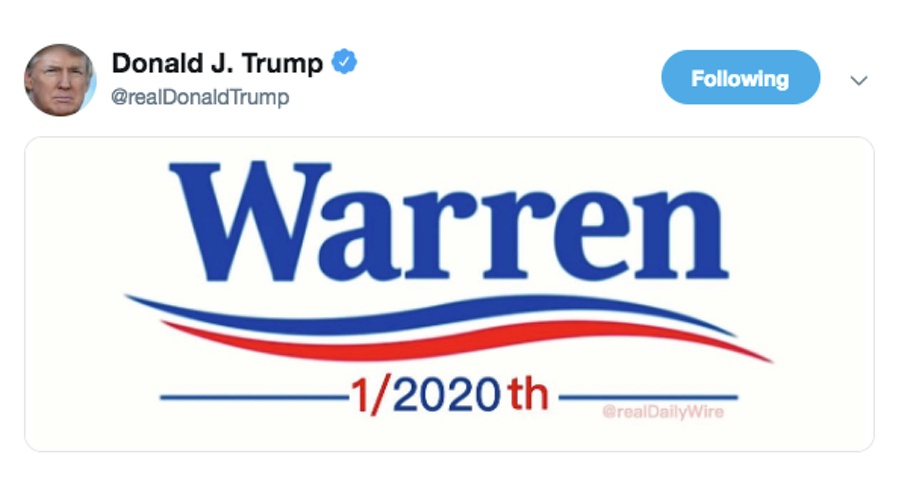 As Elizabeth Warren’s presidential campaign gets off the ground, President Trump is coming after his potential 2020 rival with a meme.

In a tweet on Thursday morning, the president tweeted an image showing a mock-up of a “Warren 2020” campaign logo, except the 2020 has been altered to read “1/2020th” instead. It appears to be a mocking reference to results from a test Warren took in October that showed she had a Native American relative 6-10 generations removed—meaning she herself had between 1/64 and 1/1,024 Native American genes.

Her decision to release those figures, along with a slick video and an in-depth feature in the Boston Globe, in an effort to put the “Pocahontas” attacks to bed once and for all, has been widely criticized as a futile gesture or worse. And as it was abundantly clear from the start, Trump and the conservative media were never going to be swayed by such a test, no matter what it said. It seemed inevitable that he would latch on to the relatively small fraction of DNA and dig in. He already has:

Pocahontas (the bad version), sometimes referred to as Elizabeth Warren, is getting slammed. She took a bogus DNA test and it showed that she may be 1/1024, far less than the average American. Now Cherokee Nation denies her, “DNA test is useless.” Even they don’t want her. Phony!

So now that Warren has announced the beginnings of a run for the nomination, and as a government shutdown nears the two-week mark, the president is doing DNA memes. It was the second time he’s done so this week: A poster print-out of a Game of Thrones-themed meme, starring Trump, could be seen on a table in front of the president during a cabinet meeting yesterday, for reasons that were not really clear.

The 1/2020th image appears to be the brainchild of the Daily Wire, a conservative website run by commentator Ben Shapiro, which tweeted a similar version on New Year’s Eve. A watermark of the site’s Twitter handle appears in the version Trump shared from his account, and the site confirmed the meme’s origins with a series of way-too-excited tweets and links to buy the meme in T-shirt form.