Was the Frog Pond Ever an Actual Frog Pond?

Have you wondered about the history of the Frog Pond on your annual ice-skating outing? 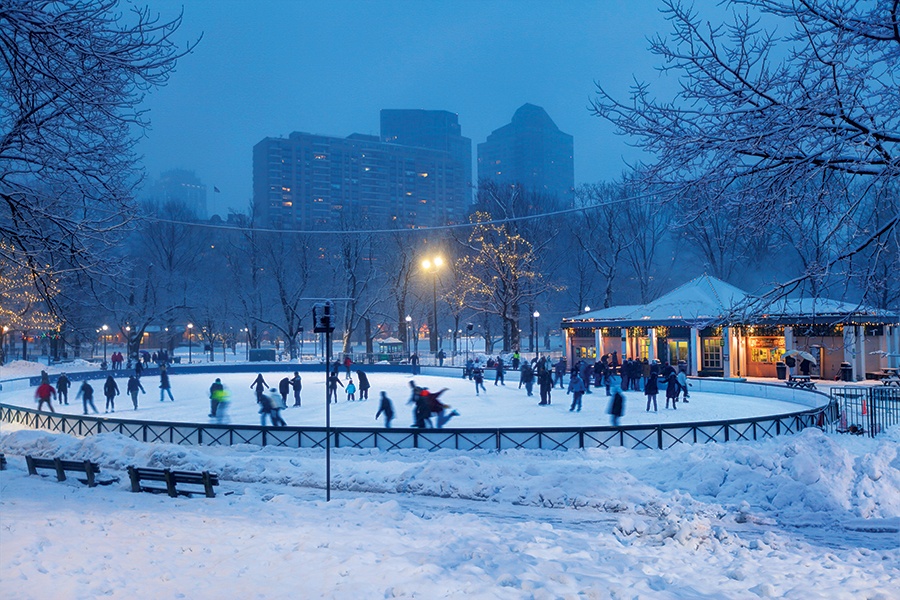 Every winter I take the kids down to Boston Common to go ice-skating on the Frog Pond. It’s been a family tradition for several years now, and I’ve always wondered: Was it ever an actual frog pond?

To be honest, J.S., for all the years that I’ve been going down to the Frog Pond with my kids, I’ve been more focused on the aggressive squirrels in this part of the Common…you know, the ones that rush down the trunks of trees and snap at you if you get too close. Or, worse, try to snatch your kids’ snacks, and when you attempt to chase them off, chatter at you and wave their tails as if to say, If you don’t hand over the crackers, I will make a meal of you and your tender kin. Wait, what was your question again?

Oh, yes, frogs! So after reading through many current and antique histories, I can only really give you a definite “maybe.” Historians have long established that the Common was once scattered with small ponds, and the Charles River ran much closer to our urban park than it does now. A 1910 account by Mark Antony De Wolfe Howe, meanwhile, referenced Colonials and French sailors celebrating the surrender of Cornwallis during the Revolutionary War with an amphibian repast: “Here, in the Frog Pond, the local tradition insisted that the common sailors of the fleet proved themselves true Frenchmen by hunting for frogs.” Howe also wrote that Bostonians used to fish there for “hornpout” (bullhead catfish), and from personal experience, I can say that where water is muddy enough for these bottom-feeders, there be frogs.

Still, the pond’s use during the early 1800s was more for slaking the thirst of cows, and there was even a movement to change the name to the more genteel Crescent Pond or Quincy Lake. According to an 1849 magazine, however, those monikers were never accepted by the locals, who insisted on sticking with their beloved “Frog Pond” because “all men are boys once.” Whatever the name, that natural watering hole was gradually converted to a manmade pool starting in the mid-1800s, when water from Natick’s Lake Cochituate was first channeled into its towering fountain. Still, if your kids are desperate to spot a few froggy friends, even in the dead of winter, all is not lost: You can find quirky frog statues by the water and another one up on the visitor center’s weathervane. Even better, they’ll let you picnic in peace.