How it all went down. 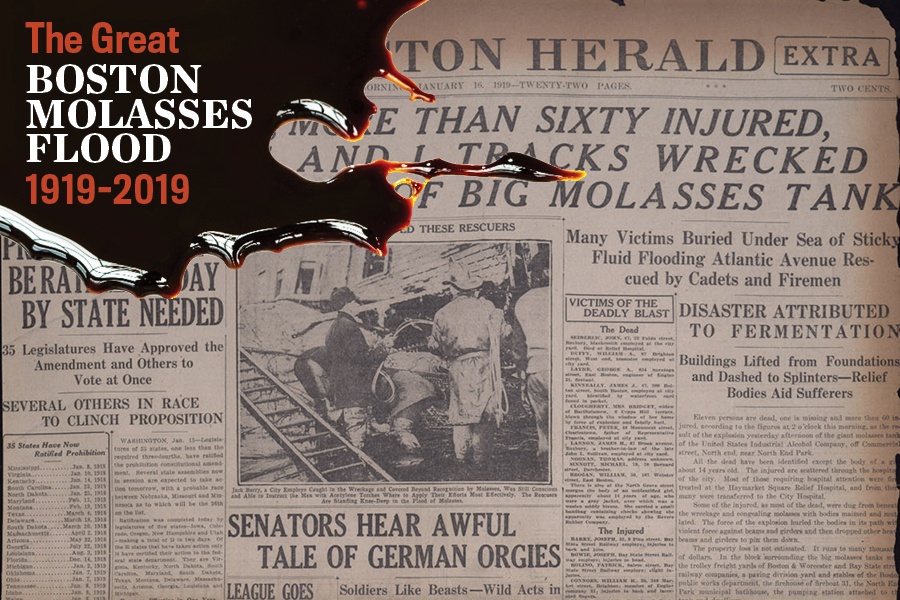 December 31, 1915: Amid high demand for molasses for industrial alcohol, construction wraps up on a tank standing nearly 60 feet high and 100 feet in diameter. Investigators will later say it was built hastily on an impossibly short schedule, and modern researchers will find its walls are not built to properly withstand the weight of a full tank of syrup.

Jan 13, 1919: After a shipment of molasses arrives from the Caribbean, the tank is filled nearly to capacity with an estimated 2.3 million gallons of sticky goo.

Jan. 15, 1919, 12:30 p.m.: It happens. The tank fails, bursting apart at its rivets and unleashing a gigantic blob of molasses, flowing at an estimated 35 miles an hour away from the tank in all directions. via Scientific American:

On January 15, 1919—an unusually warm winter day in Boston—patrolman Frank McManus picked up a call box on Commercial Street, contacted his precinct station and began his daily report. Moments later he heard a sound like machine guns and an awful grating. He turned to see a five-story-high metal tank split open, releasing a massive wall of dark amber fluid. Temporarily stunned, McManus turned back to the call box. “Send all available rescue vehicles and personnel immediately,” he yelled, “there’s a wave of molasses coming down Commercial Street!” (Scientific American)

May 12, 1919: It takes weeks to clean the mess, with help from powerful hoses spraying streets with ocean water, and get a full accounting of the dead. After a long rescue operation, the body of the flood’s last victim, Cesare Nicolo, is found four months after the explosion, floating under a wharf.

In all, the cleanup effort requires more than 80,000 man-hours. People tracked molasses all around the city, including on streets and subway platforms. The damages total an estimated $100 million in today’s dollars.

December 11, 1919: Stephen Clougherty’s death of tuberculosis in a mental hospital is the last attributed to the flood. He had reportedly been troubled by the incident and it had impacted his health. A judge, however, will not award his family damages.

April 28, 1925: US Industrial Alcohol Co., which owned Purity Distilling, which in turn owned the giant tank, is found liable after a three-year trial for improperly building and maintaining the structure. $300,000 is awarded to the plaintiffs who had suffered in the disaster ($30 million today). It becomes the longest and most expensive civil trial in Massachusetts history as a court grapples with several questions. Per Smithsonian:

The reason for the lawsuits was disagreement as to the nature of the disaster. What in the world had caused it? Three explanations arose: there had been an explosion inside the tank (in which case the fermentation of the molasses would be to blame); there had been a bomb set off (not so wild a possibility in those early days of Bolshevism—bombs had already blasted a few American industrial plants); there had been a structural failure of the four-year-old tank (which made United States Industrial Alcohol liable). (Smithsonian)

1938: The case proves to be a landmark one, swept up in a revolution in how government regulates big business. As the Pacific Standard writes:

[F]ame (or lack thereof) aside, the Boston Molasses Disaster still marked a major moment in American public policy. It led to a shift in how cities and states evaluated and regulated construction standards, first in Massachusetts and them nationwide, triggering the sudden promulgation of requirements and restrictions governing the concrete and steel that American cities are made of. And, more importantly, it made regulation a tool of the taxpayer, rather than the mere inconvenience it had previously been for business magnates.

Meanwhile, having stayed in business after the flood, U.S. Industrial Alcohol Co. continues to thrive as a profitable company, making products such as paint thinner and dye. It’s sold in a merger in 1938.

1995: The first and only official public memorial to the disaster, a green-and-white plaque, is placed at the former site of the molasses tank, which is now a harborside park.

2015: A new report from engineer Ronald Mayville finds that the tank’s walls were too thin by about half, and were made of an inadequate blend of steel that made it too brittle. It also points to other design flaws, including rivet holes that weren’t properly reinforced.

2016: Additional research by a team at Harvard concludes that temperature played a role in the deadliness of the disaster. The cool January air in Boston likely turned the quick-flowing mess into a slower, stickier one, complicating rescue efforts and ensnaring victims. (Video of their experiments, available in this New York Times article is worth watching).