Why Doesn’t Boston Do a Better Job of Commemorating the Great Molasses Flood?

All we have is a puny green plaque—for now. 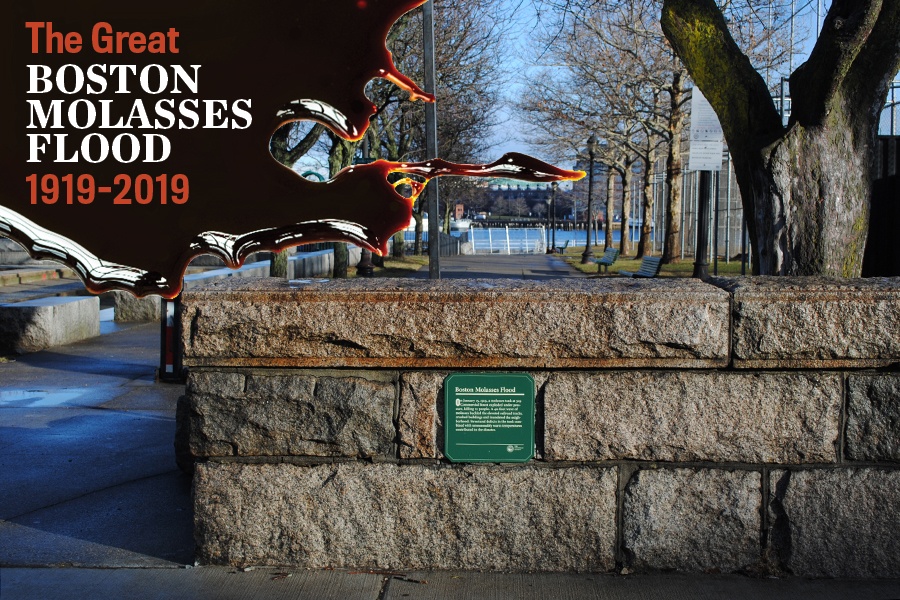 While strolling along Commercial Street on a recent January morning, I kept my head down. I was inspecting the sidewalk closely, searching for a plaque marking one of the craziest—and deadliest—disasters in Boston’s history.

I scanned the street until I found what I’ve never once spotted before: a small green sign on a stone wall, positioned about a foot or so off the ground. “Boston Molasses Flood” it read in white lettering, followed by a three-sentence description of the event that occurred 100 years ago this month. At the moment, the small sign is the only marker honoring the Great Boston Molasses Flood, a tragedy that killed 21 people in the North End. And if I wasn’t looking for it, I may not have seen it at all.

The story of the Great Boston Molasses Flood has long captured the imaginations of history lovers across the country. A molasses tank explosion that sent a 15-foot-high wave of sugary sludge sweeping through Boston sounds comical, and to some, a little far-fetched. But at the time, it was pure horror. People caught in the clutches of the wave suffocated to death. Pieces of the exploded molasses tank knocked down elevated train tracks and crushed buildings. The flood hit the working-class immigrants of the neighborhood hardest, killing and injuring people like wagon drivers, paving yard laborers, blacksmiths, and unsuspecting victims inside their homes. Two children home from school during lunchtime perished while gathering firewood. Beyond the havoc it wreaked, the tragedy resulted in one of the state’s first class-action lawsuits, and set precedence for modern zoning laws. But there isn’t enough room to communicate all of that on a small green sign.

“Insufficient plaque for the sheer tragedy that occurred here,” reads one Google review for the marker, which boasts a rating of 4.5 stars. “This is an often forgotten but very interesting piece of Boston history,” reads another. “Best to do your research before going as there is no local information on site other than the plaque.”

The sign was installed by the Bostonian Society, a preservation organization that maintains the Old State House, in the mid-1990s. They placed it on a squat stone wall along the perimeter of the North End’s Langone Park, during a time when the Society was installing historical markers all over the city.

Indeed, it’s better than nothing. In fact, I’m also thankful it exists—and grateful to the Bostonian Society for installing the first-ever plaque there. Because for about 75 years, there was nothing.

“I have heard people say that they’ve had a difficult time locating the plaque, especially because it’s not at eye level. But I think it’s great that it’s there,” says Alex Goldfeld, president of the North End Historical Society. “It’s a good start.”

But can’t Boston do better?

Some folks are trying. A group called the Friends of the Harborwalk has received approval from the city to put up a larger sign. As part of a years-long initiative to install more interpretive signage along Boston’s 43-mile Harborwalk, volunteers are creating a 32-inch by 24-inch sign in Langone Park. It will feature a more detailed history of the molasses flood, along with photos and a small map. Liz Nelson Weaver, the group’s signage committee team lead, estimates it will be installed near the park’s Little League fields in late 2019 or early 2020.

So, still no memorial. And until then, we’re stuck with the little green sign. 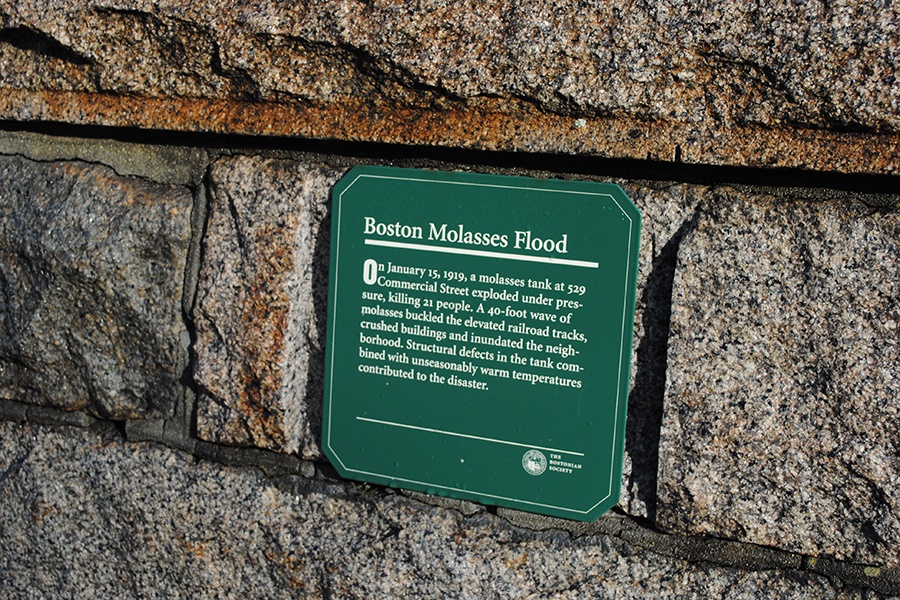 “It’s more like a street sign that’s been nailed into a wall that’s about knee-high as you enter this playground,” says Bryan Webb, a civil engineer working in Cambridge. “It almost looks like a park sign, like ‘Please clean up your trash,’ or something. You know what I mean? It’s that small and unnoticeable. It’s kind of sad that’s all there is.”

Back in 2014, Webb proposed installing a molasses flood memorial along the Rose Fitzgerald Kennedy Greenway. He was answering a request for ideas from the Massachusetts Department of Transportation and the then-Boston Redevelopment Authority, which sought to find new ways to use land along I-93.

Webb knew the flood’s 100th anniversary was coming up, and drafted designs for a park-like setting where a dome with the same dimensions of the original molasses tank would be turned on its side, allowing people to walk under it. The proposal included two small pools, a fountain, and a wall listing the names of the flood victims.

“My idea actually got a good amount of traction,” Webb says. “People were supporting it. The neighborhood seemed to really like it.”

Webb’s memorial was to be installed on a parcel of land across from the Haymarket bus station. But after some deliberation, Webb’s proposal was ultimately denied by MassDOT. Five years later, that parcel has yet to be developed.

Even if a molasses flood-themed park isn’t a possibility, it’s still puzzling for the site of the explosion to lack a statue or memorial. We’re a city known for its history—and one chock full of historical markers. We even have one built into the ground beneath our feet.

“On the other hand, if there were a monument to every historic thing in the city, we would not be able to move,” reasons Goldfeld.

Yet there are still plenty of statues here that don’t have historical meaning at all. Consider the Leif Erikson statue on the Commonwealth Avenue Mall. It was placed there in 1887 by a peculiar, deep-pocketed man who was (wrongly) convinced the Vikings first settled in Boston. There’s also the donkey statue in front of Old City Hall. That one was installed by the president of the Architectural Heritage Foundation after he bought the bronze burro for just under $10,000 in Florence, Italy. He concocted a fake backstory for the thing to convince city officials to let him put it there, and somehow, it worked.

Rich eccentrics aside, there is always the question of funding when it comes to erecting a monument. Most statues come about thanks to community organization and fundraising. And while a more informative sign is a step in the right direction, there should be something more. Langone Park is almost too perfect a spot for a monument, as the community green space overlooks the harbor, offering Little League fields, three bocce courts, and a playground.

“Down on that waterfront, you have an opportunity to do something a little bit meaningful,” Puleo says.

Until that day comes, we’ll have to remember the victims of the Great Boston Molasses Flood without bronze-cast visual aids. There’s hope yet.

“I will say there’s a big monument to the Boston Massacre victims on Boston Common that was put up 118 years after the incident. So, sometimes it takes a long time, or a big anniversary, for people to get re-energized about a particular event,” Goldfeld says. “Maybe now’s the time.” 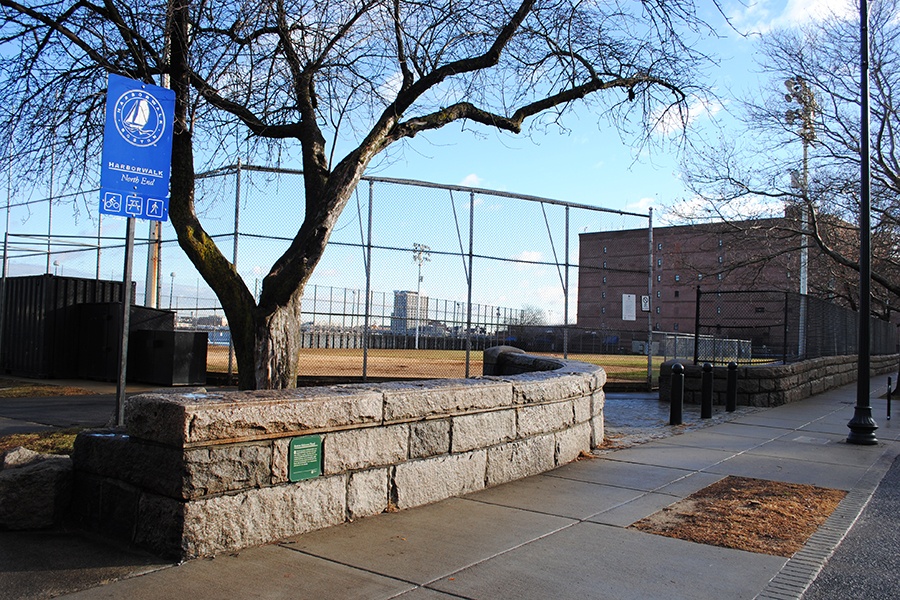