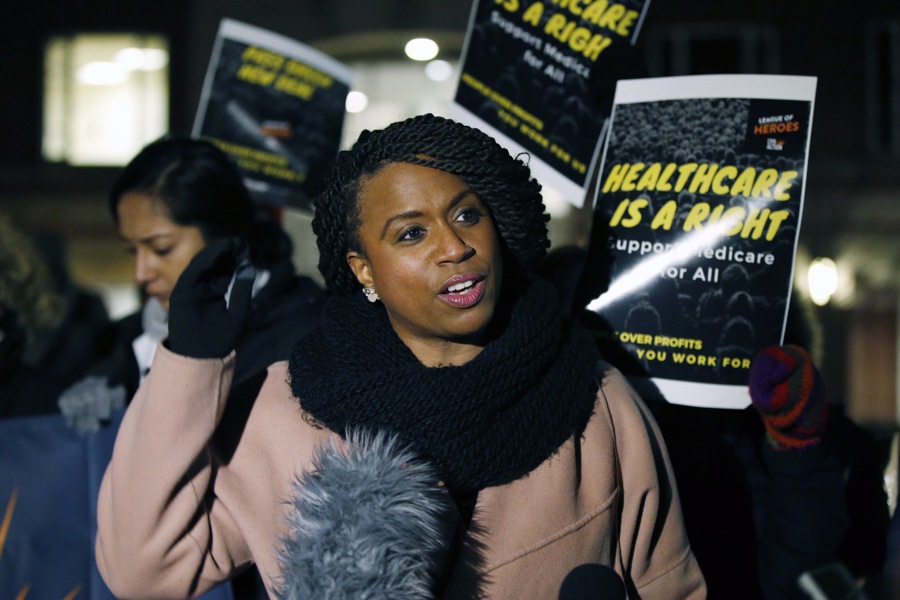 Rep.-elect Ayanna Pressley, D-Mass. speaks at a small rally outside an orientation meeting for incoming members of Congress at Harvard University in Cambridge, Mass., Tuesday, Dec. 4, 2018 | Photo via AP/Michael Dwyer

Two years after it greeted the start of the Trump Era with a massive demonstration that drew more than 100,000 in the heart of the city, the Women’s March returns to Boston on Saturday, January 19.

Thousands are scheduled to gather on Boston Common beginning at 10 a.m. Speakers take the stage at 11 a.m., including Congresswoman Ayanna Pressley, who is listed as the event’s “Honorary Chair.” Pressley was elected to the House last year in a race that saw her take on a male incumbent in her own party and become the first black woman to represent Massachusetts in Washington. A march around the Public Garden and Commonwealth Avenue begins at 12:30.

“On this worldwide day of action, we show up together in solidarity with women and allies, in service of those who are most at risk from an agenda that seeks to marginalize and divide us,” the nonprofit March for Massachusetts writes on its event page on Facebook. “Our work that was outlined by the original Marches is far from complete. We continue to march forward, building energy and welcoming ever more activism into the arena, until the systems of supremacy which oppress us are dismantled.”

As of Friday afternoon, more than 5,000 people said on Facebook they would attend, and 21,000 indicated they were interested.

ONE day away from the #2019BostonWomensMarch. Tomorrow people from all over the state of Massachusetts will come together and take a stand for religious freedom, human rights, climate justice, racial justice, economic justice, and reproductive justice. Our voices will be heard! pic.twitter.com/QcaQOI8nkV

Held the day before Martin Luther King, Jr. Day, the march is one of more than 300 to be held around the country at the same time. It also comes amid a controversy roiling the Women’s March movement including allegations of anti-Semitism, which in New York has notably led to two competing marches held at the same time in the same city. Boston’s organizers have sought to make clear that this event is independently organized by local activists. A coalition of area groups, including the local branches of the ACLU and NAACP, as well as the Boston Area Rape Crisis Center and NARAL Pro-Choice Mass.

They’ll have some company. The right-wing group Resist Marxism says it plans to be there as well to challenge the march’s message.

As the day rolls on Saturday, a storm will be brewing, but forecasters say the mix of snow and sleet is not expected to arrive until the evening. In the meantime, marchers can expect sub-freezing temps but clear skies.