Why Dunkin’ Dropped the “Donuts”

An interview with Tony Weisman, the chief marketing officer of Dunkin' Brands. 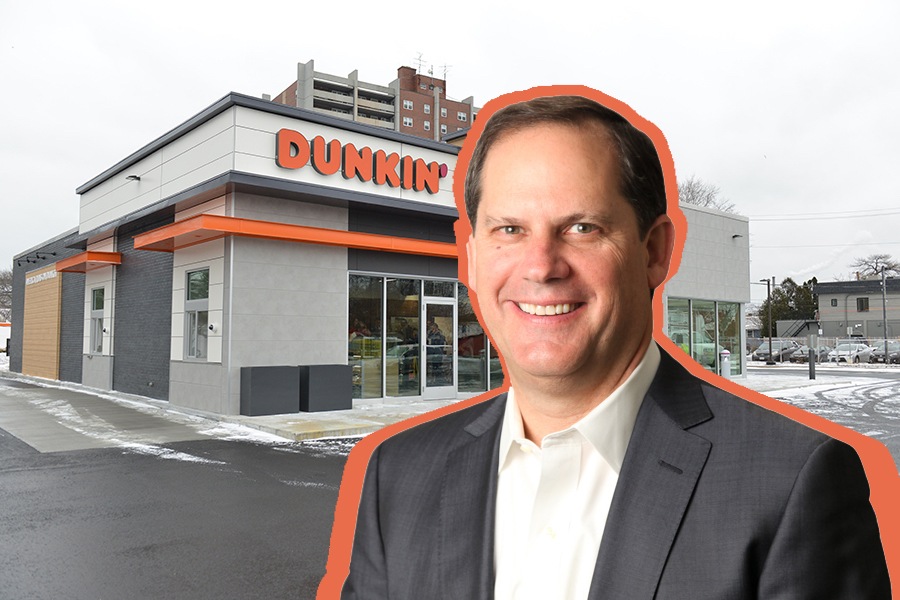 Whether you love or hate its new image—the brewery-style taps, the cutesy pastry cases, the exposed ceilings, the conspicuously missing “Donuts”—Massachusetts’ most famous brand is changing for good. Leading the coffee chain into its bold new future, at least in terms of how the place looks and feels, is Tony Weisman, the chief marketing officer for Dunkin’ Brands. The Chicago native hasn’t been in the role very long, taking over in late 2017, but he’ll be in charge this year as a massive effort gets underway to rid thousands upon thousands of Dunkin’ locations of that second pesky word. Whether the coffee chain Massachusetts grew up with will leave us behind as it expands to unconquered corners of the world remains an open question.

In the meantime, we wanted Weisman to explain. Our conversation has been edited.

So from your perspective, and the perspective of Dunkin,’ how was the decision made to drop the name. Why did you do this?

Well I think it started with understanding that we’re on a journey to modernize the brand. To me, it all starts and ends with the next generation restaurant that you see, whether it’s in Quincy or some of the restaurants that have opened in Downtown. They are a bright, modern take on our brand with sort of the exposed ceilings, the forward-facing doughnut case, the taps, et cetera.

So if you think about everything we’re trying to do to modernize, we felt like we should take a look at our brand identity, which, by the way, has gone through six iterations in 70 years. So we have not been afraid over the last seven decades to modernize the look and feel of the brand. So it just felt like, ‘OK, let’s look at it, what do we want to do?’

What did you want to do?

Well frankly the current branding has a coffee cup in it that dates back a couple of decades, to a point where we wanted to tell people we were more beverage lead than doughnut lead. We got that point across.

Secondly, with three billion doughnut and munchkins sold a year, we’re not backing away from doughnut, but is there a cleaner and more modern way to just express the brand?

It’s a very visual world. If you look at social media and mobile devices, things are very graphic. I look all the time at the app store, and branding on an app is the most dynamic and simple expression of that brand’s identity. So much so that Uber just changed theirs. You see this with Google changing and Instagram. They’ve all spent a ton of time trying to make the identity of that brand as visual as possible. We’re perceiving the world through small screens.

A decade ago, emojis were not a big thing and nobody knew what a GIF was, and now they’re the dominant forms of peer to peer communication. So in that context, I think we wanted to say, ‘So how do we modernize the brand?’

We dropped the coffee cup, and I think dropping the name—I think about it less as dropping the Donuts and focusing more on Dunkin’. Dunkin’ is who we are. Dunkin’ is how the brand is referred to. You know that for a decade we’ve been ‘America runs on Dunkin.” Consumers say “I’m heading out to Dunkin’ or ‘dunkies’ or ‘dunks.'” You know that better than I do.

So then we started experimenting and the easiest way to experiment was to just put it on the restaurant. By and large, it was either unnoticed or consumers were like, ‘That’s the Dunkin’ I know.’ Why? Because what really is retained are the colors pink and orange and the font. The font, which was created in 1973 and is known as Dunkin’ Frankfurter, is highly recognizable. So I think if you stay with the images most clearly identified with our brand, pink and orange and the Dunkin’ Frankfurter font, and the word Dunkin—I think you’re communicating the brand in a modern way that fits with that next generation experiment.

Why try it out in the heart of Boston? Was it a stress test? Like, you know, what is Boston going to think of a Dunkin’ Donuts that is now called Dunkin’ and looks and feels very different right next to Boston Common?

Yeah, it was a stress test to use your term. Although I think we thought about it more as how do consumers respond in our core heritage markets and how do they respond—I mean, bear in mind that we installed it in Pasadena, California even before that. So we were equally interested in markets where we have a multi-generation history and markets where we are a newer brand. We spent a ton of time talking to consumers and overall the reaction in both places was very, very positive.

That’s true: I talked to a separate consumer sentiment research firm based in the Seaport that told me more or less the same thing. They looked at social media reaction and people were in favor or were neutral.

That’s very gratifying to hear. I’m glad you checked it out, thanks for telling me. Our data would vouch for that too.

Did you expect more of a backlash than you got, or what did you think was going to happen?

I’ll tell you what I felt, I think what we felt going into it was that it would be generally well-accepted. The metaphor that we used was Fenway Park. Fenway has done a beautiful job over modern ownership to both modernize the ballpark but retain its essence. I think if you look in the last decade, whether it was seats on the Green Monster or video screens or what have you, generally speaking maybe there was a little grumbling at first. But by and large, I think the community of Sox Nation has very much embraced all of these because they were done with the essence of the brand at heart.

That was our goal. If we were going to radically change and walk away from the essence of the brand, then I think we might have expected that backlash, but we weren’t.

In the end, Boston and New England consumers are very focused on your intent. They are very much about authenticity. You can say a lot of things about New England stereotypes but I think it boils down to authenticity matters above all else. If what you are trying to do is authentically you, then you’ll get a green light. I’d like to say that was very much on our mind and I think the reaction very much matched that.

Were there ideas that came onto your desk where you thought, ‘This is over the line, people are never going to take kindly to this?’

Well there always are and we looked at a wide range. Yes, there were some, but none that we took seriously.

Can you talk about that? Or some of the things that Dunkin’ does not want to be? I look around the city right now and I see, for example, there’s a Caffè Nero that just opened up across from our office with a fireplace and whatnot.

Yeah I think there are some things we don’t want to be and very purposefully. You point out Tatte, Nero, etc. I think they have a well defined business model and footprint that says, ‘Come in and spend some time.’ If you want to spend a couple hours on your laptop and write a novel or do a blog entry or whatever, this is the place for you.

We are not that. We are a ‘Come in, get what you want, get in, get out and get on your way.’ We are very much about not adding friction to your life, at all. We think that works.

People are on the go because maybe they’re gig workers. There’s an explosion in the gig economy and maybe they’re, you know, moving between gigs. People spend less time in formal offices. They work away from home, they work remotely, they work in communal space. People are moving around in all forms of transportation, whether it’s Ubers or scooters, or bikes, or whatever. We have an on-the-go lifestyle, highly enabled by mobile devices and wireless and wifi. In that world we think we fit very nicely. That’s what we want to be.

Do you see the brand as a quintessentially Massachusetts, Boston, New England brand that has been exported to the rest of the world?

I see it slightly differently than that. I see it as a New England heritage brand. And I mean that, and I’m going to use other analogies as well like the Sox, like the Pats— they’re heritage, they’re fan-based, they’re multi-generation, but there are fans everywhere. We have fans everywhere. So, I would modify it slightly to say that we are a New England heritage brand, but we think we are right for every community, everywhere.

Do you feel an allegiance to Massachusetts though?

One hundred percent. We launched our ‘Boston Proud’ campaign here a few months ago. I think you’ve seen some of that. Home is home. Home will always be home.

Even as the brand is adapted for a global audience?

With 13,000 restaurants worldwide, we have got communities all over the world. We are 100 percent franchised, our franchisees are active in those community schools and sports teams and activities. I think it’s in our DNA that being part of the community is critical to us and this was the first community we have the pleasure of being a part of.

Do you consider Dunkin’ to be the, like, everyman brand, in contrast to all the fancier options out there?

I see it slightly differently, but philosophically I’m where you are. I see it as an accessible brand to everyone. When I first got here, I had the pleasure of meeting Robert Kraft and he, one of the first words out of his mouth was, ‘I’m a Dunkin’ guy.’ And what a Dunkin’ guy means to a highly successful billionaire owner of a franchise like that is, ‘I have not forgotten my roots, I work hard everyday, and I have values that matter.’ And he is notorious, maybe not notorious, maybe renowned is what I should say, for his love of Dunkin.’ He frequently will pay it forward with guests in line, and his motto in life is pay it forward, so for him, this much is expected. Those values are Dunkin’ values, regardless of your income, your job, where you live, how you live. And to me, I think that’s the spirit of the brand.

One last thing: I’m curious about what you thought about the Casey Affleck bit on SNL. Did you have any takeaways from that?

So that predates me, but I thought as a viewer and someone who has heard about it from a lot of consumers, that, Casey grew up here, Casey has a lot of history with this brand, so my sense in that is that it was done with love. And everybody knows it was over-the-top because it was SNL, but it came from a place of love.