Snow Squalls and Bitter Cold: How We’ll Feel the Polar Vortex in Boston

A system that brought dangerous Arctic chills to the Midwest is headed our way. 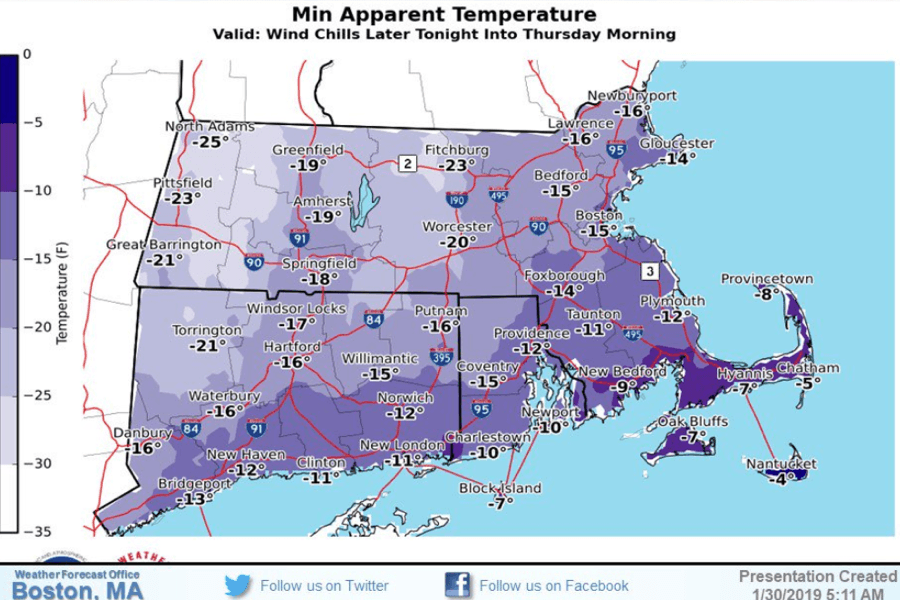 A weather system that has blasted the Midwest with bone-chilling Arctic wind is quickly making its way to Boston (thanks a lot, polar vortex), promising to deliver potentially dangerous snow squalls and cold.

The National Weather System in Norton has been getting the word out today about snow squalls that have been seen along the outer edge of the ultra-cold air, and which it warns could arrive quickly and make driving hazardous Wednesday afternoon.

“It’s in central Pennsylvania now,” says meteorologist Bill Simpson, reached by phone at around 10 a.m. “In a brief period a lot of people may be traveling in blue skies and then in the next few minutes see total whiteout conditions.”

Squalls are expected to arrive sometime between 3 p.m. and 7 p.m. in Boston. The NWS advises drivers to pull over when they hit, and wait for them to pass.

[High Impact Snow Squalls] A line of heavy snow squalls expected to move through SNE 3-7 pm. Snow squalls will result in brief whiteout conditions, strong wind gusts and up to a quick inch of snow which may have a significant impact on travel for the evening commute. pic.twitter.com/DYllgnFA48

In the morning, we’ll see the start of what Simpson calls a “glancing blow of extreme arctic air.” Wind chills Wednesday night into Thursday morning could plunge as low as minus-15, the National Weather Service forecasts.

In the meantime, wind chills in Western Mass near minus-25 have already been cause for concern, even if it’s not as intense as in other states, including the 10 where they even stopped delivering the mail, or Chicago, where they’ve had to set their train tracks on fire.

“It’s not nearly as bad as the upper Midwest but pretty bad if you’re not used to it,” Simpson says.

A wind chill advisory has been issued for most of Massachusetts, while a wind chill warning is in effect for the state’s western edge. So it’s best to be cautious, and be sure to wear extra layers.

“If you’re not dressed properly you can lose body heat real fast in the wind chills this evening,” Simpson says.

After the Arctic front this afternoon into evening it’s going to get cold … very cold. Headlines posted for wind chills 10 to 30 below zero tonight going into Thursday as lows drop below zero for most of S New England and it remains blustery out of the W. pic.twitter.com/F8DEoDvnOY