Wow It Is Incredibly Cold Out There in Boston 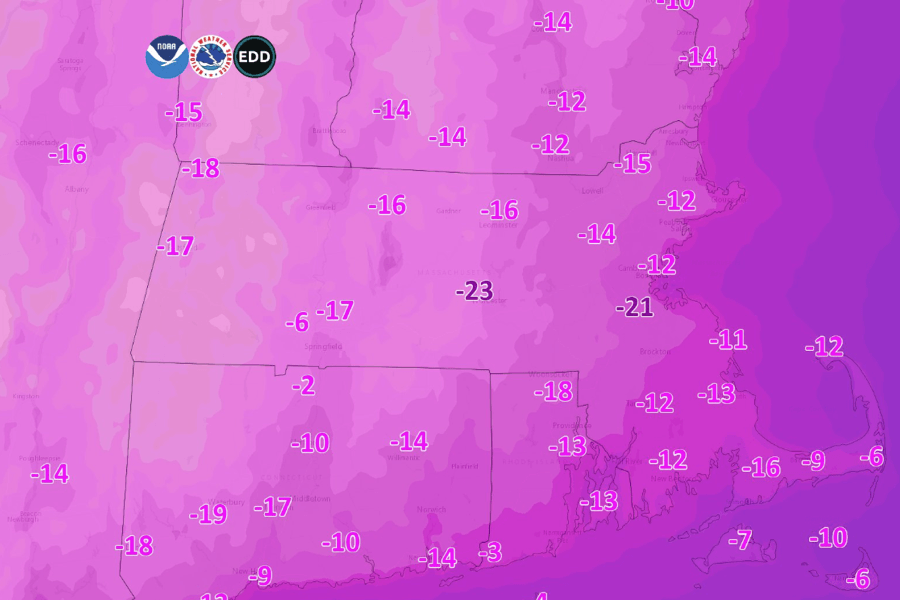 How many layers are you wearing right now? Hopefully plenty of them if you planned on heading outside in Boston Thursday morning, after the polar vortex’s incursion into much of the U.S. arrived in Boston.

Serious cold and skin-scorching wind chills greeted early morning commuters on Thursday, as the felt temperature in the city dropped to minus-12. Central Massachusetts communities saw temps drop as low as minus-25 (!).

That came after the furthest reaches of the Arctic blast soared through the city, bringing snow squalls—the quickly arriving snow storms that brought whiteout conditions to roads. That wasn’t the last of the driving hazards wrought by this unusual weather event: The National Weather Service warned of roads slick with ice from the deep freeze, despite the fact that the region didn’t see any rain. Much of it, the forecasting office says, is impervious to road salt.

[415 am: Bitterly Cold Temperatures/Wind Chills] Bitterly cold early this morning with actual temperatures between 5 below and 5 above zero. Wind chills were between 10 and 25 below zero! Dress in layers as frostbite can occur in as little as 30 minutes on exposed skin. pic.twitter.com/Vgk6oIppSH

The sun is expected to help temperatures rebound a bit, but only into the teens. Highs on Friday are expected to remain below freezing, at about 21 degrees.

Students in Boston found their school days were going on as planned Thursday. Boston Public Schools was warning students to be safe in the chill, and of course, to dress appropriately.

Air temp tomorrow, 1/31, will be at near-record levels and wind chill temps will be well below 0 degrees. @BostonSchools urges all community members to make sure to bundle up and wear multiple layers, a winter coat, hat, and gloves or mittens. Cold safety: https://t.co/jGPW40J3HZ pic.twitter.com/RLMP5jQUcB

It’s been a truly weird, and in some cases tragic, couple of days. In the Midwest where temperatures have been recorded at record lows, at least six people have reportedly died in the elements.

In Boston, efforts to get the homeless into shelters were underway.

Thank you to the hundreds of volunteers who braved the cold weather to go into our neighborhoods and make sure that those who were out in the frigid temperatures knew their options of where they could get a warm nights sleep tonight. #LookToBoston https://t.co/5FeYEnIycF

For locals, the storm also introduced us to a concept that many had never heard tell of before: The snow squall. You may have gotten an alert on your phone about its arrival Wednesday evening. On social media, many were puzzling over the seemingly new term and gawking at photos of the wintry wrath.

What the hell is a #snowsquall? Besides something everyone is about to be lretending they have always known about. #Boston #massachusetts pic.twitter.com/qmUMAN70zJ

Intense snow squall just outside of Boston around 7:20 PM. Now comes the arctic air! Wind chills will be 15-25 below zero Thursday morning. pic.twitter.com/g5hUZgYgn8