He has a snowy update on Net Neutrality for you. 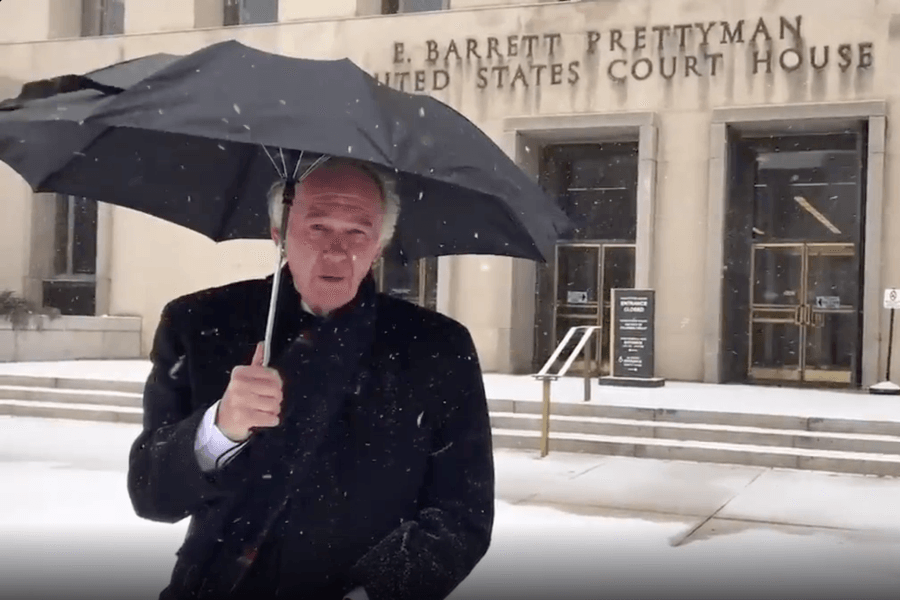 U.S. Sen. Ed Markey has had a big week. It’s been announced that he and rising Democratic star Alexandria Ocasio-Cortez are teaming up on one of the buzziest pieces of Legislation in the new Congress, the so-called Green New Deal. He also helped reintroduce a bill that would make it our policy not to launch a nuclear weapon at another country unless we’re struck by one first.

He also has a snow-and-wind whipped update for you about Net Neutrality.

“Today in this court, the fate of the internet is going to be decided,” a frozen Ed Markey says in a video posted to Twitter Friday morning, as he nods in the direction of the E. Barrett Prettyman United States Courthouse in Washington.

He continues, as an umbrella bobs and weaves in the chilly air, his thick Boston lilt a bit more mumbly thanks to the fact that he is, I’m guessing, a little numb: “Will we protect Net Neutrality? Will we protect the freedom of the internet or not? The case is going go be decided today. I have filed an amicus brief on behalf of Net Neutrality and internet freedom. The case is the most important in the history of the internet.”‘

The case he’s talking about is up for debate before the D.C. Circuit Court of Appeals, and seeks to overturn the Trump FCC’s decision in 2017 to undo an Obama-era policy that kept big companies from having control over the web’s speed and accessibility. His amicus brief was signed by more than 100 members of Congress. You can read more about that here. It is in fact very important, and it’s the kind of thing it might be easy to forget about while so much else is going on down there.

I’m at the D.C. Circuit Court where the case to save #NetNeutrality is getting its day in court. Whether in the courts or in the halls of Congress, we will fight to defend the free and open internet. pic.twitter.com/w2xwfHSPcw

Is he OK out there?

Is this a new thing he’s gonna do now?

Why does he have an umbrella?

Where are his gloves?

How did he not slip in an acronym of some kind?

OK, that’s all. Have a great day, everyone.