How to get around when it goes down on Sunday. 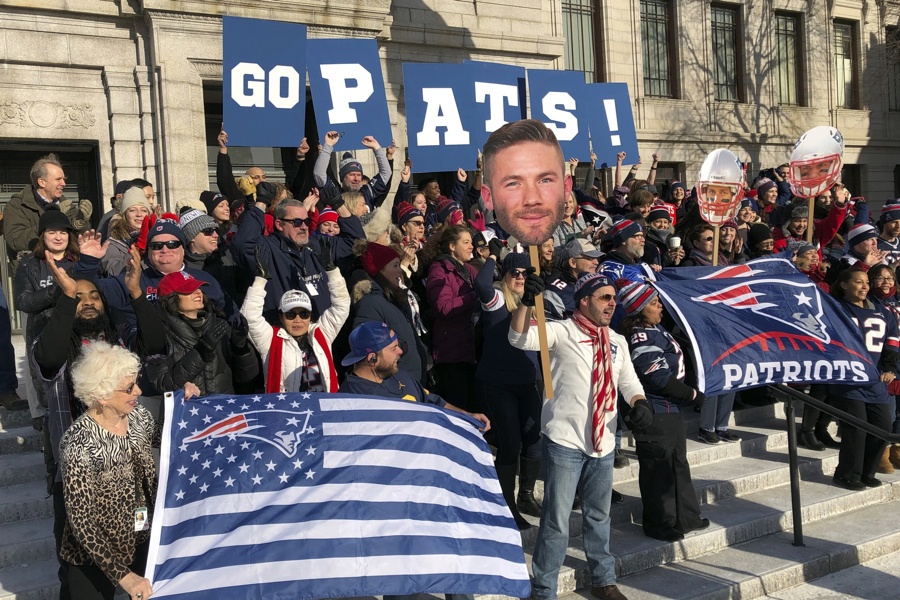 Workers at Boston’s Museum of Fine Arts rally outside in New England Patriots garb on Friday, Feb. 1, 2019 in Boston. The museum and Los Angeles’ J. Paul Getty Museum are trading a little trash talk ahead of the Super Bowl between the Patriots and the Rams. (AP Photo/Bill Kole)

If you’re planning on celebrating the Super Bowl in Boston this Sunday, make sure you’re paying attention to the parking restrictions and street closures that take will take effect the day of the big game.

In a pre-championship press conference Friday morning from the temporarily renamed “Belichick Room,” Mayor Marty Walsh announced that road closures will begin at 9 p.m. Sunday and continue until 1 a.m. Monday.

Tune in live at 10:00 am at https://t.co/2uhszJXi12 to watch our #SuperBowl Safety press conference ahead of Sunday’s game. #EverythingWeGot pic.twitter.com/7BMtMrGM8t

The city also provided an update on security, noting that once police will have a presence in areas that, per experience, tend to attract a lot of revelers in situations like these. Kenmore Square will once again be off-limits to cars and pedestrians after the end of the third quarter. Thankfully, as a city of champions, we’ve gotten pretty used to winning, and the celebrations tend to go off pretty seamlessly. When the Sox won the World Series last year, there was only one arrest.

Walsh’s message to fans, regardless of team loyalty: “Just respect each other.”

As is tradition, Commissioner William Gross has already issued a letter to Boston-area students warning them not to do anything stupid—if anyone gets out of line during the post-gam celebrations, he’s even threatening to tell their deans.

Here’s what you need to know so you don’t get towed, per the city’s website:

Planned street closures in effect from about 9 p.m. – 1 a.m.