Look at these two. 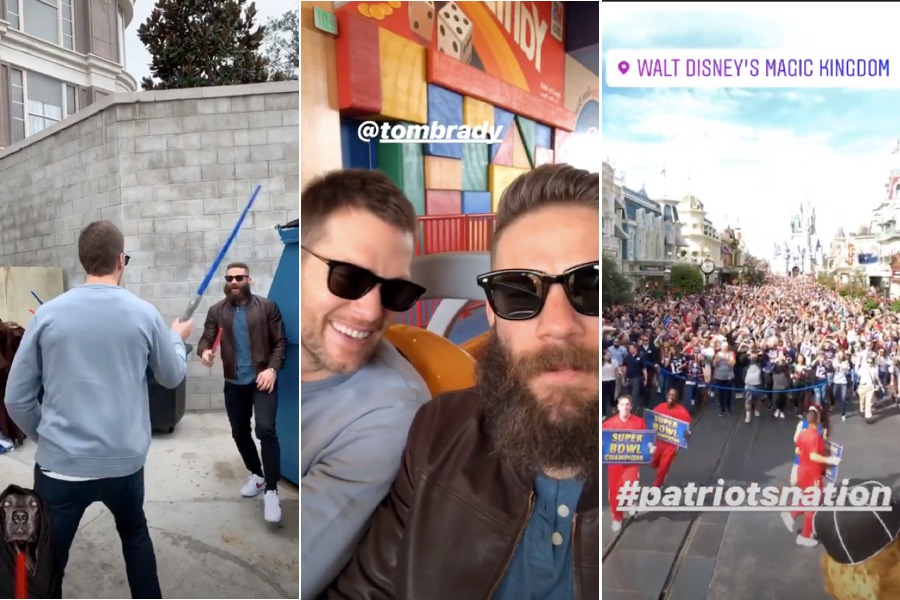 Less than a full day after the duo led the Patriots to another victory at the Super Bowl, Tom Brady and Julian Edelman are cutting loose in The Most Magical Place on Earth™, jetting to Disney World to soak in the glory and play with lightsabers.

In videos posted to Edelman’s Instagram story Monday, the two can be seen hanging out and clowning around like a couple on a honeymoon, including sitting side-by-side on the park’s Toy Story ride. “Who’s Buzz Lightyear and who’s Woody?” Edelman asks in one clip. Brady suggests that he’s the Buzz of this bromance. Edelman disagrees. “But you’re the sheriff, bro!”

In another video, the GOAT and the MVP duel with Star Wars lightsabers (next to a dumpster for some reason). Edelman ended up with the red-hued saber linked to the Dark Side of the Force, and from what I can tell, the duel was a draw.

It looks like there were plenty of Pats fans to greet them down in Orlando, as throngs gathered for a Super Bowl celebration parade, including many in Pats jerseys. The videos show Edelman and Brady teaming up to lead them in a chant counting up to six (you know why).

Brady shared a photo from the trip on his Instagram as well, which showed him embracing Minnie Mouse along with the caption, “Mr. Steal Yo Girllll.”

If it feels like you’re missing out on all the fun, fear not. Brady, Edelman and the rest of the gang are due to ride on a fleet of Duck Boats Tuesday morning for yet another Super Bowl victory parade with an estimated million-plus crowd. And as luck would have it, we’re expecting unseasonably warm, almost Florida-like temperatures.

Maybe the real Magic Kingdom is Boston after all.

Tom Brady and @Edelman11, you and the New England Patriots just won the #SuperBowl. What are you going to do next? pic.twitter.com/TGVZDOhfIk