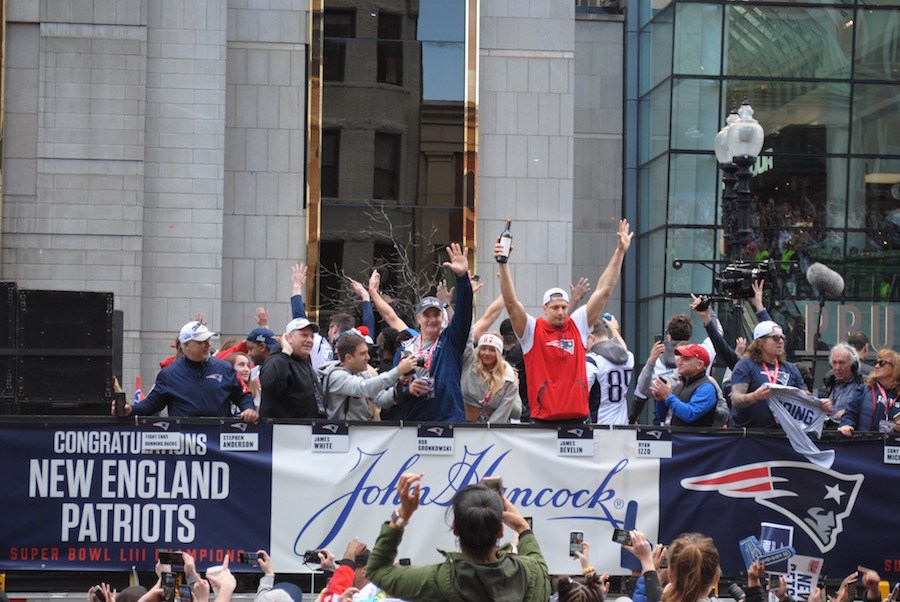 In a development that should surprise no one, Rob Gronkowski spent the Patriots victory parade shirtless, dancing, and generally loving life in exactly the Gronk style we’ve come to expect from the undisputed party king.

He got things started swathed in a red-white-and-blue poncho.

But eyewitnesses confirm he quickly traded that outfit for a bright-yellow police vest, origin unknown.

it is canonical that Gronk is supporting Mouvement des gilets jaunes and is on the side of the French working class pic.twitter.com/aps2UeAtvQ

Against the urging of city officials, fans did in fact toss him cans of beer, which he effortlessly snatched out of the air.

That wasn’t all he was tossing back. A somewhat more refined Gronk was also spotted along the parade route sipping from a bottle of $600 red wine.

Gronk has a full bottle of wine on the parade bus

Someone apparently also tossed him some Tide Pods, which he thankfully did not eat.

On my lunch break I saw a shirtless Gronkowski dancing to Sicko Mode, catch a Bud Light, shotgun it, then catch an empty canister of Tide Pods before tossing it back into the crowd. How’s your Tuesday going? #PatriotsParade pic.twitter.com/885OSES6rd

So he parties incredibly hard, but not ingesting toxic detergent hard. And that, dear friends, is why we love him. Please don’t ever leave us, big guy.