All Eyes Are on Beer-Throwing at the Patriots Victory Parade

After last year's mayhem, Boston officials are urging fans to give it a rest. 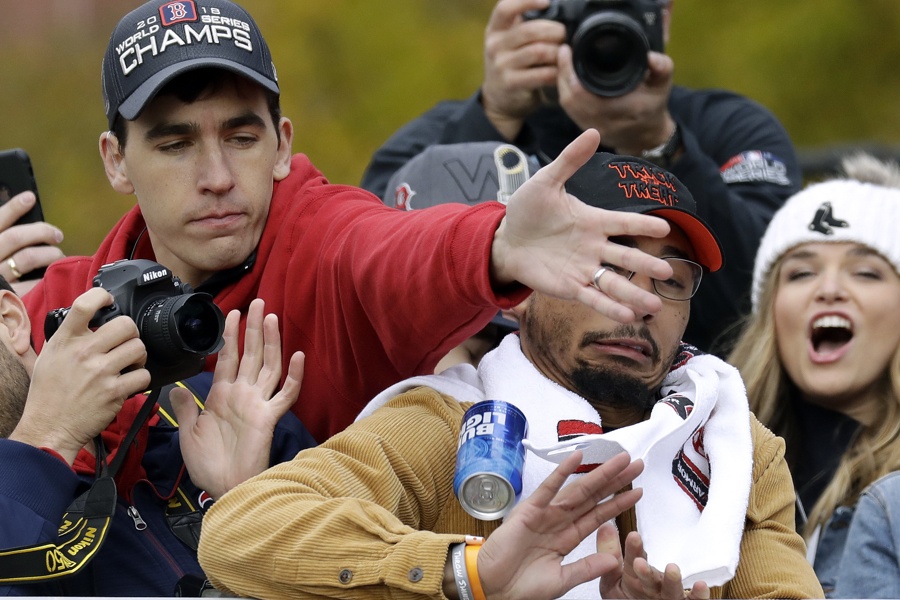 A Boston Red Sox staff member, left, tries to keep a tossed beer can from hitting Mookie Betts during a parade to celebrate the team’s World Series championship over the Los Angeles Dodgers, Wednesday, Oct. 31, 2018, in Boston. (AP Photo/Elise Amendola)

You can’t necessarily blame fans for doing it. After all, who wouldn’t want to crack a cold one with one of your heroes, especially in the warm afterglow of a championship victory. But this year, city officials are warning fans at the Patriots victory parade to give the relatively new tradition of beer-throwing a rest.

Boston Mayor Marty Walsh is responding to the mayhem of last fall with fresh warnings for revelers, and for good reason. Who can forget how overzealous fans hoping to toss cans of beer to the World Series-winning Red Sox ended up frightening poor Mookie Betts, beaning manager Alex Cora, and denting the freaking trophy?

“The Patriots are going to have their families with them. Watching the parade will be kids with their families, so we’re asking you do not throw things,” Walsh said in a pre-rally press conference. “Do no not throw beers do not throw anything at those boats we don’t want to see anyone get hurt.”

One fan in particular has learned how quickly the fun beer-soaked tradition can get serious after the rolling rally for the Sox. A 19-year-old from Sandwich faced charges for disorderly conduct, assault and battery by means of a dangerous weapon, and being a minor in possession of liquor after hurling the beer at Cora.

Police this year have also insisted that public drinking and marijuana-smoking will also not be tolerated—but, uh, good luck with that one. And Boston Police Commissioner William Gross pointed out that his officers, according to him, have had to take several minors to the hospital for alcohol-related issues at parades over the years. So he urged parents to keep an eye on their kids, and whatever substance that might be in their water bottle or Dunks cup.

Someone also threw an opened beer on Alex Cora and daughter. 🙄 pic.twitter.com/TbqDwFjOs1

Things could especially get hairy considering the unseasonably warm temperatures possibly in the low 60s, and the expectation from BPD and the T that we could see record crowds this year. Of course in that swarm of more than a million, there there will be some partying—Gronk in years past has said he has no choice but to join his people in celebration—so there will inevitably be some street drinking. And I guess a politely tossed brew never hurt anybody. But we’d probably all be a little better off if we kept the practice to a minimum this year. Will fans do that? We’ll have to see.