The QB's strange and beloved post-game cartoon is back. 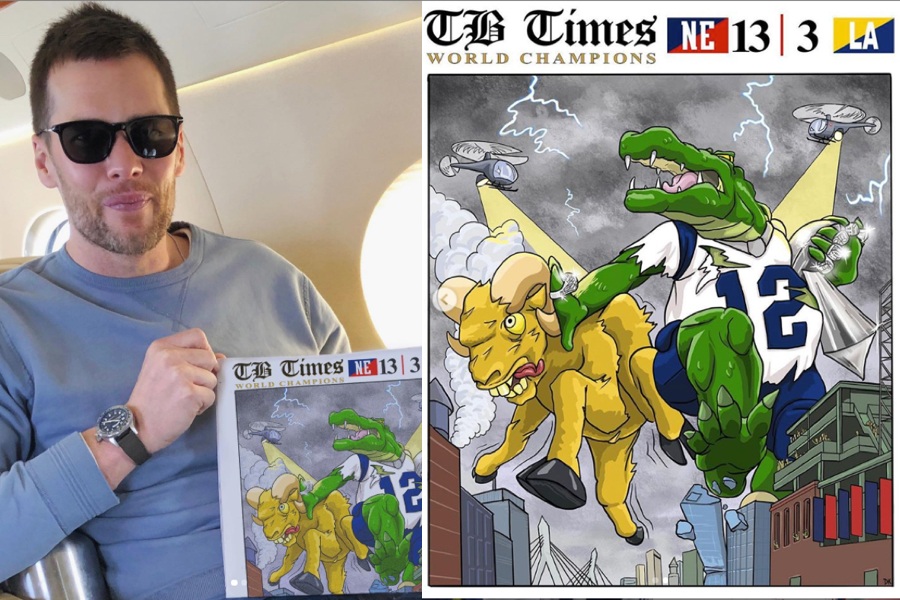 It’s back, baby! The TB Times, Tom Brady’s bizarre and beloved fictional Tom Brady-focused newspaper is back with another post-game cartoon.

In a photo posted to Instagram before Tuesday’s Patriots victory parade, Brady held up a copy of a Super Bowl edition of the paper. It features a cartoon version of himself as a giant Godzilla-like monster in a blue-and-white #12 jersey, clomping its way through Boston, while stiff-arming a giant ram, hoisting up a gleaming Lombardi Trophy and, of course, wearing six glistening Super Bowl rings. The cartoon shows helicopters chopping overhead as lightning crashes, and several Boston landmarks are visible, including the Zakim Bridge, the Hancock tower (which is buckling under the monster TB12’s feet), and Fenway Park.

The fictional front page includes the real-life score of the Pats victory over the Los Angeles rams, 13-3, as well as the words “WORLD CHAMPIONS.”

For those unfamiliar with it, the “newspaper” had become a tradition over the last two years, as Brady shared unusual drawings styled as the front page of the TB Times after every Patriots victory. They were weird and lovable all at once, just like the champion himself. And fans ate it up. But this is the first edition he’s shared with us this in a while, after the project abruptly went on on hiatus in September. Many of the TB Times‘ devotees feared we might never see another one. But now they  can officially put those fears to rest.