Haslet was struck by a car in Back Bay last month. 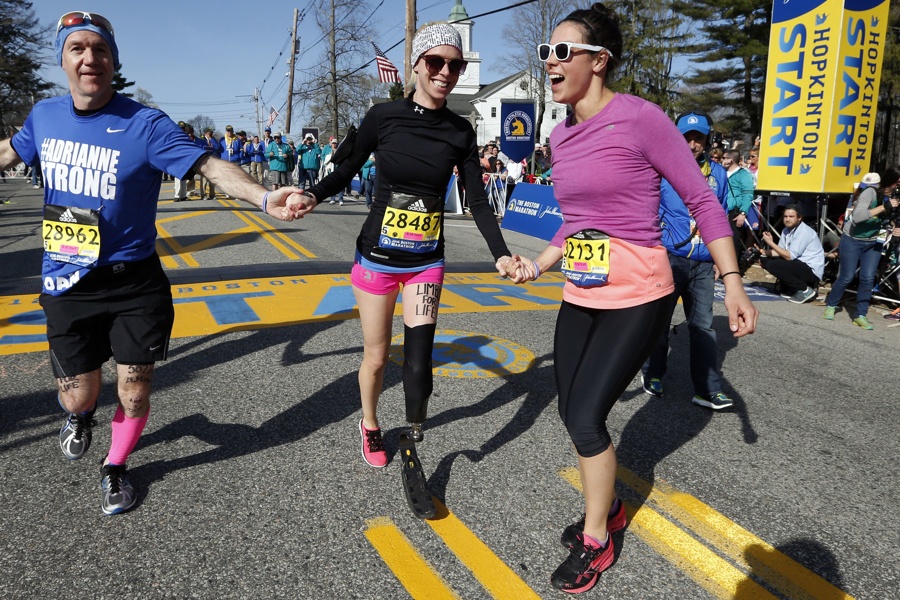 Adrianne Haslet has become a symbol of perseverance in Boston after surviving, and thriving, following the Marathon bombings in 2013. But injuries she sustained when she was struck by a car last month will prove too steep an obstacle to overcome this year.

In an interview with CBS, Haslet announced that she will not run the Boston Marathon in 2019, a race she’d been training for before a car ran into her while she was walking in Back Bay on January 5. Haslet spent several weeks in the hospital after the crash, after which she required multiple surgeries and physical therapy.

“It’s so hard, but I am physically—and mentally—but physically unable to do that,” she said Friday on CBS This Morning. “I have such little mobility in my arm, and it’s 65 days away today. And I talked with my coach and I talked with my surgeon, and I’m not running. And I’m not going to be able to train for that kind of distance,” she said, adding, “It’s impossibly hard to have that taken away from me.”

Haslet, who walks, runs, and dances with a prosthetic leg, was crossing a Commonwealth Avenue crosswalk on a rainy Saturday evening, when the driver of a car collided with her, throwing her “into the air” and “crushing the left side of my body.” At the time, it was unclear whether the incident would sideline her ambitions to run the marathon again. She first completed the race in 2016, three years following the attack on Boylston Street. She has also appeared on Dancing with the Stars, has taken on an advocacy role for amputees, and has justifiably been dubbed by Tom Brady as an “inspiration.”

“I had to completely redefine myself after losing my leg,” she said Friday. “And I know I can do that again after being hit by a car. Give yourself the time and you can do anything.”

You can watch her full segment on CBS here.

Tune in TOMORROW MORNING as I talk with @norahodonnell about resilience, life, and my future in running. Repost from @cbsthismorning – INSPIRING STORY OF RESILIENCE: @adriannehaslet lost part of her leg in the 2013 Boston Marathon bombing. Friday on @CBSThisMorning, she’ll share with @norahodonnell how she’s recovering after being hit by a car last month and reveal whether she’ll run this year’s marathon.