Elizabeth Warren: Trump May Be in Prison by 2020

At a rally, she said he "may not even be a free person" on Election Day. 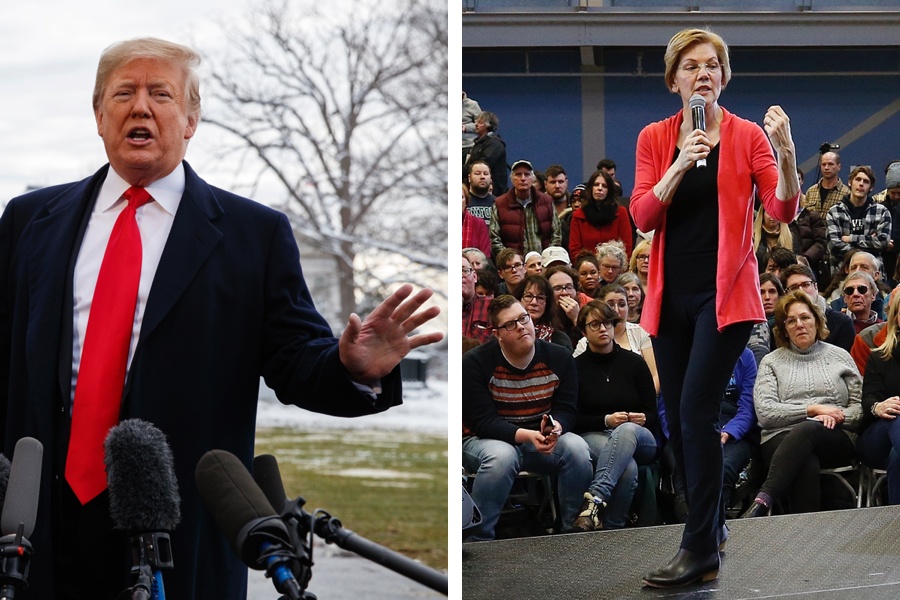 Elizabeth Warren has offered a lot to voters that isn’t focused on Trump or the investigations targeting him, like support for the Green New Deal and a plan for a wealth tax that has shaken billionaires. Which makes sense: For one, polling shows people like those things, and voters tend to like voting for people and ideas and not just against their opponents. But at an Iowa rally on Sunday, Warren offered another reason to stay focused on the issues instead of the Commander in Chief: He might not even be a factor by 2020, because he might be in prison.

“By the time we get to 2020, Donald Trump may not even be president. In fact, he may not even be a free person,” she said, suggesting the investigations that have haunted him could land him behind bars.

Warren later confirmed for reporters she was referring to the possible outcome of probes involving the president. “They’re everywhere and these are serious investigations, so we’ll see what happens,” she said, according to the New York Times. It’s not widely believed to be likely the president will end up in prison.

It was a step outside the norm for Warren, who has largely avoided talking about Trump’s various scandals or the possibility of impeachment. In fact, while making her point about Trump maybe being in prison, Warren was arguing against obsessing over “what Donald Trump does every day.

“Every day there is a racist tweet, a hateful tweet, something really dark and ugly,” she said. “And what are we as candidates, as activists, as the press, gonna do about that? We’re gonna chase after those every day? Are we gonna let him use those to divide us?”

This is how Elizabeth Warren opened up her “first full day” of her presidential campaign: “By the time we get to 2020, Donald Trump may not even be president. In fact, he may not even be a free person. But here’s how I see it–Donald Trump is not the only problem we’ve got.” pic.twitter.com/hhzFiKdaC5

The statements did in fact follow a weekend of some darkness and ugliness from the Oval Office, as Trump continued to use Native American insults to taunt Warren. A recent tweet included an apparent reference to the Trail of Tears, a shameful chapter in U.S. history that saw thousands of natives killed. Earlier tweets included a reference to the Wounded Knee Massacre. Trump’s son, Donald Trump Jr. also weighed in over the weekend, sharing a screenshot of a joke that mockingly referred to “Native American genocide” along with a caption reading, “Savage!”