The Rise of Socialism in Boston

All of a sudden, socialism is cool again. But is anyone actually interested in a revolution? 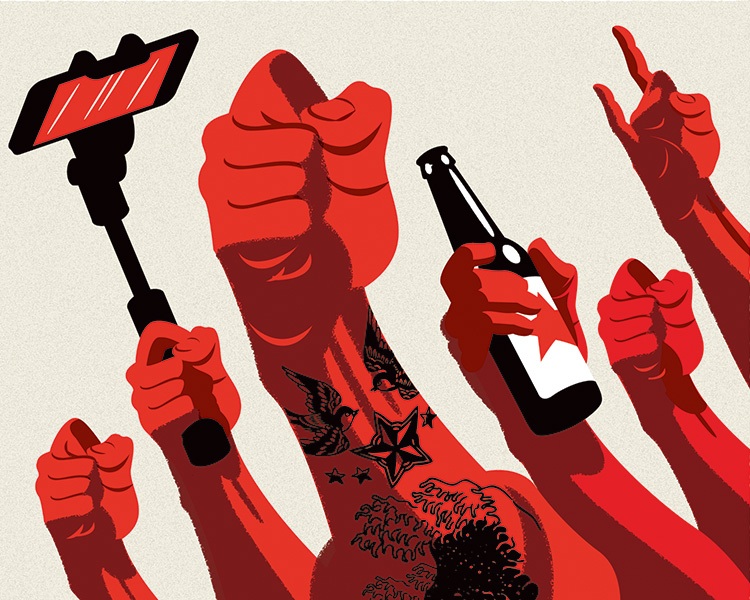 On an unseasonably warm December afternoon, about 100 people crowded together inside the windowless Boston Teachers Union headquarters in Dorchester. Clad in plastic-framed glasses, untucked button-downs, and more plaid than you’d find at a Highlands Festival, they looked like any other horde of mostly millennial and mostly white hipsters. With one big difference: They were there to plan the revolution.

It was the Boston chapter of the Democratic Socialists of America’s monthly general assembly, and from the start the event exuded a kind of mixer vibe. The room, filled with colorful balloons and round tables draped in blue tablecloths, was loud as card-carrying socialists wandered among working groups on immigration, eco-socialism, labor, and more. Longtime members smiled and waved at one another from across the room, mouths hanging open in exaggerated excitement, while newbies cautiously waited for others to approach them. It looked more like your grandmother’s retirement party than the looming end of capitalism, but looks can be deceiving. “This is an incredible opportunity to change the future of American politics,” Boston DSA cochair Beth Huang enthusiastically told me in an interview.

The word “socialism” may still be taboo in some circles, but chances are better than ever that you’ll hear it mentioned at your local grocery store or next cocktail party. A Gallup poll last summer reported that Democratic voters feel more positively about socialism than about capitalism, and membership in Boston DSA, the most prominent socialist organization in the city, has grown nearly 700 percent recently, from just 250 members before the 2016 presidential election to 1,700 today. Nationally, the DSA’s membership climbed from 5,000 to 55,000 during the same time period. Comrades range from avid Marxists to aging hippies, but most represent the young, revitalized left, rallying in the streets, barnstorming on Twitter, and demanding change.

In many ways, the election of Donald Trump deserves a lot of the credit for spurring the political movement of the moment. As do the lingering frustrations about what’s happened to the middle class since the Great Recession and the bank bailout; high healthcare, housing, and college costs; income inequality; and the government’s lack of action on, well, anything. There’s disillusionment with the Democratic Party generally, and the Obama administration specifically. (If they’re the good guys, after all, then why did so many bad things happen on their watch?) Newly elected New York Representative Alexandria Ocasio-Cortez, who is pals with freshman congresswoman and hometown favorite Ayanna Pressley, has also added fuel to the fire.

Here in Massachusetts, the movement is having one of its biggest moments in decades: New DSA chapters have launched on the North Shore and in Worcester, while students at Boston University, Emerson College, and Harvard have all started official socialist clubs in the past few years. Even the protest on Boston Common the day after Trump’s election, which drew thousands, was a socialist-organized event. Suddenly, it seems, being red is cool again, and increasingly people want in. But can Boston’s socialists really make a political mark on a city that’s already so far to the left?

Despite socialism’s ascendant status, socialists themselves can be surprisingly elusive. Over several weeks, comrades told me about meetings that I was welcome to attend—really, they’d love to have me—but as a citizen, not a writer. One night, a meeting was canceled at the last minute, so everyone who showed up decided to grab a drink—and went out of their way not to invite me. One woman mentioned something about “attempted infiltrators.” To be fair, you can never be sure about someone’s motives.

This distrust is rooted in the past as well as the present. George Katsiaficas, a former Wentworth Institute of Technology professor and activist who cofounded the Red Book Store in Cambridge some 50 years ago (now the Lucy Parsons Center in Jamaica Plain), remembers crusading against capitalists and the Vietnam War in the early 1970s. It was an era when he was firebombed, arrested, and placed on the FBI’s high-priority tracking list. (“Don’t ask me how I got that great honor,” he says sardonically.) Katsiaficas remains a committed activist; he and his self-dubbed “Geezers Group” are still protesting and showing young comrades the ropes, but there are several clear differences between being a socialist today and in previous decades.

The first distinction, says Gerald Friedman, a professor of economics at UMass Amherst, is that the powers that be aren’t as threatened by major social movements and “pressure from the left” today as they once were. Many traditional bastions of progressive power, such as unions, he says, have been kneecapped and no longer have the ability to stop the gears of industry and force employers to the table. And second, among younger people, socialism’s Cold War stigma is a distant memory, if a memory at all. “If you figure nobody under 10 was paying attention [when the Soviet Union collapsed in 1991],” Friedman says, “then basically no one under 40 really associates socialism with the Union of Soviet Socialist Republics.” With these pressures and pitfalls disappearing, comrades feel they’ve found an opportunity to build their movement. Still, Friedman remains skeptical that today’s push is really about class warfare and not simply a fad, calling the sudden appeal of socialism a “knee-jerk reaction that translates to: I don’t like what’s going on right now.”

Here in Boston, it’s easy to understand why socialism has become fashionable—the city is in the thrall of high capitalism and experiencing one of the largest wealth gaps between the haves and the have-nots in the nation. Luxury towers are going up everywhere, Kendall Square is dominated by tech giants and startups, and housing costs are soaring, whether you rent or buy. Enter the comrades, eager to reorient the way we run the world.

As it turns out, socialists from Boston DSA, Harvard International Socialists, and the Boston branches of the International Socialist Organization and Socialist Alternative, most of whom know their ideology, would likely scoff at Friedman’s skepticism: They want to make it perfectly clear that they do desire actual socialism. Members occasionally clash—the socialist movement is hardly a blob of revolutionary consensus—but agree that our nation’s problems, from housing to global warming to racism, are related and that the common denominator is a capitalist system that values profits over people. The singular answer: It must be brought down. But how?

If you’re looking for specifics on what a post-revolution world might look like, you’re not likely to find them at a Boston DSA meeting. In December, the topic came up plenty—how to “fight the many-headed beast of capitalism” was a subject of hot debate—but more details were provided about the number of Evans in the group (“There’s like 30 Evans,” one quipped, eliciting knowing chuckles) than about the insurgency. The penchant for the abstract could be found at a Thursday-night event on migrant caravans hosted by the Boston branch of the International Socialist Organization and Harvard International Socialists, where about 40 comrades sat in wooden chairs in a midsize, stadium-style classroom at Harvard. Attendees were engaged enough, clapping their appreciation at calls to take down the system, but there were also plenty of millennials with affinities for flannel, chunky scarves, and cords slumped low in their seats.

When the floor opened for discussion, members spoke in the order they raised their hands, making for a dialogue that was less like a conversation and more like scrolling through random socialist Twitter posts.

“The working class of America has more in common with the refugees in the caravan than they do with the ruling class,” said one comrade.

“Does anyone know how the migrant caravans are formed?” wondered another.

“The labor movement was built by immigrants.”

“The immigration reform protests in 2006 failed because we waited for the Democratic Party.”

“In response to the man who asked how the caravans are formed a while ago…oh, is he not here anymore?”

“No one’s going to save us. We have to save ourselves.”

When it came to how to accomplish this, exactly, the waters quickly grew murky. I posed variations of this question to many members, including the president of the Harvard International Socialists, Comrade Andy, who asked me not to use his full name. He agreed that it’s funny for a socialist club to have a president but took the post because it’s a requirement to be an official club at Harvard. (Oh, capitalist bureaucracy!) Andy, who speaks in winding sentences that often turn toward platitudes, told me, “We believe that another world is possible in which people are able to take care of themselves without private property.” Okay, but how would something like, say, a hospital work? We went back and forth like this for nearly an hour before he politely informed me that I was very much missing the point. “You have to imagine,” he said, “what it would be like to be in a society in which everyone has the same amount of democratic power to decide what a hospital looks like.” It’s hard not to wonder whether the revolution requires more imagining than I’m probably up for.

That’s not to say socialists aren’t making an impact. Huang says Boston DSA is “super excited” to launch clinics that help people alleviate medical debt and navigate confusing insurance policies as part of a larger effort to raise awareness of the Medicare for All movement. The group is also buckling down on a campaign to make public utility companies actually public, in the wake of National Grid’s months-long lockout of union workers. On a grander scale, the swell of comrades is changing the way we all talk and think about politics by putting local and national leaders on notice and getting issues such as the Green New Deal on the agenda.

To many, the impact smacks of the Occupy Wall Street Movement. “In some sense, Occupy changed everything, and in another sense it changed absolutely nothing,” says Elan Axelbank, the Boston citywide organizer for Socialist Alternative, noting that the late-aughts movement reframed the nationwide discussion on class as the one percent and 99 percent became household language, but it had no concrete policy demands or accomplishments. It also provided a sense of community and a welcome place for members to rail against the leaders who ignore them and refuse to lend them a hand. The same, I think, might be said for the comrades.

In fairness, though, breaking free from capitalism is a pretty tall order, even tougher than wresting free college and universal healthcare from the congressional GOP’s Ayn Rand book club or getting Wall Street Democrats to back a 70 percent marginal tax rate. Even the revolution needs to make a buck here and there. As I wrapped up my reporting, I couldn’t help but think back to that December DSA meeting—with its friendly meet-and-greet vibe—where members hawked branded T-shirts ($20) and tote bags ($12) at a table in the back of the room. Turns out, if you want to be part of Boston’s coolest new club—even if it’s jam-packed with socialists—it’ll cost you.

Note: The DSA T-shirts and tote bags mentioned in this article are not required for membership, which is free.