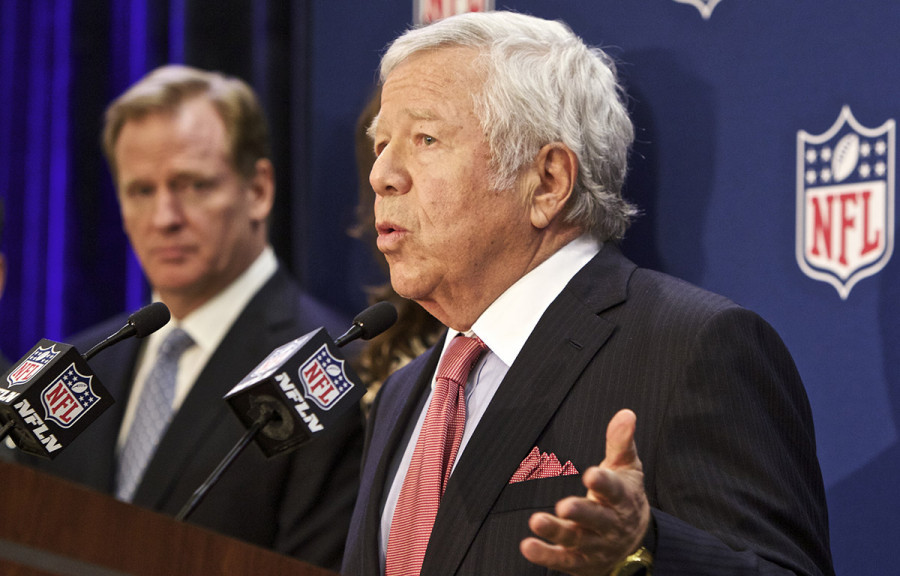 Billionaire Patriots owner Robert Kraft has been caught in a Florida prostitution sting and a warrant has been issued for his arrest, officials in that state announced Friday.

Kraft, 77, was reportedly among nearly 200 suspects identified at the conclusion of a major investigation into spas in the Palm Beach area that were allegedly fronts for prostitution operations. Officials allege that Kraft, who has a home in Palm Beach, was driven by a chauffeur to a spa in Jupiter, Florida to solicit sex with a prostitute on at least two occasions about a month ago. He faces two solicitation charges.

Officials said in a press conference that there is video evidence for each of the suspects.

Kraft has denied the allegations. “We categorically deny that Mr. Kraft engaged in any illegal activity,” a spokesman said in a statement reported by the Globe. “Because it is a judicial matter, we will not be commenting further.”

The NFL has also responded, saying that it “is aware of the ongoing law enforcement matter and will continue to monitor developments.”

The Orchids of Asia Day Spa, which Kraft allegedly visited, charged $59 for a half hour and $79 for an hour, a Florida detective told reporters, according to Reuters. It reportedly had also appeared on websites indicating that employees at the spa performed sex acts for clients.

Martin County Sheriff William Snyder earlier this week suggested the results of the investigation would be huge. “The tentacles of this go from here to New York to China, in Florida from here to Orange County,” he said. Snyder added at the time that, “There will be a newsmaker in this one.” Now we know who it is.

#Breaking Florida officials confirm @Patriots owner #RobertKraft is one of dozens of men identified in a months-long investigation into a human trafficking and prostitution ring https://t.co/5o4DBvugO0 pic.twitter.com/RACLjWFXtO