The Portland Trail Blazers Were Stuck in an Emerson Elevator

"This is not how you treat a former number one team in the west." 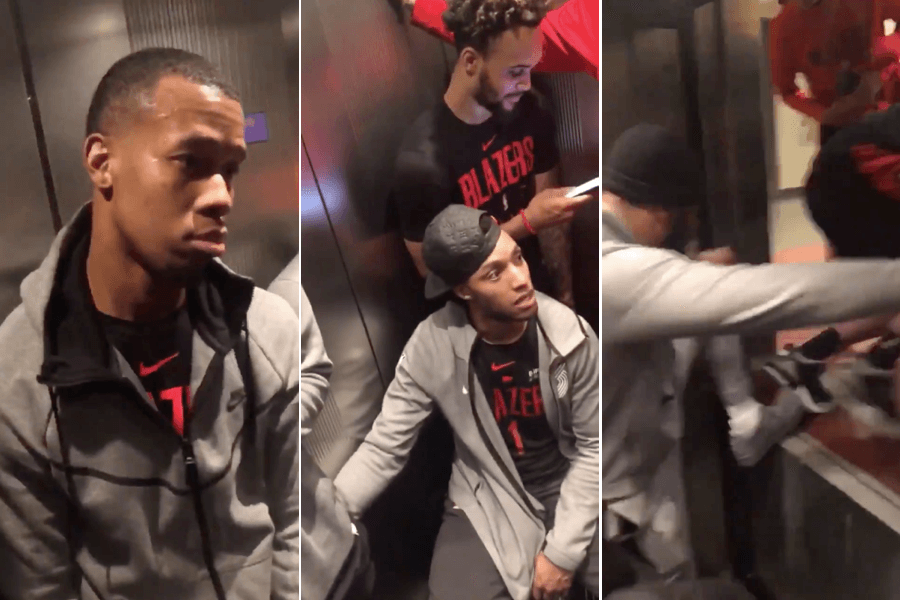 The Portland Trail Blazers have had some, uh, ups and downs so far on their trip to Boston. Members of the team were apparently stuck inside an elevator at Emerson College today.

Players Enes Kanter and Meyers Leonard each shared videos of the ordeal on social media. It did not look comfortable in there. The players jokingly fought over the few snacks they happened to have with them, complained about how hot it was getting inside the metal box, and said something, half-kidding, about entering “survival mode.”

“This is not how you treat a former number one team in the west,” star Evan Turner can be heard saying at one point.

Stuck in the elevator with the squad ‍♂️ @trailblazers pic.twitter.com/2Yu5zrdFfH

Videos also show their ultimate rescue, as a maintenance worker was apparently able to get the doors open. The clips show the elevator was stuck between levels in the Emerson building, meaning the players had to climb onto a floor that was about waist high. As they exit, a small crowd can be seen cheering them on. No one was injured.

The players said in their videos that they spent a half hour trapped in the elevator, but in a statement, Emerson College said they were in there for about 15 minutes.

“This afternoon, an elevator at 150 Boylston Street owned by Emerson College stopped between two floors and delayed members of the Portland Trail Blazers from reaching the street level for about 15 minutes,” the college wrote in a statement. “No one was injured in the incident. The College apologizes for the disruption and hopes the team takes it easy on the Boston Celtics tomorrow night.”

The Trail Blazers play the Celtics on Wednesday night and, according to a team spokesman, had been practicing at Emerson’s NCAA gym before their fateful ride.

In the wake of the rescue, the team was poking fun at the incident on Twitter.

And later, the team and the college cleared the air, with the Trail Blazers offering a digital fist bump on Twitter. Emerson also had some advice for the Celtics: “We recommend you take the stairs next time you’re in Portland.”

Thank you for understanding @trailblazers. Note to @celtics — we recommend you take stairs next time you’re in Portland. https://t.co/WyZ6llOoOJ