Is Boston’s Transportation Crisis Beyond Repair?

Enough with trying to fix our roads, buses, and trains. If we ever want to get around in this town, it’s time to radically change the way we travel. 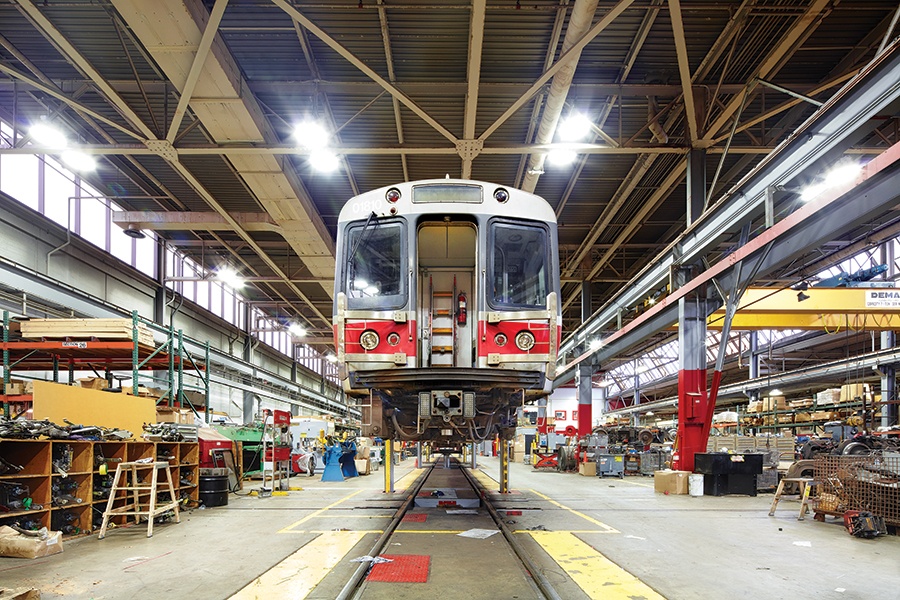 A Red Line train in its natural element: the shop. / Photo by Jared Kuzia

Getting around Boston has never been more of a pain in the ass. Between the city’s booming population and its cratering unemployment rate, some 150,000 new commuters are using the same streets, trains, and buses that have improved only incrementally since 2010. Now the really bad news: The suffering has only begun. For the MBTA’s network to be fully repaired and modernized, riders will have to endure another decade or more of station closures and shuttle buses. Gas guzzlers won’t get off any easier, with the $1.1 billion plan to replace the viaduct that lofts the Mass. Pike over Allston poised to induce fist-shaking gridlock for what will probably feel like forever. As Harvard Kennedy School public-policy scholar Linda Bilmes puts it, our “whole transportation system is a fire in the attic—a fire in the whole house.”

So how do we put it out? The state is slowly extending the Green Line, replacing trains, and overhauling dangerously decrepit bridges; meanwhile, municipalities are piloting exclusive bus lanes. But according to Stacy Thompson, executive director of the advocacy group LivableStreets Alliance, “We can’t just do the big project that will be completed a decade from now, and we can’t just do the low-hanging fruit.” Part of what’s missing is a visionary plan to dramatically improve the infrastructure that’s already here. Take the commuter rail, for instance. Long the domain of white-collar suburbanites, the nonprofit group TransitMatters believes the network could be transformed into a regional rail system featuring electrified trains and service every 15 to 30 minutes for around $2 to $3 billion. That ain’t chump change, but as Bilmes points out, “It’s not free to do nothing,” either. As is, the cost for the system’s present inadequacy falls disproportionately on the people of color being priced out of Boston and Cambridge: One Metropolitan Area Planning Council (MAPC) report found minorities typically spend more time and money commuting than their white colleagues.

Revamping the MBTA is vital to achieving transportation equity in Boston, but according to MAPC transportation director Eric Bourassa, hopes that bus and train improvements will also relieve traffic are probably misplaced. “Even if we take a few people out of their cars,” Bourassa says, once others notice that the streets are unclogging, “now they’re gonna drive.” Given this “backfilling” effect, even a huge expansion of  T service—say, the long-fabled North–South Rail Link or a Blue Line running from Lynn to Longwood, as was recently floated by MassDOT—might not persuade the majority of Bostonians to ditch their cars. Our only hope, then, is to think radically differently and take a leap of faith into the future.

Luckily, we don’t lack for creative ideas. Back in 2015, for instance, Emil Jacob, then a Boston Architectural College grad student, proposed running lightweight, energy-efficient trains over Boston’s streets. Each car of his “cTrain” (short for “caterpillar train” because of its long, low-profile design) would seat around 20 people and use passengers’ stop requests to manage train-traffic volume. A cTrain network would have the same advantages as the autonomous vehicles your brogrammer cousin keeps yammering about, but could be operated as a public utility and wouldn’t run the risk of making the city’s hay-fever-level congestion even worse.

The notion of sleek, carbon-neutral cTrains whizzing above Congress Street may seem far-fetched, but Jacob’s design is more Back to the Future than science fiction. As the Globe recently pointed out, a Cambridge inventor during the late 1800s proposed replacing the city’s out-of-date streetcars with an overhead monorail. His dream never got off the ground, but in recent years policymakers and developers have begun looking skyward again, with ideas such as a gondola in the Seaport and a plan from the private firm Transit X to run personal pods on elevated rails. Conventional fixes and service expansion will be necessary to meet the urgent need in the region for transit equity. But imagining a mid-21st-century Boston where traffic is light and rapid transit is plentiful will require a more dramatic shakeup. We’ve already looked at our streets and under them. Now it’s time to tilt our vision up and set our sights on building the city of tomorrow.