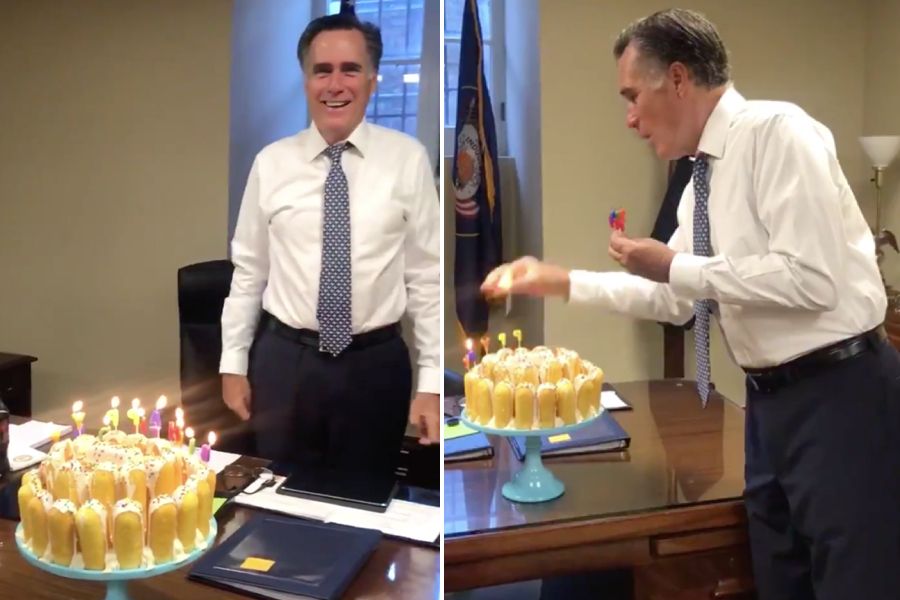 Mitt Romney, the Utah Senator, former Massachusetts governor, and 100 percent regular guy, celebrated his 72nd birthday on Tuesday. We know this because video of him receiving a celebratory bouquet of Twinkies with candles stuck in them appeared via his Twitter account earlier this morning. Happy birthday, Mitt Romney.

You of course don’t really need to know this, and we here at Boston don’t spend a ton of time tipping you off about what Mitt is up to in Washington these days.

But, uh, trust me, you really need to see this.

My team surprised me with a cake made out of my favorite snack—twinkies! Looking forward to all this year has in store. pic.twitter.com/lQfyIrQ9Qe

The video of Romney’s birthday celebration starts off normal enough. A staffer arrives with a platter of the treats—a quirky substitute for cake, sure, but otherwise nothing to see here—and his team is all smiles as he accepts the dessert, and everyone records the ceremony on their smartphones. “What I’ve always wanted!” he exclaims. Things go rapidly off the rails from there.

Romney, video evidence shows, beholds the Twinkie array and the lit candles, and then, instead of blowing them out the way the rest of humankind handles such situations, he instead picks them up one by one and begins individually snuffing out the flames with tiny puffs of air.

If you have literally even once seen another person do this particular move, please let me know. Because I have not, and I don’t really know how to feel about it.

I’m not alone. Plenty noticed the odd series of events and shared their views on them on social media.

Mitt Romney seems 95% sure this is how earthlings are supposed to blow out their birthday candles. pic.twitter.com/6KD5SzzOYU

We are aware of, and looking into, the Mitt Romney candle incident.

Others, meanwhile, lauded his technique as more hygienic.

I hate a million things about Mitt Romney but I’m totally into how he blows out candles. Last thing I want is your spitty mouth covering a cake.

he’s doing that so he doesn’t get his spit all over the cake because everyone in the office is going to eat it. I cant believe I’m defending mitt romney’s candle blowing antics. but here we are. my current job has truly broken me https://t.co/bnMgz9y57c

I see people patting Mitt Romney on the back for taking candles out of his birthday cake one by one and blowing on them because it’s “more hygienic.” Wrong! He still slobbers all over the cake. pic.twitter.com/ETtQhUmHox

Why Twinkies in the first place? Romney, a man who also famously enjoys a good American serving of hot dog meat, described them in the tweet as his “favorite snack.” Romney has also spoken publicly about Twinkies in the past, including in comments at a Utah rally, which were included in a CNN report in January. Noting that the treats were being served at the event, he reportedly said, “That’s right. Those were built about two and a half years ago, but I’m told they’re still good,” adding, when the crowd seemed to enjoy his off-the-cuff comments, “There is nothing about a Hostess Twinkie that has ever seen the inside of a cow.”

Update: TMZ has done the people’s work and ambushed Mitt Romney to grill him on the candle issue. His story? He wanted to save his staff from germs, and also enjoyed some extra wishes as a result of his blowing technique. So that settles it. Or does it.

🚨🚨🚨🚨🚨
Mystery Solved:
“I have a bit of a cold and I didn’t want to spray my germs all over the Twinkies for everyone else to eat. And I also joked that with each candle I got another wish. So it was a twofer!”
— @MittRomney https://t.co/7hYOzWalx2