Someone Tried to Drive an Absolutely Wrecked Car into Boston

Boxborough Police shared a photo of the clearly destroyed car still on the road. 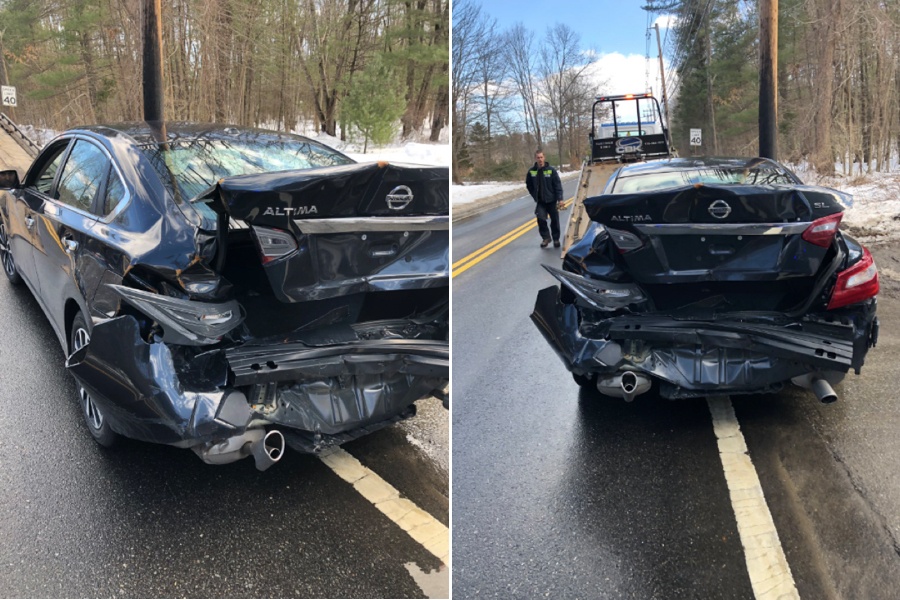 Wildly overconfident motorists of Massachusetts hoping to top this one, you have your work cut out for you.

Boxborough Police this week are sharing photos of a car with an impressively damaged, smashed soda can-looking rear end, the driver of which apparently “thought it would be okay to drive to Boston,” police wrote in a tweet Tuesday.

According to a police report, after receiving several calls about the car, officers pulled the clearly obliterated Nissan Altima over at around 2:20 p.m. Monday on Mass. Ave., headed east. The driver, who they are not identifying but who they said is from Georgia, was cited for operating a vehicle that did not meet safety standards.

That is, of course, one hell of an understatement.

“This is obviously a vehicle that is not safe to be on the road,” Boxborough Police Lt. Warren O’Brien tells me. “It’s just clearly a mobile safety violation on every level.”

The license plate? Gone. Tail lights? Smashed to pieces. The gas tank? Possibly ruptured, posing a fire hazard. Loose pipes dangling off the back end? You bet. The thing’s backside is concave.

Boxborough, it’s worth pointing out, is a good 30 miles away from Boston. So things could have ended badly. In all likelihood, the driver was planning on steering his onto Route 2 or potentially the Mass Pike.

Police do not know for certain how the damage was sustained, but say the man told them he had been involved in an accident the night before somewhere outside the town. He is not facing criminal charges and the matter is not under investigation, at least not by the local police. But questions remain.

“To be honest with you I am very surprised that this car was allowed to be driven after a motor vehicle crash,” O’Brien says. “I don’t know where it happened or whether he went to a tow yard and they allowed him to drive it away. But that shouldn’t have happened.”

His advice for the rest of us?

“Use common sense,” he says. “Clearly this individual didn’t.”