The controversial fighter made a splash this weekend. 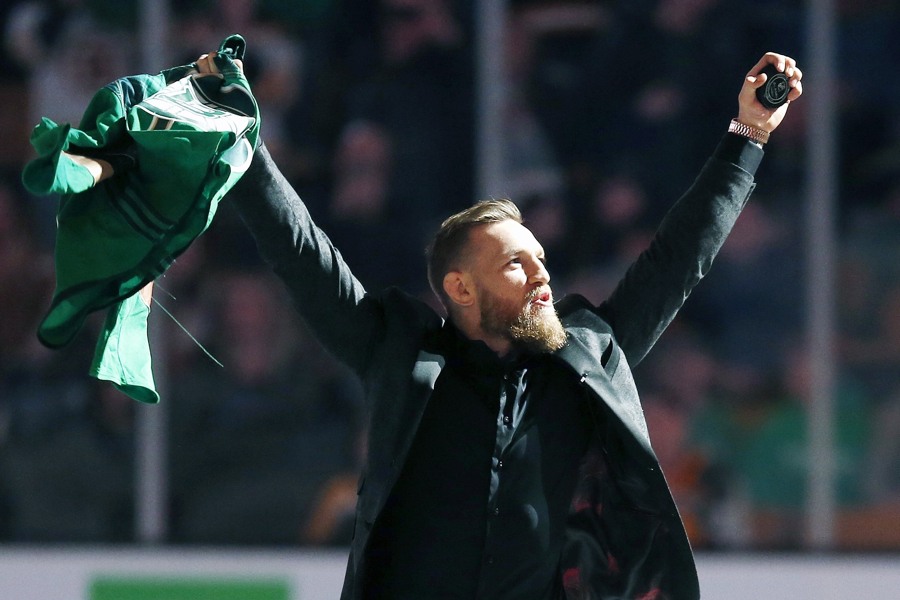 Conor McGregor clearly made a splash in Boston this weekend.

The controversial Irish fighter, here to celebrate St. Patrick’s Day, had a high-profile tour of the city that included a visit to the Bruins’ locker room Saturday night to give the team a fiery pep talk.

The next day McGregor and his family, riding in a car with the logo for his whiskey company, joined marchers in South Boston’s St. Patrick’s Day parade. Video the star shared on Instagram and Twitter shows him leaning out its window, grinning and waving at the day-drunk crowds, and climbing up through its sun-roof to throw branded hats along the route.

And that’s where things apparently got a little out of hand. State Sen. Nick Collins tells the Boston Herald that fans eager to get close to McGregor pushed past barricades to swarm the car, leading police to “dismiss” the MMA star from the parade with a police escort. Collins also called the decision to add McGregor to the parade “a mistake” due to the disturbance his presence apparently caused.

Video shared by McGregor offers a taste of what it looked like on the ground. “They’re coming right into the street,” he can be seen saying excitedly to the camera, as the clip cuts to footage of fans pushing toward the car. “They can’t contain it!” He then laughs maniacally.

Police did not confirm Collins’ description of events Monday morning, but a spokesman for the department says there were no arrests or police reports linked to McGregor’s appearance. In all, in a crowd estimated to be about a million strong, there were three arrests, and 128 citations for public drinking along the parade route. A BPD spokesman referred further questions about McGregor to the parade’s organizers, the South Boston Allied War Veterans Council, which did not immediately respond to an interview request.

Whatever exactly went down, McGregor appears to have had a good time. “The perfect ending to the wildest Paddy’s week I have ever had in my life!” he wrote on Instagram. “We have met some amazing and inspiring people on this trip and will cherish these memories for a lifetime!”

St. Patrick’s day parade today in Boston, Massachusetts! The perfect ending to the wildest Paddy’s week I have ever had in my life! We have met some amazing and inspiring people on this trip and will cherish these memories for a lifetime! A Proper St. Patrick’s week ☘️ Thank you all from @properwhiskey @augustmcgregor @mcgregorfast @mcgregorproductions