She and other Dem candidates pushed for a speedy release. 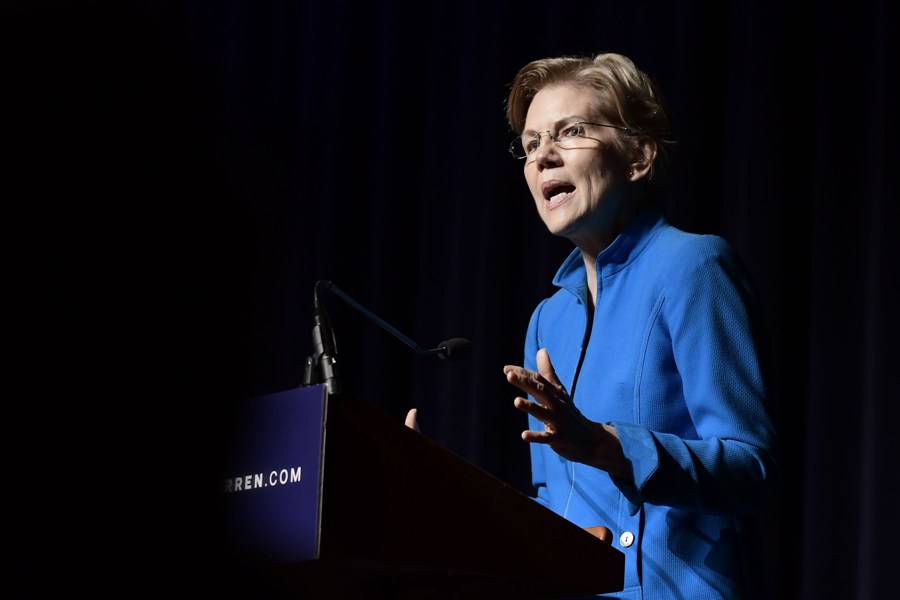 Elizabeth Warren, United States senator from Massachusetts and one of the many Democrats running for president in 2020, speaks at the “Community Conversation about Puerto Rico and its Recovery” held at the Alejandro Tapia y Rivera Theater, in San Juan, Puerto Rico, Tuesday Jan. 22, 2019. Warren addressed the hardships Puerto Rico has endured in the past two years, particularly its debt crisis and the recovery in the aftermath of Hurricane Maria. (AP Photo/Carlos Giusti)

Elizabeth Warren wasted no time calling for its immediate release after news broke late Friday afternoon that special counsel Robert Mueller’s report has finally made its way to the Department of Justice. In a tweet, the Massachusetts Senator and presidential hopeful called for the highly anticipated findings to be made public, “Now.”

“The American people deserve the full report,” she said in a follow-up tweet, which also invited followers to sign a petition.

Attorney General William Barr told lawmakers Friday that special counsel Robert Mueller has sent his office the findings of his probe into Russian interference in the 2016 election and obstruction of justice. Barr will now decide how much of the report to tell us about and when. In his letter to Congress, he said he would provide a summary of the findings “as soon as this weekend.”

Warren has made similar statements recently, as the nation braced for the report’s release. At a CNN town hall on Monday, she called for protecting Mueller’s investigation and releasing his findings.

So we have a report that is due from the special prosecutor any day now. Understand that that investigation from Mr. Mueller has produced already — I believe it’s 34 indictments or guilty pleas. This is a serious investigation. We need to protect him in finishing that report, and then that report needs to be made public to the American people. When we get it, we will know what to do with it.”

The White House issued this statement about the news: “The next steps are up to Attorney General Barr, and we look forward to the process taking its course. The White House has not received or been briefed on the Special Counsel’s report.”

President Trump himself has called for its release. “Let it come out, let people see it,” he said Wednesday. “Let’s see whether or not it’s legit.”

Other Dems in the 2020 conversation made similar calls for a speedy release, including Cory Booker and Kirsten Gillibrand.

This report should be made public immediately. https://t.co/Q2JCExqYaA

Special counsel Mueller’s report should be made public without any delay. The American people have a right to know its findings.

Also on Friday, Vermont Sen. Bernie Sanders called for the report to be made public “as soon as possible,” and Massachusetts Congressman Seth Moulton called for “making sure that every American gets to read every word.”

As Donald Trump said, “Let it come out.” I call on the Trump administration to make Special Counsel Mueller’s full report public as soon as possible. No one, including the president, is above the law.

Robert Mueller has done his job, now it’s time for Congress to do ours.

That means investigating this report ourselves, and making sure that every American gets to read every word.