The mayor spoke up about the former vice president after Biden was accused of inappropriately touching women. 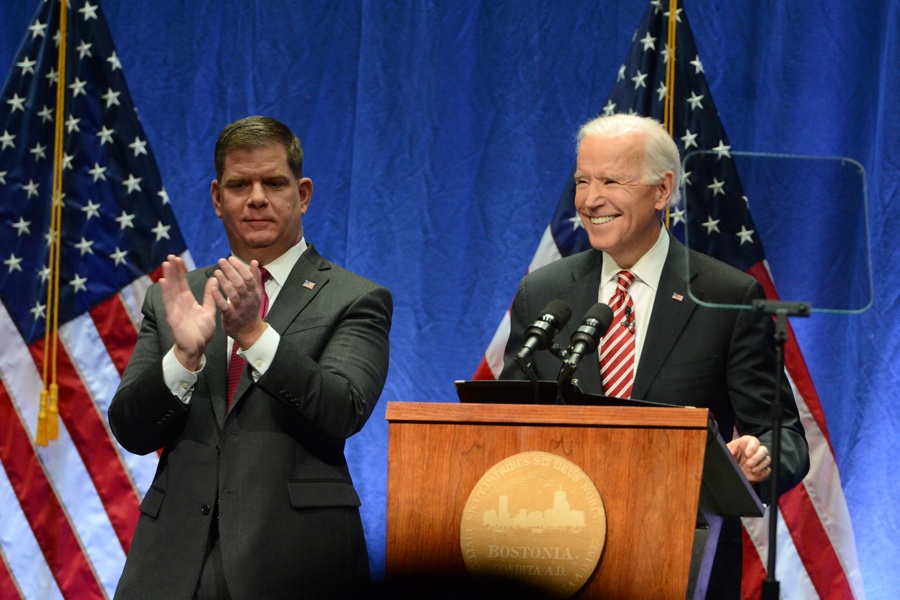 Pointing to what he knows about the “very emotional” former vice president, and lamenting what he described as a “tough world right now,” Boston Mayor Marty Walsh on Monday responded to allegations that Joe Biden inappropriately touched a woman.

“I think the vice president is pretty clear on his statement that he respects everybody and he respects women,” Walsh told reporters after an event in Brighton. “First and foremost it’s important that we all understand and respect women and respect everyone’s rights.”

“That aside, Vice President Biden, he’s a very emotional person,” he added, a trait Walsh says he saw when the vice president traveled to Boston to commemorate the one-year anniversary of the marathon bombings.

Walsh added, “We live in a tough world right now, to be honest with you.”

Biden is facing allegations he once touched a female politician’s shoulders, smelled her hair, and kissed her on the back of the head in a way that made her feel uncomfortable. Lucy Flores, who was then running for lieutenant governor of Nevada, made the accusations in the New York magazine site The Cut:

I had never experienced anything so blatantly inappropriate and unnerving before. Biden was the second-most powerful man in the country and, arguably, one of the most powerful men in the world. He was there to promote me as the right person for the lieutenant governor job. Instead, he made me feel uneasy, gross, and confused. The vice-president of the United States of America had just touched me in an intimate way reserved for close friends, family, or romantic partners — and I felt powerless to do anything about it.

Biden has said he does not believe he acted inappropriately. “In my many years on the campaign trail and in public life, I have offered countless handshakes, hugs, expressions of affection, support and comfort,” he said in a statement Sunday. “And not once – never – did I believe I acted inappropriately. If it is suggested I did so, I will listen respectfully. But it was never my intention.”

Statement from @JoeBiden this morning. pic.twitter.com/EbCchX2npU

Walsh and Biden are well-documented allies. The mayor has been public about his fondness for Biden as a possible Trump challenger, the two were photographed getting ice cream and seafood together in Boston in 2017, and Biden last year presided over Walsh’s second inauguration.

Sen. Elizabeth Warren, who may well end up competing with Biden for the Democratic nomination in 2020, also weighed in on the issue over the weekend. She says she believes Flores and that Biden “needs to give an answer” about the allegations, although she declined to say whether Biden should run, as it’s assumed he will. “That’s for Joe Biden to decide,” she says.

Sen. Ed Markey, a supporter of Warren’s 2020 bid, has also addressed the allegations and says he believes Flores. “I think she has a right to speak her truth. I think it’s important for women to demand that they be respected. I think it’s critical for all of us to give her that respect and to make sure that across our society, that we reduce dramatically as each day, week and year goes by the ways in which women are, in fact, disrespected,” he said Monday, according to the State House News Service. On Biden’s possible run for president, Markey said, “I think that’s a decision which Joe Biden is going to have to make, and then it’s a decision which the voters of the United States are going to have to make, weighing his conduct.”