Say goodbye to three of them in Massachusetts. 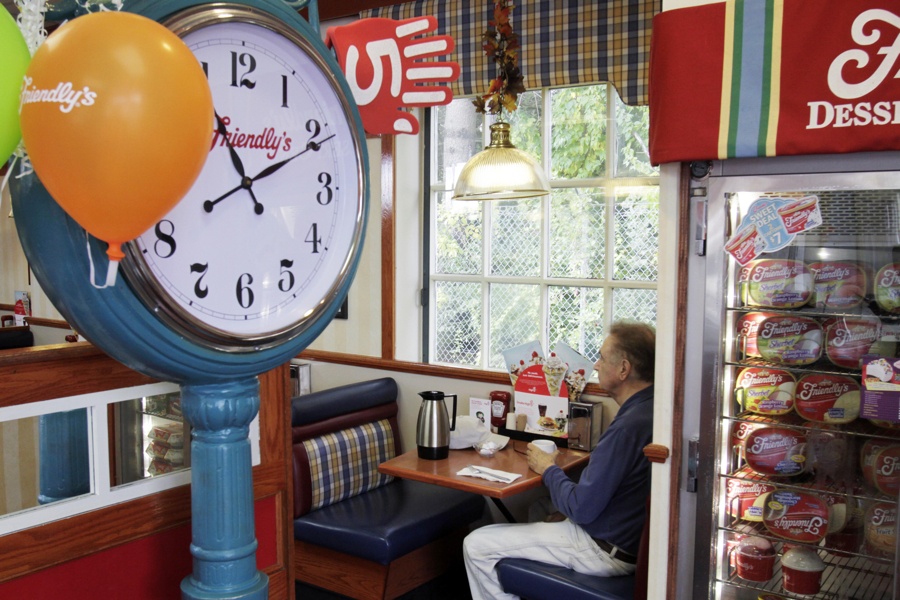 Friendly’s in Brunswick, Maine on Wednesday Oct. 5, 2011 via AP/Pat Wellenbach

Getting a simple Fribble just keeps getting harder around these parts.

Friendly’s announced its decision to close 23 corporate-owned locations in the Northeast Monday. “While this was a tough decision, we are confident it will best position the brand for a bright future,” said CEO George Michel in a letter to franchisees.

In Massachusetts, Waltham, Framingham, and Holden will soon be Friendly’s-free. Fourteen are also closing in New York, three in Connecticut, two in New Hampshire, and the last in Maine.

Customers and employees who showed up to the Framingham Friendly's on Sunday found a sign on the door saying the location had abruptly closed #friendlys #business #closed #restaurants pic.twitter.com/uTXiMJtHJC

Friendly’s, started as just one scoop shop in Springfield, is still based in Massachusetts, but has obviously expanded a little since then. After this wave of closures, they still have 77 corporate-owned locations — not to mention the 97 run by franchisees.

The chain has been closing down locations by the dozen in recent years. In the 80s, or as Friendly’s (probably) calls them, the Golden Years, they boasted 700 locations around the region.

But bankruptcy hit in the 21st century, whittling their empire down to just 254 restaurants in 2012. Now, closures have become the new normal, at least for those locations that are still owned by the company itself, which was sold to Dean Foods Company in 2016 for $155 million. That’s a lot of Fribbles.

Sign coming down at the @Friendlys on Maple in #Amherst. 23 corporate-owned restaurants have been closed. 14 in Upstate NY, 3 in Massachusetts, 3 in Connecticut, 2 in New Hampshire and 1 in Maine. pic.twitter.com/nHqipAc5zQ

According to postings on doors of already-closed shops, Friendly’s will try to find placements for employees displaced by the closings. In the meantime, they offer “short term financial assistance.”

For disappointed customers who haven’t heard the news, the posting redirects them to the nearest location that survived the cuts. But in Friendly’s deserts, where there are no other locations within reasonable driving distance, the signs don’t sugarcoat it.

“We apologize for disappointing you on this visit, but this location is now closed for good,” reads a sign on a recently closed shop near Rochester. “We regret that we do not have another Friendly’s restaurant near you, but we hope that you will visit one of our other locations when traveling.”