What It’s Really Like to Work in an Open Office

We asked a WeWork community director and a Wayfair employee for their thoughts. They do not see eye-to-eye. 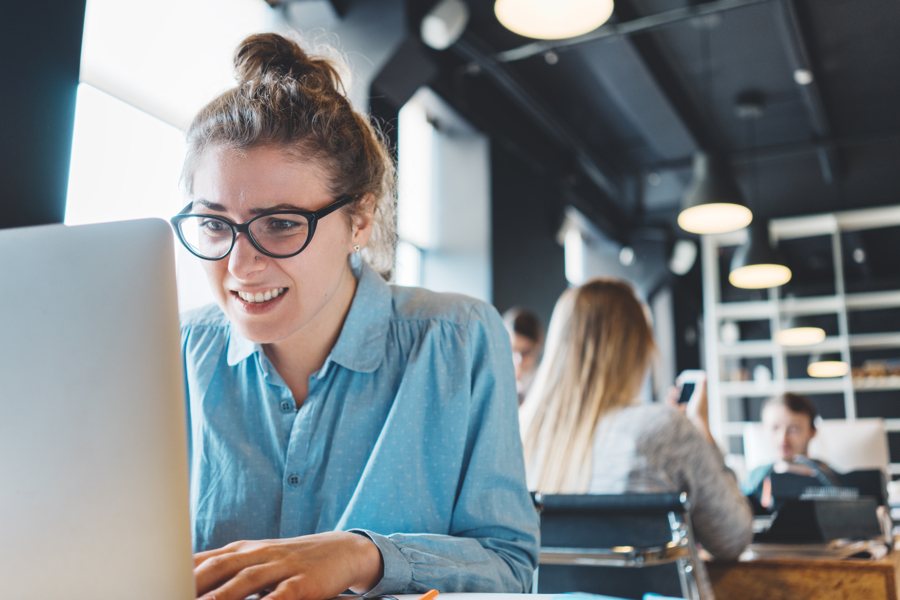 Remember the days when everyone had an office with four walls and a door? Yeah, neither do we.

Instead, many in Boston have been plunked into a new kind of workspace: a communal, deeply un-private arena where employees and managers alike are encouraged to collaborate and co-mingle in close quarters. But new research out of Harvard suggests the in-vogue open floor plan concept may not work as advertised, and in fact can limit face time with colleagues and lead office dwellers to do most of their chatting on productivity platforms like Slack.

So what does the new normal really look like in Boston?

We put the question to Casey Barrett, WeWork’s director of community for Boston and Cambridge, and an employee at Wayfair’s headquarters in Copley Place, who has asked to remain anonymous.

Here’s what they had to say.

Casey Barrett, WeWork: We try to maximize usage of every square foot of every space. It’s good for business, it’s good for the environment. It feels good to be in a space where you know lots of other people are getting shit done. The decision makers that are putting their teams in our spaces are doing it for I think all the right reasons. They want collaboration, they want their employees to work together and to be happy in their workspace.

Wayfair Employee: I’d like a wall. You can’t glance anywhere when you’re in an open office and not accidentally make eye contact with someone and then have the weird awkward thing happen while they’re just forking down a bunch of popcorn from the snack wall. It’s just so strange. One of my seat mates has an issue with the guy that she sits next to. She’ll type to me over Slack, like, “Ugh he just looked at me again.”

CB: Every time we open a new building, it is a latest and greatest iteration. Our hallways get a few inches smaller every time because we want people to collide and we want people to be forced into interactions where they meet their neighbors, or kneel to pet their neighbor’s dog, or bump into someone and have to interact and talk to one another. Otherwise you’d see people, like, just heads down looking at their phones crossing paths in these places.

WE: My department in general kind of likes to eat at their desks so there’s that added layer of fun. Just being assaulted by smells, I guess. It’s not to say that I’m disparaging anyone else’s food or yucking anyone’s yum, but it’s a combination of like a tuna salad and maybe a chicken parm down the way. It’s just a melange of unnatural food.

CB: I know that I’m getting way more things accomplished and saving myself emails or Slack messages all the time because I can just turn around and chat with our director of operations or, you know, a project manager who happens to be in the space.

WE: You get intimate with people in a way that I can’t describe. Like you pick up on their body ticks and things they might do. Like if they whistle a certain way while they’re thinking or if they’re humming a certain way or clucking their tongue. It’s like a strange intimacy that you form with people that you’re sitting that close to—which is not necessarily wanted.

CB: A lot of times when companies come to us and move to an open office space, they have to kind of create new rules. I’m a big fan of talking about the Golden Rule: You should treat space as you want other people to treat it. Our community management teams are happy to mediate if you feel like someone is, you know, misusing it.

WE: I work with a bunch of 20-year-olds. Someone finds a football and they start tossing it around or there’s just general tomfoolery that, I feel like if I had a cubical, I wouldn’t have to deal with. If someone’s having an engagement celebration, or if someone’s having a launch thing for their brand that they just finished working on, there will be champagne popping, literally behind me. I don’t even know what to do. Sometimes I have to go take a walk. It’s tough to focus.

CB: We were going into a workspace where they had a traditional office, closed off offices and a lot of high walled cubicles and when they tore those cubicle walls down, leadership in particular were the worst offenders of raising the standing desk to the highest rung and talking into their headphones and hosting meetings right in the middle of the floor, and nobody felt the courage at this company to say, ‘Hey you need to maybe pop into a phone booth for that.’ There are phone booths on every floor where you can make private or important phone calls. They’re mostly soundproof and they’re tucked into little nooks and crannies so you feel nice and secure.

WE: Millennials are not getting a lot of the perks that previous generations might have gotten, and the work environment is certainly different. I guess I always just expected growing up that I would eventually have an office where I could close the door and make a call without, you know, having to go to a weird phone booth.

CB: We have a high level of trust here. So I have to laugh a little bit when we get some of the complaints about, like, ‘Well this is not private enough for me.’ So I ask a lot of people, like, ‘Don’t you guys all work for the same company?’

WE: Often meetings are in the middle of other people working, so usually we just pick somewhere far enough away from our own team, where any sensitive information would just be falling on the ears of people that don’t know what the hell you’re talking about. I’ve overheard an insane amount of stuff—disciplinary actions, nonsense, so much stuff.

CB: There are definitely days where I want to work from home because I feel like I’m going to be very productive and I can just put my head down and nobody’s gonna ask me any questions, but I know I’m actually not really getting as much done as if I show up and work with all the people on my team.

WE: It’s generally expected that you should come in, but I try to work from home a couple days a month. I just generally get my work done when I don’t have people around me screaming. I just want to be able to not be distracted by every conversation that flies through. I do wear headphones, but I feel like it’s looked down upon if you’re wearing headphones all the time. If you work in isolation it kind of limits your growth here.

CB: To me it’s less of a problem and it’s more of sort of new workplace social cues: If I don’t have the headphones in I could be available for a conversation, but if I have my headphones in, just send me a Slack message or shoot me an email. So it’s about an evolving company culture. When you switch the workplace layout, things will have to change. But I don’t necessarily see that as a negative. I feel like it’s an evolution.

An abridged version of this story appeared in the April edition of Boston magazine under the headline Wide-Open Debate.