Come for the kisses, stay for the clever signs. 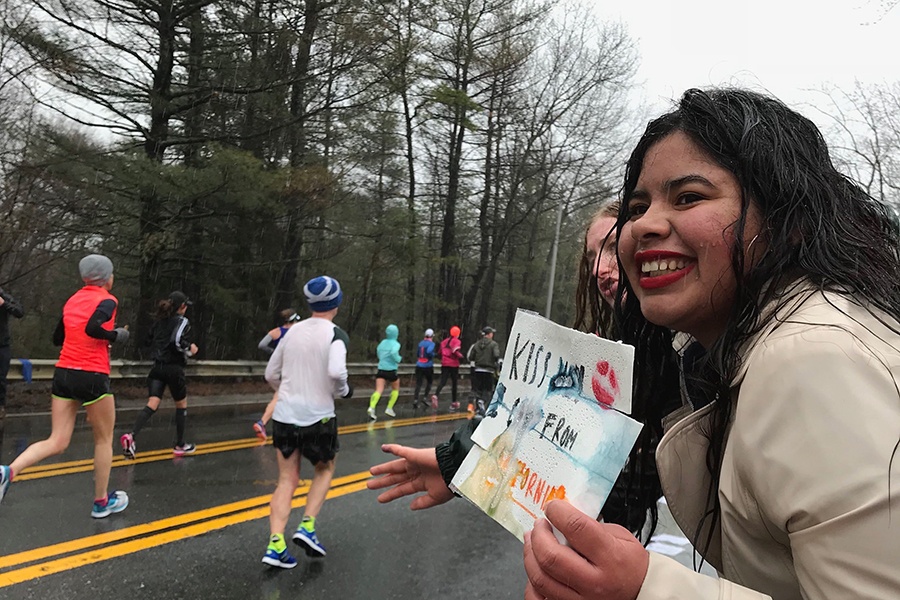 Wellesley College, the historically women’s college in a Boston suburb, isn’t exactly known as a party school, but for at least one day every April students let loose in the legendary Wellesley scream tunnel. Early Monday morning the campus seems quiet, but it won’t stay that way for long, and the pregaming has already commenced. Signs posted in the dining hall remind students to be “silly, not sloppy” as they grab bagels and snacks to fuel them through a day of kisses, drinking, and cheering on runners.

The scream tunnel lies along Route 135, where hundreds of Wellesley students gather no matter the weather to scream their support to runners and offer kisses and good wishes. The tradition dates back to at least 1897, when some Wellesley girls came out to cheer on a friend from Harvard, although by all accounts this was a much tamer version of the race than Patriot’s Day today. Wellesley supporters really ramped up in 1972 when women were officially allowed to run. By 1996, the Boston Globe was referring to the section of the race near Wellesley as the “Screech tunnel.”

Alumna Daphne Matalene was a student at the time and remembers the warm weather and joy in the air as race officials let anyone run in honor of the Marathon’s 100th anniversary. This year, she’ll be seeing the tunnel from the other side as a runner. “I fully intend to take my shirt off when I get to Wellesley,” she says, where she’s going to display a replica of her Class of ’96 sports bra.

Nothing really prepares you for experiencing the scream tunnel. My first year, I understood the concept of a few hundred fellow Wellesley students standing around cheering and screaming, but I was still taken aback when I heard just how loud we could be. Despite the general chaos of the morning, everything is heavily organized. Prepared Wellesley students have completed hundreds of signs requested by the families of runners and hung them up on the opposite side of the barricade before the race starts. The rest of us come a bit later, with our signs freshly drawn. 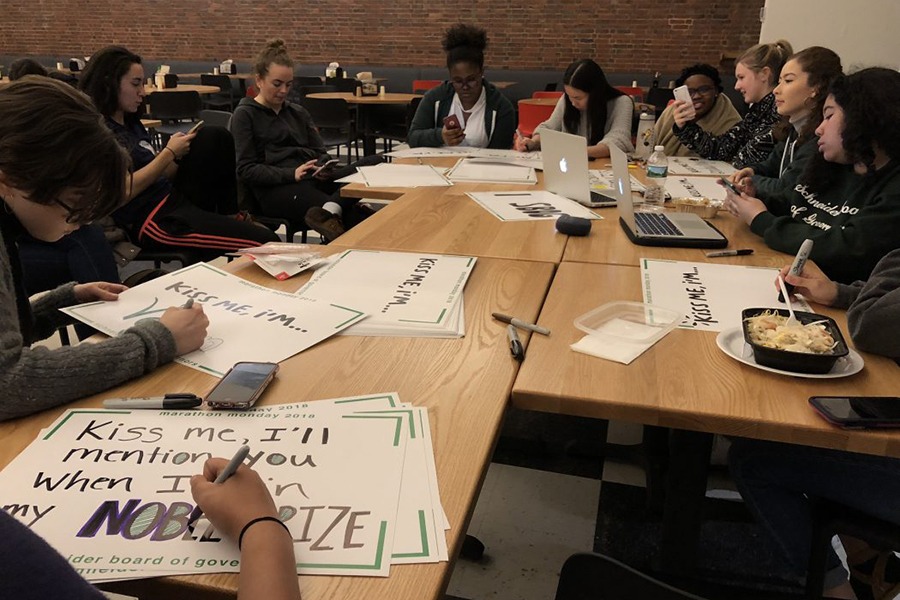 Students line up behind the barricade on Wellesley’s side of Route 135 with their signs. Some are supportive or funny, like the classic “you run better than the government” that appears every year, but most signs invite runners to kiss them. The rules about consent to kisses surrounding the Marathon at Wellesley are a little unclear. Most runners are focused on their times and give a quick peck at most if you have a sign, but some will start at one end of the barricade and make their way down, attempting to kiss anyone at the barricade, sign or no sign. My first year, older Wellesley friends warned me to stick out my hand if someone seemed to be getting too close and I didn’t want a kiss–the usually understood sign for a high five. But after four years, I know what to expect, and I can help show the first years what it’s like to be part of the Scream Tunnel.

“Kiss me, I’m graduating.” “Kiss me, I’m going to Italy.” “Kiss me, I need a job.” These are some of the most common types of signs, following the “kiss me” format with some personal tidbit or fact, but some Wellesley girls are a bit more risqué, wearing tiny outfits behind poster boards that read “If you run fast enough…we’ll drop the signs.” Others turn the halfway point of the marathon into a competition, keeping tallies on their hands of how many kisses they can get.

Runners visibly brighten when they go through the scream tunnel, and many of them pull their phones out to take videos of the crowd shouting and kissing. The rumor is you can hear the screams from up to a mile away.

When the competition for kisses is fierce, the scream tunnel crowd tries to one-up each other with funnier and more eye-catching signs, like “Kiss me, I’m in debt,” and “Kiss me if you’re not wearing any underwear.” As a member of Schneider Board of Governors (SBOG), an organization that plans social events on campus, senior Iletze Porras dressed in a full body costume as their frog mascot her first year, and everyone wanted to post an Instagram photo with the frog.

“Someone made a sign that said ‘Turn me back into a princess,’ and we carried it around…I was handed a variety of babies to take pictures with. Being in the SBOG suit makes you feel like a celebrity. It encompasses so much of the positivity that surrounds Marathon Monday,” says Porras.

Some kissing experiences are memorable, but for the wrong reasons. During her first marathon in 2015, alumna Melina Mardueño was having fun cheering and kissing runners with her friends. “Closer to the end of the race, I turn for a second, and BAM! This dude lays a big wet one on me! It was so gross, there was a line of saliva when he pulled away.” Her friends were laughing, and Mardueño said that she was done kissing runners for the day after that.

Some kisses are short and sweet, with runners barely stopping, but others lead to further communication. Miranda Hardy says one year, “A runner gave me a slip of paper attached to a bar of chocolate that had his number on it. I messaged him to say congrats and he said he beat his record!”

Senior Lara Prebble wanted to connect with other runners from Wisconsin after she saw her friend in a Canadian flag bodysuit get dozens of high-fives from fellow Canadians. She tried to yell to runners from her spot in the crowd, but with all the cheering no one could hear her, so the next year she tried something more attention-grabbing: A cheese head. “The cheese head was a magnet, and I never knew how many Wisconsinites ran the Boston Marathon until I wore that cheesehead. They just kept coming and coming all day.” She wore the cheese head again her junior year, which led one runner to slip her a $20 bill in an envelope labeled “pay it forward.”

“Last year the weather was so miserably cold that my friends and I used the bill directly to get hot chocolate and warm up before going out to cheer on even more runners,” says Prebble. After the race, they paid it forward to microloan organization Kiva.

Don’t worry: Even though the forecast is a bit grim this year, Wellesley students will be out in force, clever signs in hand, ready to make sure the runners hear them from a mile away.