These Guys Plan to Visit—and Rate—Every Library in Massachusetts

They call it the Library Land Project. They're a third of the way there. 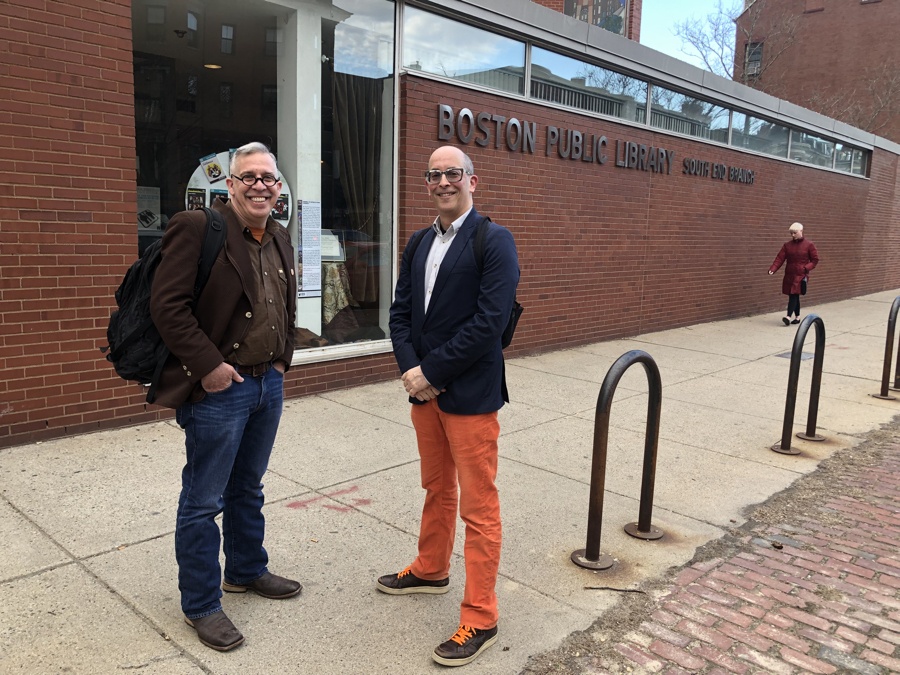 Last month, two MBTA super-fans officially set a world record for their trip to every stop on the transit network. Now, a pair of fanatics for a different public resource have set out on a quest of their own: They want to visit, and rank, every library in Massachusetts—all 483 of them.

For more than a year, Greg Peverill-Conti, of Natick, and Adam Zand, of Arlington, have been driving to new libraries each, tracking their progress on a website, and spreading the word about just how valuable—and under-appreciated—the state’s library system really is. They call it the Library Land Project, they have a truly lovely Instagram account, and they’re a third of the way there.

When I meet the duo at the South End branch of Boston Public Library, the 160th stop on their statewide tour, I find them lounging on a huge u-shaped green sofa near its entrance. They’re gushing about a recent trip to the newly renovated Woburn library, a 19th century building that has just gotten modern updates, including a 3D-printing lab and a vending machine for rentable laptops. “There are some libraries in the state that are just crazy,” says Peverill-Conti. “If you get the chance, you’ve got to go.”

Opening Day at @woburnlibrary – an amazing, world-class building. This place exceeded all expectations – perfect connection of new to the old Richardson building; laptop vend (loaners); study rooms (exclusively for the team at #LibraryLandProject); and a really nice collection of people, dignitaries, donors, architects, residents and neighbors. It zoomed to the top of our rankings (just missing a perfect 5.0) – long may it reign and serve the community. #libraryland #supportmalibraries #woburnpubliclibrary #libraries #library #woburnlibrary

The obsession with libraries began a couple years ago, when the duo launched a public relations agency together and, without a formal office of their own, went looking for somewhere quiet to get things done. Co-working spaces were too expensive. Coffee shops? Too busy. Working from home? Forget it. But libraries had everything: For an investment of exactly zero dollars, they had all the free WiFi and workspace a small business could want, plus satellite offices in every corner of the state.

Their daily ritual quickly turned into something more. “We started noticing little differences between libraries, so we started informally rating them. Then we started going to more and more. At a certain point there was necessity and then there was curiosity, and that just kept us going,” says Peverill-Conti. “Then we were like, ‘Let’s try to go to all the libraries.’” So that’s what they did.

At each leg of the tour, they take detailed notes on how each library stacks up on 11 metrics: parking, WiFi, meeting rooms, cleanliness, completeness, community, friendliness, restrooms, noise, comfort level, and the slightly more intangible, whether it’s a “good place to work.” Scores are given on a five-point scale, and the results are compiled into a constantly updated chart. In the South End, they’re relatively pleased with what they find—a passable meeting room that doubles as a study area, cheery librarians, that comfy green couch. The library will lose points, however, for how noisy it is, and its less-than-inspiring bathrooms. It gets a middling 3.91 out of 5.

Woburn, a solid 4.91, is apparently the best they’ve seen so far. The North End branch, on the other hand, got two thumbs down. It had zero parking, required keys to use the bathrooms, and “felt old,” Zand tells me, so, “We weren’t big fans.” It got a dismal 2.73, third worst on the list. The news apparently did not go over well with a North End librarian, who found out how her branch had been snubbed and protested, pointing out how beloved and well-used it is in the neighborhood. “She had perfect answers for everything we brought up,” Zand says. “But are we going to rush back there? Probably not.”

One of the true joys of venturing into #LibraryLand is the mystery of what we’ll find. We often select a library based on a quirk of the map or ability to visit a neighboring library – or get to a meeting. We typically don’t know much about the smaller towns in advance and can’t even guess about their levels of appreciation/support (or lack thereof) for the local library. As is hopefully obvious, @flintpubliclibrary in the town of Middleton is a gem. #librariesofinstagram #library #librarylandproject #stainedglass #pillow #middleton #flintpubliclibrary #supportmalibraries

There are self-imposed rules for this project. For one, the Library Land guys can’t just drive to their next location, pop in for a minute or two, and cross a library off the list—after all, how can you assign a “friendliness” rating without hanging out for a while and chatting up the staff? They also always get some work done, firing off at least one email before heading back on the road. On average, they hit 5-7 libraries a week, or if their schedule permits it, as many as four in an afternoon.

The journey is about to get more difficult. They’ve been to most of the libraries in Greater Boston, but will now have to travel further west, where it’s less populous and libraries can keep odd hours. Still, they tell me the Library Land Project is on pace to wrap up by the end of next year.

Seeing so many of them back-to-back, they’ve gotten a unique perspective on this new era for libraries, which have a lot more than just books and encyclopedias these days. They’ve seen libraries outfitted with maker spaces, media labs, podcasting studios, pop-up museums, and other attractions. Some have filled their now-useless card catalogues with packets of seeds for gardening. Others are home to hives of bees. They were charmed by the new cocktail lounge at the BPL’s main branch, and were among its first customers.

So maybe their ruthless rating system can raise awareness about libraries that are falling short, and convince taxpayers to reinvest in them. They also hope the trip inspires others to take library tours of their own, even outside the Commonwealth. “We want to promulgate this to other parts of the country,” Peverill-Conti says. “That would be interesting.”

We love libraries. We hope we’ve made that pretty clear. We also love tea and cocktails. We’re celebrating the soft opening of the new Map Room Tea Lounge (@library_tea) at the Boston Public Library in Copley Square. This wonderful spot lets you indulge tea, cocktails, food, jazz music, reading and socializing – all in a library and all at once. Located in what was once the library’s map room, the Tea Lounge is a companion to the existing Courtyard Tea Room. The Tea Room is a more formal place for a classic afternoon repast – with scones! The Tea Lounge is a warm, darkened and friendly place, brimming on its first day with an excited conviviality. The decor plays up the bricks and vaulted ceilings of the room’s past and features many images of maps of the Boston area. We were able to get some client work done up in the Bates Reading Room and then came down to be THE first in line, first at the bar and first to drink at the new Tea Lounge. We actually got a lot of work done here, too. We also caught up with the staff about the Lounge and its opening (we joked with the bartender that our dollar bill should grace the back bar wall). Ryan Clarke, conference and marketing coordinator for The Catered Affair (@thecateredaffair) – the culinary management team for these rooms – was a great guide to the new location and plans for the future. It’s super cool to see the library embracing something new here in the Tea Lounge. . . #LibraryLandProject #Libraryland #librariesofinstagram #supportmalibraries #thecateredaffair #tea #tealounge #bpl #Library #libraries