Michael Flaherty, a South Boston resident, had some thoughts on a bid to charge for parking permits. 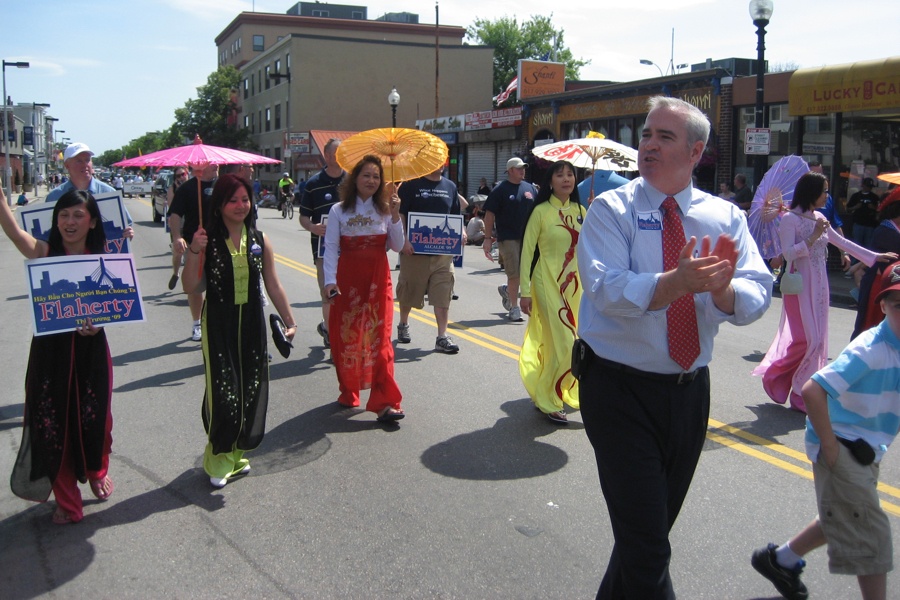 The at-large councilor was among several to oppose a plan from colleague Michelle Wu to make Boston residents pay fees for parking permits, which right now are given out for free. As a way of addressing traffic congestion and an apparent shortage of available on-street parking, Wu has proposed a new $25 annual fee for the stickers, with increased fees for each subsequent car per household ($50 for the second, $75 for the third, and so on).

But new fees are not the way to solve the problem, Flaherty said at Wednesday’s City Council meeting on the issue. After all, think of how much it’d cost him.

Flaherty warned that new fees would encourage people to get fraudulent handicapped parking placards. “That alone is just gonna cause people to say, ‘Oh, I’m not gonna do that. And then they will go to the doctor, they will get the note, they will follow up with the application, and then all of our neighborhoods will have handicapped parking places all over,” he said. “That’s what’s gonna happen. Those are the facts of what potentially could happen here.”

He offered to help organize meetings with neighborhoods about other non-fee-related proposals, and he urged the council not to blame Bostonians who drive for parking problems, but to take a hard look at all the “football field”-size bus stops.

“It’s 2019. We do not need a bus stop on every single street corner. And they don’t need to be a football field in length. They don’t,” he said. “We can talk about bump-outs, we can talk about maybe every other street or every third street. That right there will free up hundreds—hundreds—of parking spaces in every single neighborhood. So instead of us getting in a big fight about circling the block for parking spaces, let’s bring the MBTA in.”

You can watch his testimony here:

His comments quickly ricocheted around the internet, drawing so much heat from Twitter users that his name was briefly trending on the social media platform. One troll even managed to add an update to his Wikipedia page, which remained there as of late Thursday morning. After a sentence about his status as an at-large city councilor, it reads, “He owns 5 personal vehicles and believes that Boston’s parking problems are due to the size of MBTA bus stops.”

Where Councilor Michael Flaherty thinks he lives v. where he actually lives. #Bospoli (after admitting today to owning 5-cars while living in South Boston).‍♂️ pic.twitter.com/bezalWFs5j

Look, if you have five cars I just assume you’re a Transformer and you will not convince me otherwise. #bospoli https://t.co/RRNbW2Pkli

This might be the wildest thing a Boston City Councilor has said in a while https://t.co/kGQr99yEY4