The Pulitzer Prize–winning historian wants the nation to remember its better angels—and hopes his latest book might jog our memory. 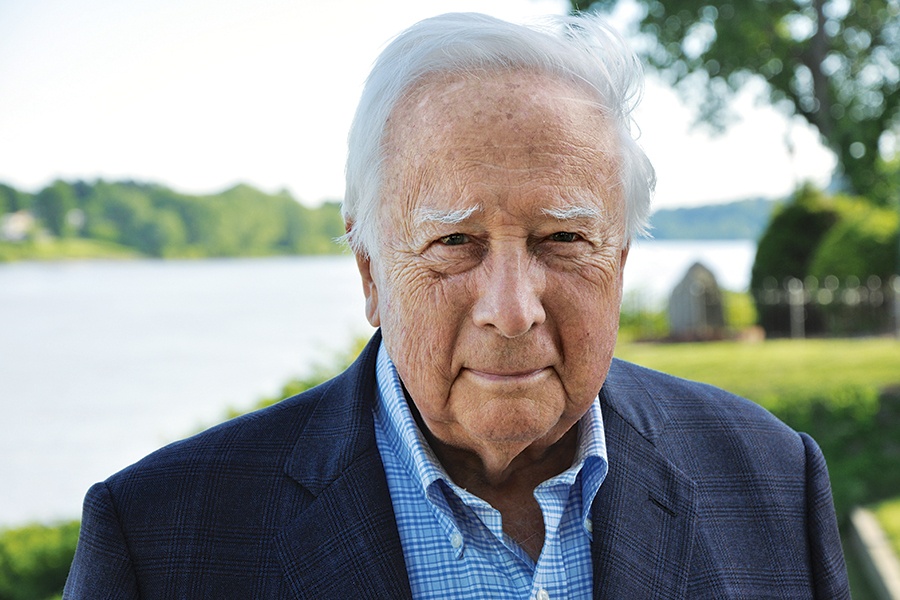 Photo by William B. McCullough

There’s no such thing as boring history, only boring historians. At least that’s how David McCullough, America’s liveliest historian, sees it. As a yarn-spinner, he’s reintroduced readers to three presidents, the Revolutionary War, the Brooklyn Bridge, the Panama Canal, and the Wright brothers’ first flight. As a narrator, his sonorous baritone guided us through The Civil War and The American Experience on PBS. But after more than 50 years behind his typewriter, he’s worried about the state of the country and that our memory of the past is growing frightfully dim. On a recent spring morning, I connected with McCullough at his home in Hingham about his new book, The Pioneers, the historical case for renaming Faneuil Hall, and how he discovered the story he always really wanted to write.

The Pioneers is a book about settlers in Ohio, but also about New England. As someone who has lived near Boston for most of your life, did writing this story bring parts of Boston alive to you in a new way?

I think for those of us who live here in New England, it’s uplifting to see what a New England story this is. The principal characters all come from New England. Their very first gathering before going out and settling the Ohio territory was at the Bunch of Grapes Tavern in Boston. That’s where it all began in March of 1786. There is a plaque now at State Street and Kilby Street. Rufus Putnam came from Rutland, Massachusetts, and the house he lived in is still there. Manasseh Cutler, who was educated at Yale but also had a degree from Harvard, was a pastor of the First Congregational Church in what was then called Ipswich Hamlet—now, Hamilton, Massachusetts. Samuel Hildreth, a young doctor who is one of the most remarkable Americans ever, came from Methuen. The church and rectory where Manasseh Cutler ran a school on the top floor in Hamilton still stands. It’s all still around us within a relatively short radius of Boston.

This book is in some ways a departure for you because it is largely an unknown story. How did you find it?

I was invited in 2004 to give the commencement speech at Ohio University when it was celebrating its 200th anniversary. But I knew virtually nothing about the university. So that’s when I first encountered Manasseh Cutler and the story of his attempt to create what was essentially a New England town in the Ohio wilderness, and how he and the town stood up for both the establishment of education and for keeping the Northwest Territory free of slavery. I was told that his and more papers were down at Marietta College, so after I finished my Wright brothers book, I’d been soaking up Ohio for several years and I went down to the college. When I saw the collection there, my head was spinning, I was so thrilled. I felt like I’d found King Tut’s tomb or something.

Why did this find feel like such a coup?

I was terribly moved as a young man in college by Thornton Wilder’s Our Town, and by Wilder himself, who was a fellow at Yale when I was a student there. After I got started writing history, I thought, Wouldn’t it be great if I could ever find a cluster of people in a town that you’ve never heard of and bring them to life with what they actually wrote and confided to one other, put down on paper in their diaries and so forth. And here was the chance. I’ve been at it for more than 50 years, and there it was like the dream come true.

You’ve said you feel your new book speaks to the current historical moment. Why is that?

The events of the past two years have reminded me how off-track things have gone in this country, of how we need to be reinforced and have our positive attitude about our future reinstated by understanding those who went before us and what they stood for. Loyalty, honesty, a belief that things can be made better, a belief that we can do what seems really impossible. Kennedy had “We will go to the moon.” And we did. And Kennedy used his knowledge of history to inspire us. I was working in New York, at Time and Life magazines, when he ran for office. And when he got elected, I quit and went down to see what I could do for my country, and I wound up working for the U.S. Information Agency for the three years of his presidency. To a large degree, a lot of what the pioneers that I’ve written about espouse or preach to their children is what I grew up with: Make yourself useful; do something of value; make the world, make your town, make your school, make wherever it is a little better. And you’re not in it to make money or become famous. You’re in this for the good of the work, and for the happiness that doing work that you love brings with it every day. And that’s all in the story of these people.

One of the most important qualities that history generates is empathy–to have the capacity to put yourself in the other person’s place.

You’ve spoken elsewhere about the dangers of historical illiteracy. What do you see as being at stake?

There are an infinite number of benefits to history. It isn’t just that we learn about what happened and it isn’t just about politics and war. History is human. It’s about people. They have their problems and the shadow sides of their lives, just as we do, and they made mistakes, as we do. But they also have a different outlook that we need to understand. One of the most important qualities that history generates is empathy—to have the capacity to put yourself in the other person’s place, to put yourself, for example, in the place of these people who accomplished what they did despite sudden setbacks, deaths, blizzards, floods, earthquakes, epidemic disease. It also brings home the fact that we are softies by comparison. The second important thing is gratitude. Every day, we’re all enjoying freedoms and aspects of life that we never would have had if it weren’t for those who figure importantly in history. I think we ought to return to where, in a liberal arts education, everybody should take at least one or two terms in American history, irrespective of whatever their major might be. Just as you should take a term or more in English.

What would you say to a math student or an engineering student who thinks history can be boring and not relevant to them?

History should never be boring. It should never be made boring by boring teachers or by boring writers. It’s about human beings, adversity, high accomplishment, evil, degeneration of values, all of that. And it offers lessons for each of us in modesty, honesty, and reaching out to help those who need help.

We’re in a moment where we’re reconsidering history in the forms of monuments to the Confederacy and names on buildings—specifically, in Boston, Faneuil Hall. What do you make of this trend?

There’s nothing new about it. What is heroic or important to one generation about its antecedents and heroes doesn’t necessarily hold beyond a century or so. And I think it’s justifiable. I do not believe in flying the Confederate flag, particularly on public buildings, and I can understand why some statues seem to be an embarrassment to towns in the South. But to tell you the truth, anything that gets people really curious enough to find out what happened or who these people were, or why it might be offensive to some, is a good thing. We can never know enough about our predecessors and what they did, what they suffered, and their failures.

There are a lot of great stories in your new book. Is there one that stands out to you?

When the Jeffersonians try to bring slavery into Ohio, they have to vote on it in the legislature. It’s the very early days of a legislature in Ohio, and [Manasseh’s son] Ephraim Cutler was deathly ill in bed. He was a member of the legislature, as was Rufus Putnam, who was old enough to have been his father. [Putnam] came in and said, We’re going to have that vote, you have to get up, go over, and vote. And Cutler did, and the existing anti-slavery rule held firm by one vote. So Ephraim Cutler is carrying his father’s banner into the actual battlefield, as it were. And what a moment, what a historic American moment. And yet almost nobody knows anything about it. And that was, for me, the thrill of writing this book—how much of it was going to be new to almost every reader, as it was to me.

In your opinion, what are three books—either fiction or nonfiction—that are essential to really understanding the spirit of the country?

I’d have to give that a good deal of thought to limit it to only three or four. I can tell you that my first encounter with history that just swept me up was a children’s book by Robert Lawson called Ben and Me. But it was about a mouse named Amos, who lived in Benjamin Franklin’s hat. And he’s telling the story: Ben gets credit for an awful lot, but if you want to know the truth, most of the things he is famous for were my ideas. And he then goes on to tell you what Ben Franklin supposedly accomplished. That really got me going. And I’ve read all kinds of history ever after.

What books are on your nightstand right now?

Oh, I tell you, when I’m working on a book, I can’t read anything but what I need to know in order to write the book. So honestly, I’m not reading anything at the moment. Particularly if the book’s going well and the research is red hot, that’s all I want to do. And I also go back and reread to make sure I didn’t miss something, which I often do on the first pass. I probably write each chapter three times to try to get rid of the repetition and the boredom.

With a dozen titles under your belt, do you see a thread running through all the books that you’ve written?

Looking back on what I’ve been writing all these years, I’m beginning to see things that I wasn’t necessarily aware of at the time. Much of what I write is about people who deserve more credit than they’ve been given. People like John Adams, people like Harry Truman, the people who built the Brooklyn Bridge, or these people in Ohio that I’ve written about. They’ve all been unsung heroes. They’ve all been waiting in the wings for somebody to recognize or remember them. And that’s a great feeling, that you’re pulling them out of obscurity because they deserve it. And they’ve been very patient.