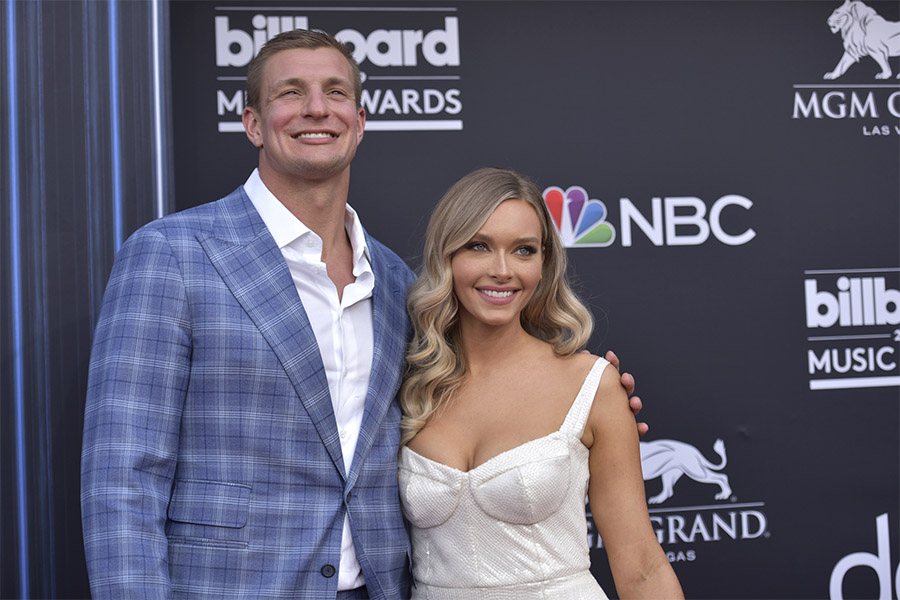 Move over, Ryan Seacrest. There might be a new mainstay on the awards show circuit, and he could definitely take you in a fight.

Not that it would come to a fight for post-retirement Rob Gronkowski, who showed up at the Billboard Music Awards Wednesday night in Las Vegas, dressed as a…security guard?

The tight end walked the red carpet in a dapper plaid blue suit with girlfriend Camille Kostek. To no one’s surprise, he opened his coat to reveal number 87 sewn inside. On second thought, maybe it comes as a surprise that he didn’t choose 69.

But when it came time for the show itself, it was time for Gronk’s costume change.

Gronk is taking part in the opening of the Billboard Musical Awards#patriots @NBC10 @RobGronkowski pic.twitter.com/JPoYSVReoY

The (former) Patriots star stole the show in a tight fitting security guard’s uniform for his acting debut (unless you count this music video from 2017). He played his part well, trying to kick singer Kelly Clarkson out of her seat next to Brooklyn Nine-Nine star Terry Crews to make room for country duo Florida Georgia line.

“We need all the seat fillers to move,” Gronk told Clarkson.

Clarkson played her part right back, joking with Gronk and then eventually giving up her spot to go sing on stage. Their Emmy nominations for best actor and best supporting actress should come in around July.

Gronk has been having a grand old time since announcing his retirement in March. Although some, including Tom Brady, have called for his return to the Patriots, he might be enjoying civilian life a little too much to ever return to the grind of Belichick’s training regime.