How Old Are the “Don’t Dump” Plaques Next to Boston’s Storm Drains?

As it turns out, not very. 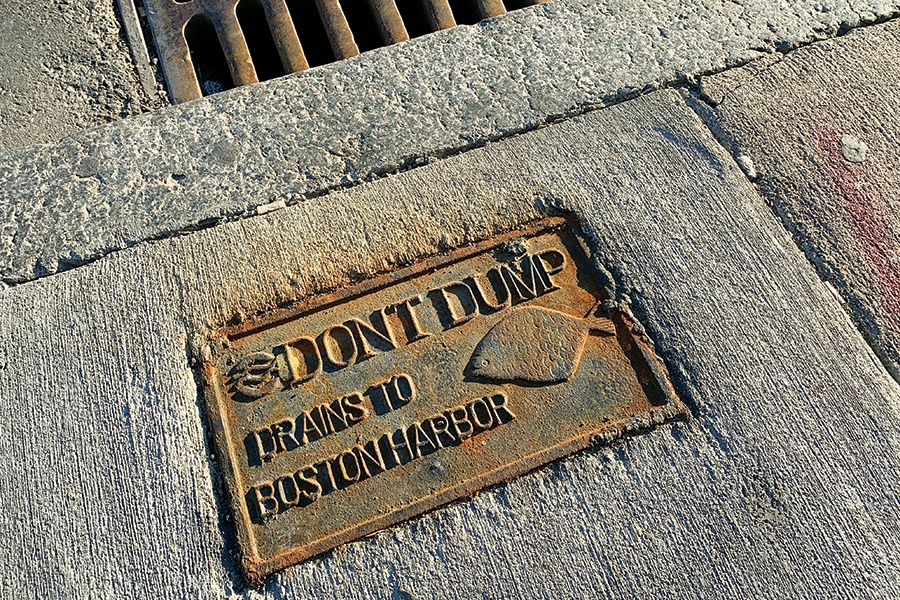 For years, I’ve been curious about those “Don’t Dump” signs on the sidewalk near storm drains, warning you that the water goes to Boston Harbor or the Charles River or elsewhere. They look really old. How did the signs get there, and does the water really drain where they say it does? —A.M., Hyde Park

We have those signs in the sidewalks around the Boston offices, A.M., and I’ve often wondered the same thing. They do appear to be ye olde relics of Boston that charm visitors and make locals feel like they’ve overlooked something in the city’s history. Heck, there was even an art exhibit inspired by them at the Distillery Gallery in 2011.

But after contacting the Boston Water and Sewer Commission, I found out that the plaques aren’t ye olde relics at all. They only seem aged because they’re made of rust-prone cast iron. In fact, the “Don’t Dump” program began about 30 years ago, when the BWSC required contractors to purchase these plaques whenever they built new or reconstructed catch basins as part of a project. Poking around various proposals from the past couple of decades, I found “Don’t Dump” plaques in every corner of the city, from Allston to Charlestown to your own neighborhood of Hyde Park (which drains into the Neponset River, just so you know).

What is old is our problem with storm runoff, since Boston has been paved, at least in part, since the 1700s. Over time, we’ve built up to the 30,000 catch basins and 424 miles of storm drains we have today, and while not all of the pipes drain directly into our waterways, many of them do. That means we’ve been sending lovely nuggets like lead, PCBs, and various bacteria—not to mention tons of litter—into our harbor and rivers for centuries, and we continue to do so even though we’ve done a pretty good job of cleaning them up.

Remember, this is not sewer water, which gets sent for treatment at Deer Island, and yet if you want the clearest but grossest example of storm-water contamination, I still have to discuss poop. For years, the North End has been waging a war against dog owners who don’t clean up after their pets, thus leaving the forsaken feces to flow into catch basins when it rains. Imagine swimming in that at Carson Beach. Apparently, it’s enough of a problem there and around the city that the BWSC has launched an education program, complete with a flyer and a video. So the next time you come across a plaque, remember this key line from the BWSC’s doggy video: “Fido may not know better, but at least now you do.”