It's a turtle inspired by Myrtle, the New England Aquarium's most famous resident. 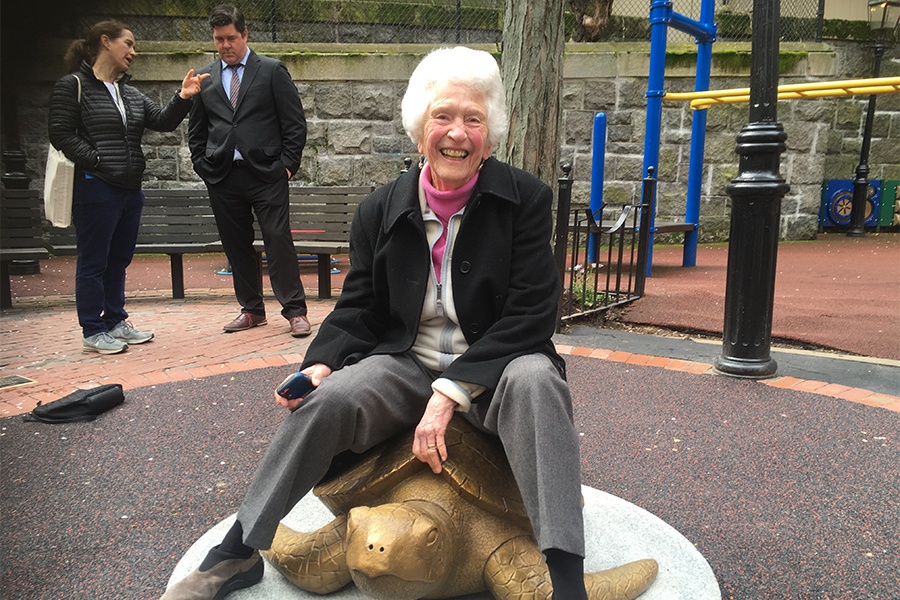 Myrtle the Turtle, a four-foot-long bronze replica of a Kemp’s Ridley turtle, was unveiled in Beacon Hill yesterday. She’s the newest creation by Nancy Schön, the artist behind the Make Way for Ducklings statues, which celebrated 30 years in Boston in 2017. The Kemp’s Ridley turtle is the most endangered turtle in the world.

The statue, commissioned by the Beacon Hill Garden Club, is named after the New England Aquarium’s famed 560-pound sea turtle. Bostonians have been going to visit Myrtle, who is a green sea turtle, in the Giant Ocean Tank for almost 50 years now.

If your kids love visiting "Make Way for Ducklings," they're sure to love the newest sculpture "Myrtle the Turtle!" https://t.co/shA0Vwk26v pic.twitter.com/NbDdewfhno

It’s been more than thirty years since Schön’s ducklings showed up in the Common. The bronze artist also created the statues of the tortoise and the hare in Copley Square. You can spot her work by the smooth polished back from years of kids sitting and playing on it.

Myrtle, installed on the ground of the Myrtle Street Playground in Beacon Hill, is also made to be played on.

“Everyone likes to sit on them, or pat them,” Schön told WBUR. “Whatever I do seems to attract this sort of interaction, which I love.”

Myrtle is truly the star of the playground after renovations ordered by the Garden Club to celebrate its 90th anniversary. It also got Massachusetts-native flowers, new fencing, and a fresh coat of paint on the gas lamps to complete the new look.

Minutes the sculpture was revealed, kids were already climbing over her and getting to work polishing that shell.

Now 91 years old, Schön has been shaping the public arts scene in Boston for decades since graduating from the School at the Museum of Fine Arts, Boston. The Newton artist has also given the city a dragon in Dorchester, butterflies on Francis Street, and a scene from Winnie the Pooh at the Newton Free Library.

“What could be better,” Schön said. “I’m just so happy to be able to do this for people. It’s very humbling, and I’m very proud of all the work that I’ve done.”

Note: An earlier version of this story misidentified what type of turtle Myrtle is. While the sculpture is a Kemp’s Ridley turtle, the New England Aquarium star is a green sea turtle.