The Boston area could see some intense weather, the National Weather Service says. 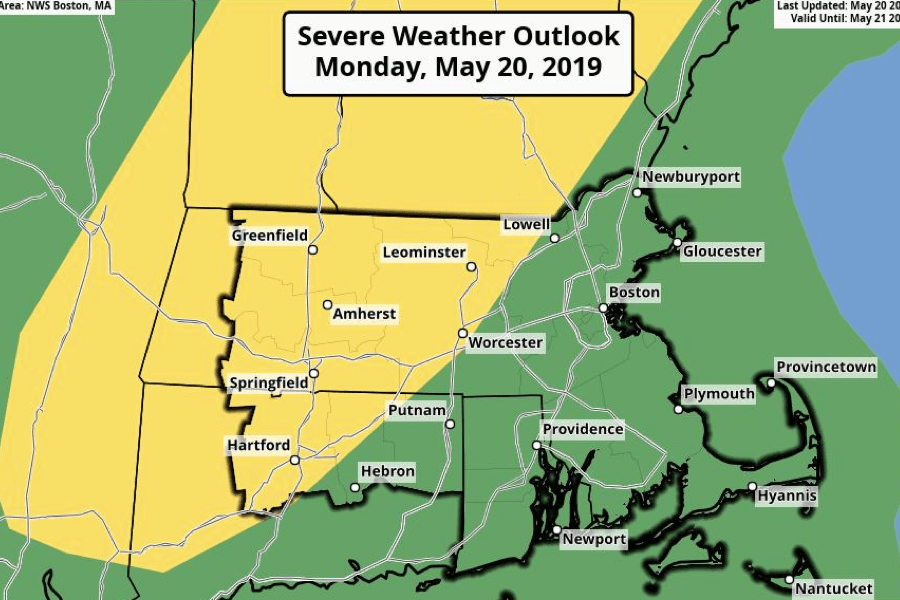 Don’t go running to the basement just yet, but the National Weather Service is warning of intense weather headed to Massachusetts on Monday, which could mean severe thunderstorms or even tornadoes.

In Boston, temperatures are expected to climb as high as the mid-80s Monday afternoon, and as a storm system makes its way across the state, the highest risk of extreme weather is expected to kick in at around 5 or 6 p.m., according to NWS meteorologist Lenore Correia.

[745a] Most of the region will be in the 80s today, with the exception of the southeast coast. So far this year, Hartford is our only climate site to have already reached 80°F before today. The average first 80°F day for Boston, Providence, and Worcester is May 4th. pic.twitter.com/jbSkXG4TLO

Short-lived but powerful storms, isolated thunderstorms and powerful winds, and hail sized up to an inch or two inches are more likely out in the west and northwestern parts of the state, the Weather Service says, but still possible closer to the city. The conditions may also be right for tornadoes to form.

“There’s a cold front approaching the area and we’re going to have a storm that will form along that boundary,” Correia says. “Really warm temperatures will help that instability.”

She says that as of Monday morning the risk of tornadoes remains pretty remote, but it’s worth being alert regardless, especially if you commute by car or have plans to be outside.

A few strong to severe t-storms are possible between 2 and 9 pm. The greatest risk will be NW of the Boston to Providence corridor, especially across interior MA and N CT. Damaging wind gusts and large hail are the primary severe weather risks. pic.twitter.com/jsox4QwvM0

[920a] Central/western MA and northern CT remain in a slight risk for isolated severe thunderstorms this afternoon & evening. Main time frame will be between 2pm-9pm. Damaging wind gusts and large hail are the primary severe weather risks. pic.twitter.com/cfCunvFE0f